Even lesser known than the Fiend Folio is the Obscure Octavo, a tome of creatures misbegotten and bizarre. Lurking within these pages of the aged is a menagerie of critters better left undisturbed. Today, gentle reader, I boldly throw open the cover of said text to bring you two monsters to challenge your intrepid adventurers. Join me now as we confront this duo of the dark dungeons… 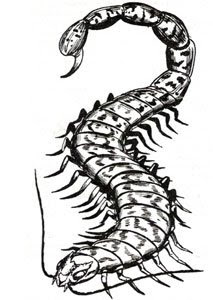 This nauseating creature appears to be a large black centipede, whose body ends in a curved stinging tail. The many legs of this creature are a sickly yellowish-green color. A bitter smell, probably originating from the viscous liquid that drips from the tail’s stinger, accompanies the creature. It makes an unnerving skittering sound as it crosses the hard stone of the dungeon’s floor.

Combat: A scorpipede shares the aggressive nature of its scorpion ancestor and is 95% likely to attack if approached. The scorpipede attacks with both a venomous bite and a poisonous sting, combining the worst aspects of its species of origin. The bite does no damage, but the victim must save vs. poison at +4 or be paralyzed for 2-12 hours.

The stinging tail packs a more powerful venom. A successful hit from the tail does 1 point of damage and requires a save vs. poison at +2 to avoid the Type A poison (15/0 points of damage). A scorpipede that is reduced to 1 or 2 hit points goes into a stinging frenzy, making two attacks with its tail each round until slain.

Habitat/Society: Scorpipedes are usually encountered in swarms found nesting within dark, dank caverns, ancient ruins, refuse heaps, and other unpleasant locales. While they are accustomed to living in sizable groups, they do not cooperate in hunting for prey, usually seeking to dine on small mammals, reptiles and insects. They will compete for the same prey, even resorting to attacking each other when food is scare.

Ecology: The exact origins of the scorpipede are unknown. Sages favor one of two theories: that they are either an experimental crossbreed created by an insane mage or that they were brought into being when the Gods of Eld created the first dungeon and, having forgotten whether they had stocked the upper levels with centipedes or scorpions, decided to split the difference. In either case, since their creation, they’ve found a comfortable niche in the” vermin” tier of the local ecosystem. While possessing no treasure, their venom is of use to alchemists and assassins, both of whom offer good coin for relatively intact specimens of the species.

Climate/Terrain: Any large body of acid 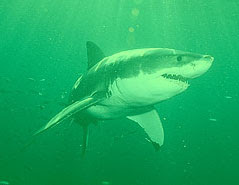 Acid sharks resemble a normal shark of their original species (great white, hammerhead, mako, tiger, etc) except for possessing a green coloration and the noticeable difference that it’s swimming around in friggin’ acid!

Combat: Acid sharks will bite anything that gets near them. They possess a ravenous hunger, stemming from the fact that they live in large bodies of acid, which are notoriously scant when it comes to things to eat. Their bite does normal damage to its victim plus an additional 1d6 points of acid damage. But considering that their prey is most likely already swimming around in a pool of acid, they’re probably either immune to acidic effects or have more pressing acid-related concerns.

Habitat/Society: Acid. Big honking vats of it. Not really that social, considering the difficulty of meeting new friends when you spend all your time SWIMMING IN ACID!!!

The origins of the acid shark are unfortunately not shrouded in mystery. It is the creation of the mad arch-mage Yaque Kuztoe, who thought it be really nifty to have sharks that could live in acid. After plunging several thousands of sharks into his aciderium, he finally found one that didn’t seem to mind it so much. The multiverse shudders to think that he might someday find another shark that enjoys it, thereby establishing a breeding pair.
Posted by Michael Curtis at 9:01 AM

Just remember, my little dragonettes, the sages of Stockwood warn you not to eat the brown acid sharks!

I KNEW those damned things were scorpapedes!

Even the other adventurers were getting confused by the numerous creepy crawlies (and the fact the DM was confused himself).

Maybe I ate a brown acid shark before the game. That's the story I'm going with.

BTW - from now on, Room 52 in B4 will have an acid shark in it when I run the adventure for the next generation of D&D newbs (which should be Aurora and Viv in about 8-10 years).

Next up... Rabid acid sharks.

I toyed with a rabid acid shark varient, but the best anagram for Alton Brown I could come up with was "Ant Lowborn."