Description: This odd-looking cutlass is constructed of an unknown wood. In place of the traditional sharpened edge, dozens of shark’s teeth adorn the weapon, providing it with a razor-sharp blade. The Blade of Bru’ce is accompanied by a curved wooden scabbard wrapped in shagreen.

History: The Blade of Bru’ce was originally created for a tribal chief amongst the islanders of the Maoli-p’Tan Archipelago. Crafted by his tribe’s shaman, the weapon draws upon the powers of the tribal totem, the God of Sharks known as Bru’ce the Tireless Eater. Passed down through the ruling generations, the sword’s power gave the tribal leaders a fierce reputation as wanton killers in battle.

The explorations of Yannu Kuk, the great half-orc sea captain, brought him and his men into conflict with the tribes of Maoli-p’Tan. In his initial successes, Kuk defeated the ruling chief and claimed the Blade of Bru’ce as tribute to bring back to his royal financiers. Kuk’s explorations turned sour soon after, leaving both him and most of his crew dead on a tropical beach. The surviving members of the exploration limped back to the pirate haven of Breezy Bay, where the Blade was lost in a game of draughts. Its current location and owner is unknown. 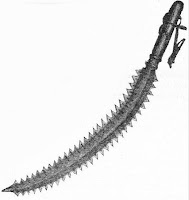 Game Notes: The Blade of Bru’ce acts as a sword of sharpness; its razor-toothed edge slicing through the exposed flesh of an enemy’s extremities. In addition, the magical energies which give the sword its power, grants the weapon an animalistic sentience.

The Blade possesses an INT of 12, an Ego of 3, and is of absolute Neutral alignment. It can detect invisible objects in a 1” radius. The Blade is docile when first encountered and will not attempt to initially influence or dominate the wielder. Once combat begins, however, and the Blade has drawn blood, the animalistic energies of the Shark will attempt to drive its owner into a frenzy of bloodletting. Resolve this potential personality conflict as described on pp. 167 of the 1st edition AD&D Dungeon Masters Guide. In the event of a conflict, the Blade will demand that the wielder attack the greatest threat currently facing the owner, seeking to quench its blood-lust in doing so.

Should the sword dominate its owner, the wielder immediately succumbs to a frenzied rage. In this state, the wielder gains +2 on all rolls to hit for the duration of combat. He is immune to psionic attacks, charm and fear. All damage inflicted upon the wielder is reduced by 1 point. He will disregard any commands to retreat, cease fighting or spare an enemy while frenzied, seeking to only to slay his opponent. Once that task is accomplished, the wielder will seek his next enemy. There is a 20% chance that he will simply attack the next closest living creature, even if that being is a boon companion. Otherwise he will engage the nearest enemy.

Once combat has ended, the blood-red rage leaves the owner of the blade, leaving him extremely fatigued. He suffers a -4 to all his attribute scores, saving throws and combat rolls. He movement is reduced to ¾ his normal rate. This condition remains until the character rests for two consecutive hours, engaging in no activity more strenuous than eating and drinking. After such time, all attribute scores return to normal as does his movement. Depending on the results of the previous combat, however, there may be some long-term damage to his reputation amongst his fellow adventurers.