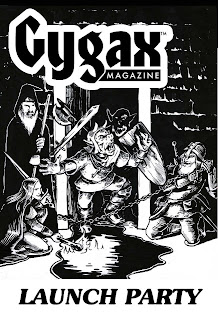 In case you somehow missed the news, this coming Saturday is the Launch Party for Gygax Magazine. It will be held at the Brooklyn Strategist (a place I've visited before for the Dave Arneson Memorial Game Day) and the event run from 1:30 PM to (I believe) 7:30 PM. The event will be streamed online for those folks unable to make to trip to the majestic borough of Brooklyn that day.

I'm currently planning on attending, but Mother Nature might be having a few words with us here in NY tomorrow. Ultimately, road conditions and whether or not the streets of Brooklyn are piled high with plowed snow will determine if I show or not. I'm keeping my fingers crossed and anticipating making the trip.

For those people planning to be there in-person, RSVPs are required to get the free tickets needed for entry. Make sure you get your ticket before turning up at the door!
Posted by Michael Curtis at 7:36 PM 2 comments:

Chaosium reported today that Lynn Willis, co-creator of Call of Cthulhu, has passed. As a long-time fan of CoC and Mr. Willis' work, I suspect I speak for many when I say he will be greatly missed.

We are sad to announce the passing of Lynn Willis, a pillar of Chaosium,Call of Cthulhu,and of the roleplaying community. Lynn had been combating aging and illness for several years, and passed while in a hospital for treatment. He is survived by his partner Marcia, and a community of friends and admirers.

Lynn began in gaming as a board game designer, and entered Chaosium with Lords of the Middle Sea. He was the third employee of Chaosium, first as an editor and then as the mastermind behind the entire Call of Cthulhu line, as well as other projects, for the decades that he was with us. He loved his work and brought all his abilities to the job. He was incredibly smart, astonishingly widely read, detail oriented, and capable. He is largely responsible for the high quality, playability, and popularity of the leading horror RPG in our field. 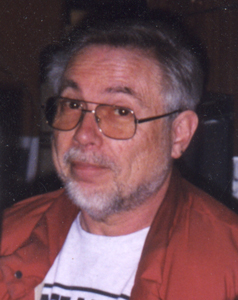 He will be missed. We trust that he is at peace. We give Marcia our thanks and blessings for her devoted love and support for Lynn, and wish her joy, happiness, and success in her future endeavors and memories of the past.

I’ve been a vocal advocate for the “shared world” experience in role-playing games. Although the referee is responsible for the majority of the heavy lifting when it comes to detailing the campaign world, I don’t believe he or she should be the only one carrying the load. As a game master, I encourage player creativity to help fill in the unpainted corners of the world we’re all exploring and experiencing together. It not only jump-starts my own creative process, but allows for a greater investment in the setting on the part of the players.

The following is a result of that refereeing style. In my Kingmaker Pathfinder game, the party’s wizard often refers back to his time at the magic university he studied at prior to his adventures in the Stolen Lands. Player Rich has elaborated a wonderful backstory about how his wizard paid his way through college as a bootlegger brewer and regularly provides bits of information and lore with the preface “When I was studying magic in Strormfast…” I, for one, believe such creativity should be rewarded, and, inspired by Rich’s anecdotes, have sketched out a brief description of the hitherto unnamed university his wizard attended. Rich’s wizard is of the evoker school and, based upon his usual method of prying information from prisoners, I thought the benefit provided for studying evocation at the Ashgate Academy is fitting.

The Ashgate Academy can easily be dropped into any 3.5 or Pathfinder campaign with a name change or two. Older editions of the game can utilize the Academy with a little mechanical tweaking.

Founded in 1499 G.C.R., the Ashgate Academy is one of the few renowned and respected schools of the magical arts in the harsh northern kingdoms. Situated in Strormfast, the college earned its name from the site of its construction. The Academy stands at the base of Pyre Cliff, the traditional site of cremation for the city’s dead. Following the incineration of the deceased’s mortal remains, the funeral procession bearing the ashes pass through a wrought-iron gate erected at the base of the cliff. The Academy’s main building faces this “Ashgate,” thereby earning its designation. The Academy’s sigil is a crimson flame inside the archway of an argent gate on a field of deep azure.

The Ashgate Academy is best known for producing exceptional practitioners in the schools of enchantment, evocation, and necromancy. Instructed by masters of these magical arts, the graduates of these three schools enjoy a minor benefit from their education. These benefits manifest as follows:

Graduates of Ashgate Academy’s enchantment college are well-schooled in the identification and classification of magical auras. Enchanters of the Ashgate Academy gain a +1 circumstance bonus on Spellcraft checks made to determine the school of magic involved in a magical aura or to identify the properties of a magical item when using the detect magic spell.

Graduates of Ashgate Academy’s evocation college are famed as battle wizards and feared for their ability to rain destruction down upon enemies. Evokers of the Ashgate Academy receive Intimidate as a class skill.

Graduates of Ashgate Academy’s necromancy college receive intense training in the funeral practices and beliefs of many diverse cultures. Necromancers of the Ashgate Academy receive a +1 circumstance bonus on Knowledge (religion) skill checks regarding funeral rites, afterlife symbolism, and the identification of deities possessing the Death domain.

1) Finish Stonehell 2: I’ve made a great deal of progress on the book in the past several weeks and the three-year-long delay is finally being defeated. I’m finishing up Level 9 at the moment, leaving me with just four more quadrants to complete before the most daunting portion of the book is conquered. I remain hopeful I can debut the book at Gary Con V, but will settle for unleashing it in June at NTRPG Con if things go amiss. Regardless of actual release date, this is the year it escapes into the wild and I can cross it off my “to do” list.

2) Keep writing: Like academia, freelancing is strictly “publish or perish.” My workload in 2012 grew larger and I intend to exceed what I did this year in 2013. I’ve got some scheduled projects already and a few pitches in the air that I’m waiting on responses to. There’s also a post-Stonehell project of my own which I intend to get out there this year. I’ll have more on that in the near future.

3) Broaden the scope of my design work: Most every writer and designer wants to prove their talents are applicable across a wide field and that they’re not limited to a single system or genre. I’m best known for my old school fantasy RPG material, but I want to do more with different games and genres. The game I did for Goblinoid Games that should see print in 2013 is a step in the right direction, but I hunger to do more. This desire will hopefully take me out of my comfort zone, but that’s the only way to grow and to build a reputation for versatility. Hopefully, this is the year I make that break.

4) No more damned miniature buying until I get some figs off the damned worktable: A refrain everyone who dabbles in painting minis is no stranger to. I don’t especially need more figures and I’ve got enough to keep me busy throughout the year. Once the backlog gets hewn away at, then I’ll consider future purchases.

5) Run games: Outside of the convention scene and a few pick-up one-shots this year, I played more than I refereed, and that’s not what I enjoy most about this hobby. I’ve got three campaigns in mind for 2013. One is Pathfinder’s “Kingmaker” Adventure Path, which I started, but never got a chance to finish. The second is Gamma World, a game I often dabble with, but never get off the ground. The third is a playtest campaign for my new project. The “Kingmaker” and Gamma World campaigns are symptomatic of my wish to step away from the dungeon-centric game and get back to the hexcrawl. Once Stonehell 2 is done, I need wide-open spaces and exploration on a geographic scale. I’m itching to world-build, and both those games will give me the opportunity to do so.

That’s it. Although apparently short and simple, those are pretty sizeable goals for the New Year, ones that will occupy a lot of my time. But I’m happiest when I busiest and these five look like the makings of a pretty happy 2013 to me.
Posted by Michael Curtis at 9:01 AM 4 comments: