Video Review of The Dungeon Alphabet

Working Around the Purge

EDIT: I've been informed that the below are no longer hosted on WotC's servers, but I will leave the links in place as a record of what old school products were once available for free courtesy of Wizards. A moment of silence please for their passing.

This is probably too late to make this week’s Underdark Gazette’s list of free stuff, but here it is: Nevermind.

Thanks to reader mark.argent’s suggestion of using the Wayback Machine to track down the proper urls, below you’ll find links to all the available free and legal PDF (and other format) products that Wizard’s used to host in the Older Edition Downloads section before it went away. These are still on their server, but who knows for how long. This might be the last chance to see, people, so grab what you might find useful before they go away for good!

NOTE: While the files I’ve tested worked, I’ve not had the chance to check all of the links. If you find a bummer, leave a comment and I’ll either check to link’s HTML or make a note of it as inactive.

Classic Modules
I10 Ravenloft II: The House on Gryphon Hill
Palace of the Silver Princess (B3)
Dungeonland and The Land Beyond the Magic Mirror (EX1 & EX2)

Coats of Arms of the Savage Coast

Is This The Final Purge?

I've noticed that for the past few weeks, the link to the Old Edition Downloads section of the Wizard of the Coast website has been a dead link. While it is still possible to find your way to some of the PDF versions of older showcased modules like The Palace of the Silver Princess or Ravenloft II, you have to know what you're looking for because the main page is no longer valid.

While it's possible that this might simply be a matter of a change to the informational architecture of the site, I have an uneasy feeling that it's truly the death knell for getting legal PDFs of older products. That's a shame, because I was really looking forward to browsing some of the classic Realmslore products that were once hosted there.
Posted by Michael Curtis at 1:04 PM 12 comments:

Today’s session of Watchfires & Thrones saw three of the characters deciding to foray into Stonehell to earn cash and experience while everyone else trained for next level. What was intended to be a simple sweep of the gatehouse turned into them getting dragged into the middle of the great Orc-Goblin War of Stonehell Dungeon.

The three 1st level characters (a fighter, magic-user, and fighter/cleric) led an attack into the orc lair, urging their war band of seven goblins (including their newfound friend “Schnot” from the gatehouse) and a mangy wolf against the orcs’ superior numbers. The result was fourteen dead orcs, six dead goblins (including their newfound friend “Schnot” from the gatehouse), one dead wolf, and one PC reduced to zero hit points. The orcs won the battle, resulting in the two mobile characters dragging their unconscious friend towards the exit of the dungeon. When one last wandering monster turned up SOMETHING coming their way, the PCs dodged into a side room where they are currently praying that whoever’s coming down the hall passes them by.

We’ll pick up with them next week to see if they escape the dungeon and meet up with the returning players’ alternate characters, or if they too will be rolling up new characters to play. Their reward for the brashness: 100+ silver pieces and slightly more than 500 experience points each. Two of them made second level due to their brashness—provided they make it out alive.

This was one of those classic sessions where I had no idea what to expect going into it and I was just as surprised and entertained as players while we watched the day’s events unfold before us. And it all hinged on a single reaction roll and the fact that the dice determined that one of the goblins spoke Hobgoblin, allowing the PCs and monsters to communicate. This session was one the best we’ve had so far. It had humor, suspense, PC-NPC interaction, funny voices, a big fight, and not a single railroad track in sight.

I love it when the dice know what they’re doing.
Posted by Michael Curtis at 10:55 PM 2 comments:

Two Down, Three to Go 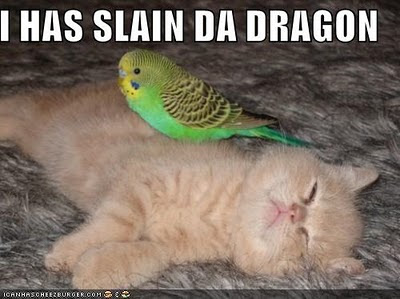 I got sidetracked and didn't get to my magical mystery project this week, but instead finished up my contribution to a very NiftyCoolWow project I was asked to help out on. That one's been an ongoing concern and I wanted to get it done and out before I got back to playing with my own book. And this one required me to be in a specific frame of mind to do properly. I'm certain people are going to think this book's pretty hip once it comes out, so stay loosely tuned for more details. I let you know the deal once it becomes an actual thing and I get to OK to chat it up.

So for those of you who are waiting on notes regarding artwork or maps, I beg your indulgence. I'll try to get some specifics out to you all by the weekend.

After seven months of working on projects but not getting to the finish line on any of them, it seems the log jam is finally breaking up. That's a balm on my fevered brow. I was beginning to get worried.

Of course, now that slots are appearing on my To Do List, new projects are jabbering for my attentions. I don't know if I'm strong enough to ignore them...
Posted by Michael Curtis at 7:37 PM No comments:

I've been listening to one of my more obscure LPs lately while wrestling with a piece I'm working on. It's the album "Cacophany" by the British punk ensemble Rudimentary Peni. The album is composed entirely of songs inspired by Edgar Allan Poe and Howard Philips Lovecraft. It's a bit of an acquired taste but I've had it on vinyl since my college days.

One song on the album, "Imps of the Perverse," features a particularly humorous rant against Grandpa Theobald. I enjoyed it for years before I learned that the rant did not originate with the band, but with Avrim Davidson, the executive editor of Fantasy and Science Fiction magazine, who wrote it as a review of The Survivor and Others in 1963. It was intended in good fun.

I recently discovered that some wag put together a video featuring the song and placed it up on Youtube. The staccato appearance of the song's captioning just cracks me up. I'm not sure if Lovecraft would have approved, but I'm pretty sure Two-Gun would have cracked a smile.

Labels: humor, music to game by

One Down, Four To Go 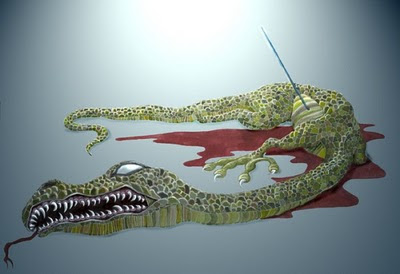 Time to get started on the next project while I'm waiting for this one to bleed to death. Unnamed mystery book, I choose you!
Posted by Michael Curtis at 10:33 PM No comments:

Update on the Cover Artist and Cartographer Hunt

I’ve selected both a cover artist and a cartographer for my still-unnamed project and have provided them with some of the initial material to start work. I believe that I’ve contacted everyone who sent me a letter of interest and samples, but just in case I missed somebody I wanted to make it known that my picks have been made. I’d also like to thank everyone who expressed an interest in helping me make this book a reality.

For those of you who contacted me about doing interior pieces, I’m currently fleshing out my outline for the book so I’m not 100% certain what my interior art requirements are going to be yet. Give me a week or two and I’ll be able to assemble a specific list of pieces I’d like to see represented.
Posted by Michael Curtis at 2:01 PM 2 comments:

With apologies to Sham for stealing his bit.

Posted by Michael Curtis at 12:08 AM No comments:

Labels: music to game by, philosophy

Since Lord Kilgore reported a sighting yesterday, I may as well break the news: Borders Books has made arrangements with Goodman Games to stock select stores with copies of The Dungeon Alphabet. I'll err on the side of caution and not reveal anything more than that at the moment. Once I get the official O.K. as to what I can make public, I may follow this post up with additional information.

It's probably needless to say this, but I'm extremely proud of this development. I think getting the DA into the Borders Books' distribution chain is a milestone for the OSR. I won't claim it marks the start of a new Golden Era for old school games, but by putting in on the shelf next to 4th edition D&D splatbooks, it may get new people interested in what it is we're doing here--and that's always a good thing.

Having the books sell is also in my interest as well--there's no denying that. So if you happen to walk down the aisle at your local Borders and see a copy sitting on the shelf, why not pick it up for yourself or buy it for a friend if you already have one ($9.99 is a very reasonable price). At the very least, pull it out and "face" it on the shelves so that everyone can catch a glimpse at the Erol Otus cover and wonder what exactly this book is all about.
Posted by Michael Curtis at 9:01 AM 11 comments: