The “Out of the Box” Project

Some months ago, I read a series of blog posts over at A Fistful of Coppers and Huge Ruined Pile that excited my eclectic taste in gaming. I thought the idea was an intriguing proposition and I wondered if I’d be able to compartmentalize thirty years of gaming experience and preconceived notions to come up with something very different from my default D&D milieu.

Since a good portion of the Watchfires & Thrones crew had other business on December 12th, we decided to take that weekend off. But I’ve had a hankering to try something different if only to shake up any growing complacency on the referee front. I’ve therefore decided to take advantage of the lull in regular sessions and shift gears a bit. Thus, the “Out of the Box” Project was born. Inspired by a post Sham did some years ago, one that hit me right in the crazy-go-bananas bone, I put together this: 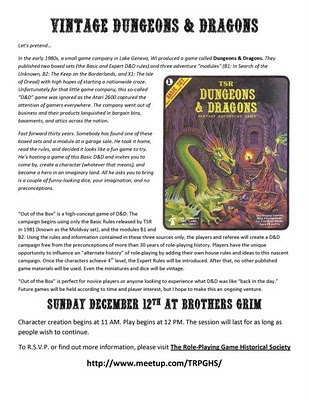 I’ve sent the word out through the Meet-up group, hung a flyer at the FLGS, and told the owner of my intentions. Now we’ll just see if anyone shows up. If it goes as good as I hope, it could even become that secondary campaign I’ve been threatening for months now.

To prep for it, I’m expanding the wilderness map from B2 to include a little place called The Haunted Keep and Quasqueton. The other tower and gatehouse of the Haunted Keep have been stocked and both the lower levels of that place and the entirety of the Cave of the Unknown are being prepared. That brings the total number of available dungeons sites to four when you include the good ol’ Caves of Chaos. Plenty of place to explore before 4th level arrives and the Expert Rules are introduced.

The background of the setting is being sewn together from some of the information presented in B1 and B2, but I’m not going too far beyond the idea that “The lands of Law are here. The lands of Chaos are there, but they’d really like to have all this land too. Somebody go do something about that, will you?” Hawkmoon is whispering quite loudly in my ear, too. We’ll see what happens with that.

Posted by Michael Curtis at 4:53 PM

Labels: Moldvay Basic, Out of the Box

Sounds like fun, Michael: keep us posted how it goes over, please :D

You may also be interested in an upcoming Pacesetter OSR module for your project:

===
RC4 Legacy of the Unknown - It has been 31 years since the release of the first basic module ever printed. In searching for the unknown, treasure and glory were claimed. But what happened to the famous Zelligar and Roghan? Only by following the path of the famous duo can the mystery be solved. 2nd to 4th level.
===

See http://pacesettergames.com/future_releases for the original posting.

I too have been hearing the siren song of Hawkmoon and entertaining ideas about gaming in Tragic Millennium Europe lately but I'm not sure whether to approach it via D&D, BRP, or Barbarians of Lemuria.

Your expanded B2 project sounds cool. Maybe somewhere deep in Quasqueton there's a Nexus point connecting to the labyrinthine sewers of Londra...

Glad somebody remembers that promise I made. Thanks to graduate school, I haven't been able to keep it recently but it's still on my mind every day.