Last year, as I was putting together the first Stonehell Dungeon book, it became clear that I had more stuff to cram between its covers than I had space for. Rather than wait until the sequel came out, I decided that I would launched a series of supplemental PDFs to be used in conjunction with the main books. The material included in these supplements was intended to be just that – additional information that could be used or discarded without affecting the overall dungeon. Not only would this allow me to release the game information that had to be trimmed due to lack of space, but it also gave me a way to continue to build on the Stonehell Dungeon setting after the second and final book was released.

It was and remains my intention to limit these supplemental releases to a strictly PDF format. Since each would be relatively short in pages and word count, it didn’t make much sense to go the printed route. It also would keep them cheap to produce and I could then pass the savings along to you, the potential consumer. Each supplement would be available on my Lulu storefront for no or low cost.

The very first of these supplements, The Bandit Caves, was released in conjunction with Stonehell Dungeon: Down Night-Haunted Halls. It was and is a free PDF file that details the lair of a bandit gang who has unfinished business within the dungeon. From the feedback I’ve received, people seem to enjoy it and have a lot of fun customizing the bandits and their aims for their own campaigns. My own players just got around to tangling with those outlaws the other week and barely escaped with their lives.

It has been nearly a year since that first supplement was released, and I didn’t want 2010 to end without some new Stonehell material seeing the light of day, especially since it was my original intention to have the sequel out by the end of this year. I mentioned previously that my workload for this year has made that an impossibility, and you’ll have to wait until 2011 to see the final book. In light of these events, I’m pleased to announce that the second Stonehell Dungeon Supplement will be available tomorrow. 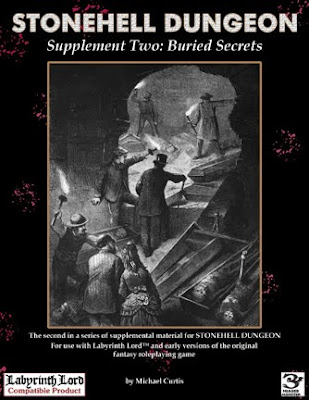 Entitled Buried Secrets, this 20 page supplement is an anthology of adventuring sites located in and around Stonehell Dungeon. They include a monster-inhabited cellar beneath a ruined tower that was home to a magic-user with a most unusual agenda; a cave system that was once the sanctuary of a loathsome cult dedicated to the King of Pests; and lastly, the very first sub-level for Stonehell Dungeon, a somewhat safe haven for the PCs to rest – provided they don’t upset the ancient mistress of the place.

Stonehell Dungeon Supplement Two: Buried Secrets is a direct result of my own group’s exploits in my home campaign. Each of the adventuring sites included in the anthology was first explored by them, often with hilarious and lethal results. Now, through the means of the Stonehell Supplement series, you too can tread where they did. Even if you’re not using Stonehell Dungeon in your own campaign, the sites can be used as stand-alone adventures suitable for most any fantasy world.

Now, a word of warning or at least full disclosure: The Stonehell Supplements are not slick, professional products, nor were they ever intended to be. They are my own cleaned up and edited notes laid out in a clear, easy-to-read format – the same one used in the main Stonehell books. And since my only budget for these is time, they suffer from a severe lack of commissioned artwork, using clip art or public domain pieces for their covers and lacking any interior illustrations at all. If it’s any consolation, I try to make the best use of that extra space by cramming in as much fun stuff as I can. Supplement Two is no exception to this. I wanted to make that perfectly clear so that nobody feels duped. Also, the format of the supplement is somewhat different from the first Stonehell book. The first two locations are detailed in a more traditional dungeon notes method rather than the modified One-Page Dungeon method used in Stonehell Dungeon. The last location, which is a sub-level of the dungeon proper, does use that abbreviated format and can be printed out and inserted inside the book for easy reference during play.

Buried Secrets is the first supplement that comes with a price tag, namely a $2.99 one. For that low price, you get the three adventuring sites (Modnar’s Cellar, The Nest of Otrogg, and The Sanctuary of Chthonia), two new spells, eight new monsters, two new magical items, and a pair of minor deities. All that for less than the cost of a bag of Tostitos chips, and it’s guaranteed to last longer, too.

If this sounds like something you’d like to add to your gaming collection, be sure to swing by here tomorrow when the official announcement is posted and the storefront link provided.
Posted by Michael Curtis at 9:01 AM

Great! Can't wait. I was curious once all the pdf supplements are out will you be considering putting them together as one bound book throuhg lulu?

I was curious once all the pdf supplements are out will you be considering putting them together as one bound book throuhg lulu?

I admit that I hadn't even considered it simply since I don't know if and when the PDF supplements will reach an end. Although anything is possible, it's not planned for any time soon.

Awesome news! Consider one copy SOLD! I second the interest in a printed book -- even after, say, the first four or five supplements are done...

Well I will be among the first (virtually) queuing up for it tomorrow.

I re-read Stonehell the other night (as I'm looking to drop in your Silent Halls quad into my own sandbox) and was reminded just why I consider it one of the best products to come out of the OSR to date.

I third the call for a collected printed volume!

Do you have any sense of approx. when in 2011 Volume Two of Stonehell will be coming out? Eagerly awaiting it!

Do you have any sense of approx. when in 2011 Volume Two of Stonehell will be coming out?

The short and honest answer is "No." I'm going to avoid even trying to guess after my best efforts and intentions to produce the sequel "by the end of 2010" failed. It will be out when I finish it (and of course am pleased with it). That's the best I can promise.

No problem, take your time of course . . . it's just that Stonehell Vol. 1 is so damn good, and my players are enjoying it so much, that I got over-excited about the possibility of that original "late 2010" projected release date. That said, your new book project sounds enticing as well. Keep up the great work!