In the same vein as homemade gelatinous cubes, here’s another do-it-yourself job that I intended for use in my sword & sorcery megadungeon, but never got the opportunity to (hehe)unleash it.

In the same aisle that I found the pre-cut 2” cubes that formed the base of my gelatinous cube, I also discovered a bin full of wooden doll heads. Although mostly spherical, they were flattened at their bottoms to better allow them to be affixed to a doll’s body. I, however, saw this feature to mean they wouldn’t roll away if I put one down on a battle mat. That got me thinking about what spherical monsters I could use these to represent. Then I remembered an old issue of White Dwarf, number #7 to be precise (although #6 would have been more appropriate). In that issue’s “Fiend Factory” was this: 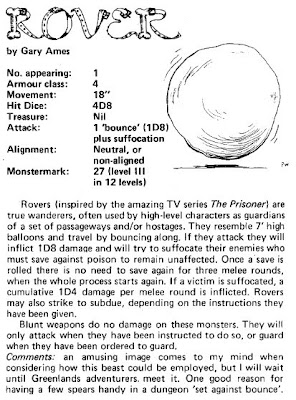 A base of primer, a going over with a coat of white paint, and a layer of glossy sealant later, I had this: 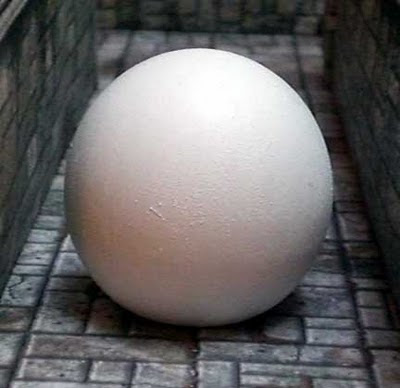 It was a little more difficult than that, mind you. I had problems with the thing getting away from me during painting, as I had it sitting atop a pencil that was supported in a hollow candlestick. It picked up a little grit in its adventures across the concrete floor, which is why you can see a bit of schmutz on its surface. Had I to do it again (and I did buy two doll heads just in case), I’d probably find a way to clamp this down better during painting. 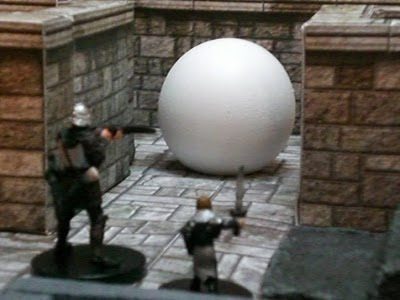 Drollo and Eryl knew not what they faced, but they suspected it meant them ill.

I could also see this represent an amorphous blob, could even attach a few psuedopods

Now you've given me some ideas...