With the weather getting cooler and night falling sooner, it’s time to start planning for projects to take me through the long winter’s dormancy. Longtime readers know that I started painting my own miniatures and scratch-building terrain last year. And, like most folks who undertake such projects, I’ve found that it is far easier to acquire new miniatures than it is to paint the ones you already possess. As such, my workbench has accumulated quite a few figures in various states of completion, some of which have been that way for an embarrassingly long time. My goal is to clear the slate in time for winter.

One project began so long ago that my Watchfires & Thrones game was still occurring in its original pulp sword & sorcery setting—the one I was building as I went. For that setting’s megadungeon, I had an interesting creature in mind and I wanted to do something special for when the PCs finally encountered it. This idea led me to the following creation: a cheap, do-it-yourself Gelatinous Cube (or perhaps a close cousin of such a creature). While there are Gelatinous Cube minis on the market they tend to be a bit pricey for a critter you’re not bound to use regularly on the battle mat. Plus, in making one yourself, you have options that the professional manufacturers probably never even considered.

The idea started when I was exploring my local art supply/crafts shop. Down the aisle where they keep the woodworking stuff, I came across a small bin filled with wooden blocks of various sizes, including a 2” cube. Seeing as that’s just the right size for a gelatinous cube, I bought one (paying $0.99 for it) and took it back to my workbench. 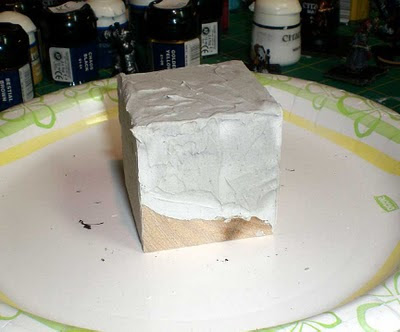 Breaking out a tub of joint compound, I slathered the cube with a generous layer of spackle, going for a goopy, “I’m frosting a birthday cake”-style thickness and texture. The key was to put just enough on so that it no longer appeared to be a square block, but not too much so that it would crack and shatter if I dropped it while moving it around the battle mat. It took a couple of days to get five sides covered, as I had to ensure the compound had dried on two or more sides so I could hold it while I did the other half. You could speed the process up by temporarily mounting the cub to a dowel with some putty. Once the cube was dry and looked appropriately uneven and viscous, I covered it with a layer of white primer (you can use your own favorite color) and got down to painting it. 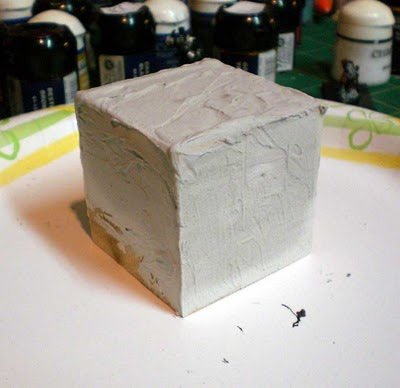 I mentioned above that the inspiration for this cube was a special monster for my sword & sorcery megadungeon. To convey its uniqueness, I went a bit offbeat when it came to painting my cube. Instead of ordinary acrylic miniature paint, I picked up a small jar of Glow-in-the-Dark paint. Not only was it an ooze-like and nauseating shade of green, but you can never tell when having a glowing cube miniature might be the perfect way to drive home to fact that this isn’t a by-the-book dungeon monster. Like with the joint compound, I really slathered the cube with the paint, allowing it to run and pool along the surface to give me a semi-liquid apperance. At first, I couldn't get a glow off of it, but the thicker the layer of paint, the better the thing looked after I shut off the lights. I’ve yet to be able to demonstrate its unique property in actual play, but I look forward to surprising my players one day. The final step was to apply a protective coating on the piece. I went with a glossy acrylic coat to give it the slick, wet shine. 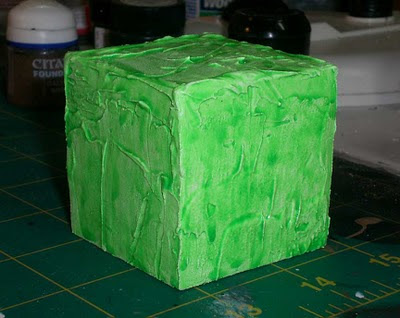 Although I’m taking some creative license with the old gelatinous cube, which is traditionally transparent, I figure once the mini hits the table the players know what they’re up against. Plus, I can always whip up a new ooze-based monster like the Slime Blockade or the Green Goop and really throw the players for a loop. This particular cube has made the jump from my original sword & sorcery campaign and will be making a most anticipated appearance on one of the as-yet undocumented levels of Stonehell Dungeon. You’ll get to know “Wheezy” a little better once the sequel is finished. My players might meet him even sooner than that… 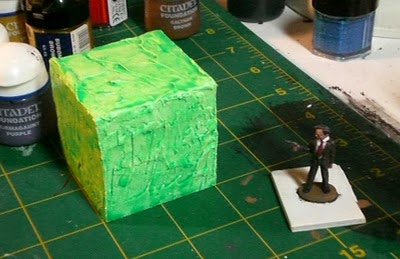 "Alright Cube, you're coming with me!"
Posted by Michael Curtis at 11:30 AM

I can't even imagine finding the time to do miniatures, on top of all the other prep work - kudos to you, sir.

Grandma used to make jell-o desserts like this, with lime gelatin and cream cheese.

We always wondered what happened to Grandma.

Paint up a skeleton figure; remove the tab or base. Make a mold out of sheet/scrap plastic. Tape it into the shape of a cube.
Fill 2/3rds with clear silicone caulk.
Insert skeleton.
Finish filling the mold.
Let dry.
Remove mold.

Dammit, not only does your mini look great, I know find myself inordinately desirious of those ghostly green merange things they stopped selling lasy week!