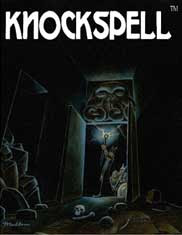 It has been a long time coming, but Mythmere Games has finally released the premier issue of Knockspell Magazine. Knockspell Magazine is the magazine of fantasy retro-clone gaming, and the content is all compatible with OSRIC, Labyrinth Lord, 0e, 1e, and Swords & Wizardry. The magazine's content includes:

Who Sucked the Fun Out of RPGing?, by Tim Kask
Death Magic & Dark Dealings, a Necromancer NPC for OSRIC by Scot "Kellri" Hoover
Three Principles of Adventuring Success by James C. "Semaj" Boney
Isles on an Emerald Sea, an adventure by Gabor Lux
Charnel Crypt of the Sightless Serpent, an adventure by Jeff Talanian --and much more--

The pdf is currently available at lulu.com for $3, HERE

Amongst that "much more" are articles from such luminaries as Allan Grohe, James Maliszewski, Mike Davidson, Akrasia, Robert Lionheart, David Bowman, Salvatore Macri, Matt Finch, and Part One of something called The Dungeon Alphabet by some hack named Mike Curtis.

I heartily congratulate the whole Knockspell crew on the release of their first issue and look forward to what they have in store for the coming year. You guys finally got that baby out the door!

The print version will be available in the near future through Lulu and a complete review of the first issue will be posted here once my contributor's copy makes its way into my hands.

Posted by Michael Curtis at 9:38 PM

you must laugh at all those rejection letters now!

"...Part One of something called The Dungeon Alphabet by some hack named Mike Curtis."

There is always at least one hack in every fan-zine! ;)

you must laugh at all those rejection letters now!

I'm sure there are more waiting for me in the future. At least I'll alway know that some of my work still hangs in a very exclusive gallery in Norway next to the Dali. :-)

There is always at least one hack in every fan-zine! ;)

True! Otherwise they wouldn't be fanzines.