Return of the Castle of the Mad Archmage 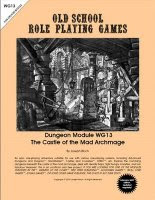 Joseph Bloch has posted the next installment of his homebrew version of Castle Greyhawk. As he did in the first, Joseph is still channeling the Dungeon Master himself in his quest to provide an “alternate history” version of that famous delve.

I’m really enjoying the fact that he’s releasing each new installment piggybacked with the previous. His notes included in the module allow the reader to watch as a spectator of his design process, letting one see what he has changed and why. As a student of megadungeon design myself, I’m always interested in how other people go about building their own creations and Joseph lets us into his head as he goes.

Fans of Greyhawk will see a few of the rumored features of the dungeon this time around, along with a familiar face or two. Keep up the good work, Joseph. I’ll be waiting patiently here until next month for the third section.
Posted by Michael Curtis at 10:59 PM