A Dungeon In Search of a Home 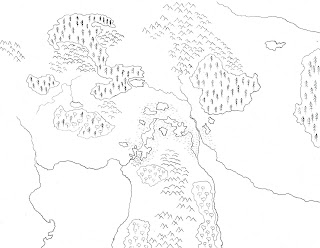 I’ve been sketching again. I’m trying to figure out where exactly Stonehell might be located on my campaign map, so I’ve taken to looking over the various potions of the main continent to see what out of the way location might be best suited for me to drop a potential Labyrinth Lord game into and not muck with the AD&D games I’ve run in the past.

As it stands, I’m waffling between two geographic areas that each have their own advantages and disadvantages. I can’t make up my mind if I want to develop an area that would be more akin to northwestern Canada or Scandinavia in climate and geography, thus being more of a traditional pseudo-European setting, or if I want to indulge in a drier climate someplace to the south, which would a mixed southwestern U.S. region crossed with the Middle East. Such a setting always put me in the mind of Howard’s Conan tales and spaghetti westerns, which always prove to be rich veins to mine for inspiration.

I’ve gone as far as sketching out a rough draft of the northern, colder region to get a vague idea of what might lie outside of the dungeon. I’m picturing vast pine forests, rugged mountain peaks, mosquito-infested bogs during high summer, and ports choked with ice in the winter. The primary livelihood in such an area would be mining and fur-trapping, with trade limited to the warmer seasons and exchanges with the indigenous barbarian tribes. This region would be located directly to the west of the map I’ve posted here in the past.

The southern region would be a richer area, both in trade and history. A drier climate always hints to me of quasi-Egyptian fallen civilizations and a climate prone to the preservation of ancient texts and codices written by authors of questionable sanity. A place where lost cities and ancient ruins await to be revealed by the shifting of the desert sands.

Both areas have their own attractions and difficulties, but are similar in that they are on the fringes of the settled lands and invite more exploration. Such locations cry out for order to be carved out in the wilderness.

Quite frankly, I’m stumped at the moment. More pondering is in order. 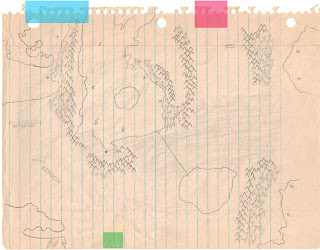 Just to give you an idea as to what I’m looking at, the above is a scan of one of my oldest rough sketches of the main continent of R’Nis. The light blue section would be the colder, northern region I’m considering, while the light green area would be the more arid area. And just for the sake of completion, the red area on the map is where I’ve placed Gloomrisk and its outlying areas.
Posted by Michael Curtis at 9:01 AM

The group I have been running through stone hell traveled there by boat, and has been signing in and out of a tavern not far from the entrance, like hikers in the adirondacks do at trail heads. The tavern is really nothing more then a hall with a keeper at the moment allowing the players some where to rest, and try to trade some wares with other travellers. My group brought with them on the second boat trip back a large supply of dried meats, and casks of ale to trade with, and keep the place stocked for a prolonged adventure in the dungeon.
Wazoo
p.s. having trouble signing in.

I love the idea of Stonehell being run by the local park's department!

"Sorry, ma'am. We've got record of your husband entering the location on last Flamesday, but nobody's heard from him since. You'll have to pay us another 5 silver marks if you want to extend his permit."

Well, putting the dungeon somewhere other than a mountain would be at least different than the current ones out there on the blogs.

In my current campaign, the party is heading to a dungeon (that has been visited before in games) that lies beneath an aging barbarians tavern in the hobbit lands(!). Back in the day he was part of a group of adventurers' that regularly made trips into it, and when he settled down with a family he just built his inn right above the first level entrance (his back basement rooms serve as the 1st level). There is a cave entrance to the 4th level in a nearby abandoned quarry that he keeps fenced off and charges a modest rate to enter it. If adventurer's want to stay, he charges 25 gp each for private rooms and special attention (not from his hot young daughter though). Of course, he was a special arrangement with the "powers that be" who maintain the dungeon...

Stonehell must be located in the rough scrubland at the edge of a desert, the foothills of some rust covered mountains that have been worn down by the howling winds. It's history reeks of being in the Lost Lands, the place where the inhabitants have long since vanished into the land of almost-myth. Obviously Stonehell itself hints that they were up to no good, perhaps they ventured where Man Should Not Tread? They fell to corruption and vice and were wiped out by a more forthright civilization who salted the earth so that nothing would grow again? The weather shifted and the land dried, rumored to be the hand of a wrathful god, and the Subtle Experiment was abandoned as getting to it from the capital was too much of an expense for an intellectual dalliance. I like the last one best as it hints that beyond the dune seas the builders are still there, perhaps feeding on strange trade routes with the Empire of Salt and Brass that always lives just off the map. They have found new gods to support them. Gods that hunger for flesh and tears and the Builders are more than happy to supply them.

Started a group through Stonehell on Friday, running first ed. Dragon Warriors (sorry you D&Ders, but with the release of DW 2.0, had to dust off the old ones). Anyway, they only had time to explore the deserted dining and kitchen rooms that night.

To answer your question, I've got the dungeon in a dry, dusty land far across the seas, devoid of people but full of ruins and dungeons from a long vanished race. The only cities are both recent and only exist to support services, welcome new treasure seekers and house the king's tax service. Dry, dusty and very similar to Mr Scratch's ideas - scary..

I think that I've settled on a personal solution, but in doing so I've come to another conclusion.

I had dimly planned in my mind to write-up the above ground section of Stonehell and make it available for use with the subterranean part of the dungeon. I've since scrapped that idea. From what I've been reading, people have been doing their own thing with the dungeon and where it's located. To detail anything other than the dungeon itself would create canon that would detract from the overall usefulness of Stonehell. So I'm going to purposefully leave it vague. Stonehell is everywhere and anywhere. It'll be up to the referee and the players to determine their own particular where and even when it is located.