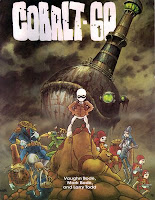 About a month ago, I mentioned here that one of my resolutions for this coming gaming year would be to put together a Gamma World sandbox style game. I haven’t mentioned it since, largely because not much progress has yet been achieved in that endeavor. I’ve got some work done on a draft of the campaign world map, but most of my efforts have been in the mental arena, rather than in a physical one. This doesn’t indicate a lack of interest in the project. I just prefer to let things cook on the backburner awhile before I get down to business.

One of the things I have been doing to keep the project alive in my head was to go and start looking at inspirational sources to guide me through the design process. I sat down and watched Ralph Bakshi’s Wizards again, as well as picking up a copy of A Canticle for Lebowitz to re-read. Throw in a dash of everyone’s favorite post-apocalyptic gun-porn series, “Deathlands,” and I’ve got the pot pretty much spiced to taste for the moment.

But when it comes to things Gamma World, there is one source of inspiration that I’ve always drawn heavily from, but seldom see it mentioned by others. I’d like to take a moment to call some attention to this perhaps unknown resource.

Back in 1968, the underground cartoonist Vaughn Bodé introduced to the world a ten-page comic detailing the exploits of a white-clothed, post-apocalyptic warrior and guerilla fighter by the name of Cobalt 60. That eponymously-titled comic appeared in the alternative comic book witzend. Despite the fact that Vaughn would win a Hugo in 1969 based strongly on Cobalt 60, he never did anything else with the comic or character again, saying that the world of Cobalt 60 depressed him. He did do some further character conceptions and sketches, but never returned to that cinder of an Earth during his lifetime. 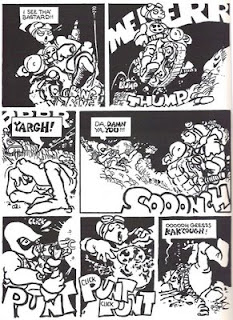 After Vaughn’s death in 1975, his son, Mark Bodé, would return to the world that his father created. In 1984, Mark and writer Larry Todd created a new storyline featuring Cobalt 60, as well as some of the characters that Vaughn had conceived during his life. That new storyline was done as a full-color comic that saw print in serialized form in the pages of Epic Illustrated. It was in that publication that I first laid on eyes on Cobalt 60 and the funky, violent post-apocalyptic wasteland that was his home. I was completely captivated.

I’m not much of an artist, but I got so caught up in Cobalt 60 that I started trying to draw my own post-apocalyptic adventures of that character. Vaughn’s original artwork was simple enough for me to try and duplicate, although recreating his talent was something else entirely. Thankfully, none of my own efforts survived to this day. Nonetheless, when it comes to primary sources of inspiration for Gamma World, Cobalt 60 is at the top of the list. 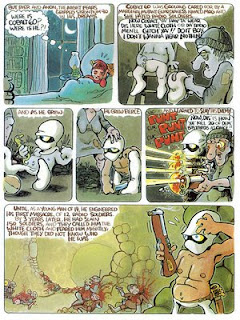 A brief synopsis of the Mark Bodé/Larry Todd storyline is that Cobalt 60, a warrior with a mysterious past, fights a guerilla war against the Radio Empire and its pipsqueak ruler, Strontium 90. Strontium had seized the throne from the Empire’s former ruler, FE 56, and now carries out a cleansing war against mutantkind, both within the empire and without. Cobalt 60, assisted by his companions Franklin Gothic Green, a mutant bird who possesses an array of sentient swords, and General Hisstory, a mutant crocodile who leads an army of constantly hungry reptile soldiers, seeks to overthrow Strontium 90 and end the Radio Empire’s threat to all mutants. Along the way, Cobalt 60 runs into a band of no-legged, floating alien scavengers, who are in the employ of a wormlike alien who possesses a “doom marble” and seeks to salvage fissionable material from Earth’s wasteland. A few double-crosses, a coup d’état, and a three-sided battle later, Cobalt 60’s secret is revealed. 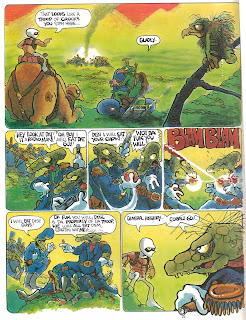 From that synopsis, you can see why Cobalt 60 remains one of my primary sources of inspiration when it comes to Gamma World. Mutant animals, mutant genocide, and wasteland warriors are all present and accounted for. The aliens are maybe not so much a Gamma World staple, but I already have some suspicions that my Gamma World sandbox may end up a little closer to “sword & planet” than straight post-apocalyptic. That seems to be too rich a genre to mine to leave untapped.

Cobalt 60 is also one of those titles that actually become a richer source of inspiration as it ages, simply because it grows outdated in some ways. The whole concept of a “Radio Empire,” which was originally established in Vaughn’s piece from the 1960s, is already a bit dated in 1984 – although there are references to the “Hadatchi Throne” and the heiress to the throne is named “BBC”, which does place it a bit more in the TV Age – but works pretty well as a symbol for mankind attempting to rebuild from the ashes using primitive, yet complex, technologies. It’s easier to picture a “Radio Empire” in Gamma World than a “Fiber-optic Kingdom” or “Cellular Satrapy” in my head solely for this reason. I’m sure to get a few creative miles out of it.

There is one puzzling thing about Cobalt 60 that I need to touch upon before heading back to the fallout shelter for further contemplation. The Cobalt 60 collection that I own ends with the words “End of the First Half,” indicating that a second part of the story remained to be told. As far as I can be certain, this is also where it ended in the Epic Illustrated serialization. However, for some reason I have extremely faint, faint memories of the story continuing after the events depicted in this “first half”. I’m not certain if there ever was a second part published in Epic Illustrated, which would have been the only place I would have encountered it in my youth, or if these memories resulted from my own attempts to draw a Cobalt 60 tale of my own. A look at Wikipedia tells me that the Epic Illustrated series were gathered into four magazine-sized comics published by Tundra Press in 1992, but I’ve never seen these so I’m uncertain if these four issues contain the second half as well as the first. It seems that Heavy Metal published a few more Cobalt 60 stories in the 1990s, but I know I didn’t see them in that publication. If anyone can confirm the existence of a second half to the Epic Illustrated serialization, you’d help me lay this nagging question to rest.

According to Wikipedia, there were additional Cobalt-60 stories in Heavy Metal during the 1990s. I don't remember the strip, but it sounds *really* cool.

I'd love to get my hands on these...They sound very inspiring.

On another note, I don't think I've ever heard anyone speak about 'A Canticle for Leibowitz', which coincidentally is one of my all time favorite books.

Are you going to be using the original Gamma World rules or Mutant Future (i.e. some modern day analog)?

According to Wikipedia, there were additional Cobalt-60 stories in Heavy Metal during the 1990s.

I saw that mentioned when I was doing some research for this post. But my hazy (if not completely fabricated) memory tells me I saw further tales during the 1980s. I wouldn't have read them in Heavy Metal during the 90s. Thanks for pointing it out though. This might just have to remain another eternal mystery for me.

On another note, I don't think I've ever heard anyone speak about 'A Canticle for Leibowitz', which coincidentally is one of my all time favorite books.

I haven't read it since high school, but I remember liking it enough to give it a re-read. There's a dearth of post-apocalyptic fiction compared to straight fantasy, so I'm trying to take as much inspiration from sources that would have been available prior to 1978, the year Gamma World 1st edition was published.


Are you going to be using the original Gamma World rules or Mutant Future (i.e. some modern day analog)?

The goal of the Gamma World snadbox project is to do with GW what a lot of folks have been doing with OD&D, by which I mean going all the way back to the start and "imagining the hell out of it" rather than relying on later published supplements and editions. So I'm going to start with just the 1st edition GW book & Metamophasis Alpha and build up from there.

I love Mutant Furture, but since it's already someone else's take on Gamma World, it's one-removed from the original material as it, so it doesn't suit my intended scope of the project. That could, of course, change as things progress, but for now I'm sticking with pure Gamma World.

Bode...Cheech Wizard, right? Oh man, that takes me back.

As a fan of Bakshi's Wizards since childhood, I have always thought it would be a great Gamma World setting. Maybe a bit too far in the future though - I think it was a million years since WW3? Not much in the way of artifacts would last that long (especially old Nazi propaganda footage).

I LOVED Cobalt-60! I can confirm that Epic Illustrated never published a second half to the story. I collected it regualarly and was devestated when it was cancelled. No more Madra the She-Wolf. They didn't finish The Last Galactus Story.

Mark is currently working on the second half of the Cobalt 60 saga for Dark Horse comics. Mark has sold his comic adaptation of Cobalt 60 to Universal Studios for a live action movie that starts production in 2009 by Director Zack Snyder of the movies Frank Millers "300" and "Watchmen".

Try this. Search for:

To bring up the article.

This is the only Heavy Metal reference I've seen:

I've been on a bit of a Gamma World inspiration binge myself. I highly recommend Sterling Lanier's Hiero books.

I've heard about the movie, but it seems like it one of those projects that's been stuck in development hell in Hollywood for almost a decade. Maybe one of these days it'll get a greenlight.

I've been on a bit of a Gamma World inspiration binge myself. I highly recommend Sterling Lanier's Hiero books.

Oddly enough, as part of my resolution to read six books off of Appendix N from the DMG, I just ordered a used copy of the first Hiero novel and am currently waiting for it to arrive in the mail. I've also picked up Margaret St. Clair's Sign of the Labrys which seems like it may have some GW application as well as D&D inspiration.

You know, just looking at the pictures and reading your plot description- I had no idea that Wizards (and the character necron99) was a rip off/tribute to Cobalt60. Now that I think about it ElfQuest + Cobalt60 = Wizards. I will definately check it out one of these days.