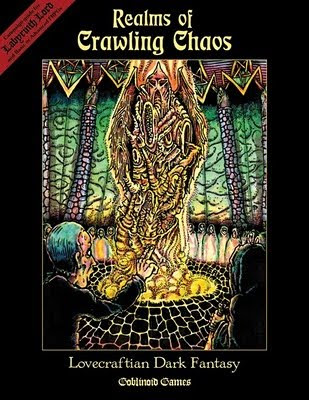 At long last I can break my silence since Dan Proctor has officially announced it.

Without saying too much about the supplement just to be safe, this is an incredibly cool book and I’m honored that I was asked to be a part of it. My response on seeing Dan’s manuscript was, “It’s like you took the Cthulhu Mythos chapter from the unexpurgated Deities & Demigods and turned it into a sourcebook of its very own!” Dan did an amazing job on this one and I think a lot of folks are going to impressed by the stuff in there. You’ll find it awful stuff, by which I mean you be both “full of awe” and hopefully disgusted too. I know I blew out the “weird gear” in my mental transmission doing my section of the book and I hope the pain and madness comes through in the text.

Pick this one up when it hits the market. The psionic system is worth the price of admission alone. Your players will hate you for it.
Posted by Michael Curtis at 9:31 PM

Man, there's some cool stuff coming out this year! This news in particular, is most awesome!

I'm having a hard time containing the joy - our very own Lovecraftian sourcebook for Moldva... er, Labyrinth Lord. Sounds like a real labor of love all around.

This could scratch a lot of itches. I'm glad to see your by-line on this, a few of your last posts made it sound like you were folding up your fantasy rpg tent.

Nice. I am so purchasing this.

Drat, something else I have to get!

Great news! I need more Cthulhu and psionics in my game!

I'm glad to see your by-line on this, a few of your last posts made it sound like you were folding up your fantasy rpg tent.

I wouldn't say that I'm folding up my tent, but I am looking for a new place to pitch it. I've still got some fantasy-based projects coming down the line, but I do sense a holiday from sword & sorcery is due. I've been deep in Frodoland for more than two years and I need to shuffle things around to keep me fresh. I'll be back in fantasy land before too long though.

This looks great -- I can hardly wait to read it!

Frightening! If there's one thing I love to do, and my players hate, it's add more Lovecraftian essence to my campaign. I will be purchasing this when it's available or may the Deep Ones take me!
ChrisL/Anachronistes