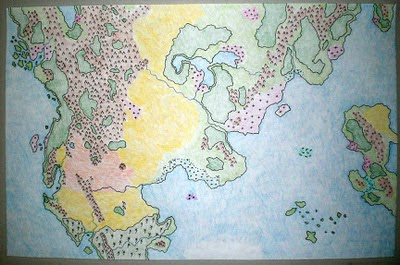 The mental auditions to choose what game I intend to run after Watchfires & Thrones runs its course continue. It was my original intent to run Gamma World, but, although that continues to be the front-runner, a few dark horses have entered the race. Whether these go the distance or are mere phantoms conjured by Gamer A.D.D. remains to be seen.

Assuming I continue with the Gamma World plan, I intend to run it as a wide-open sandbox. My re-acquaintance with the rules has shown me not only how suitable Gamma World is for this type of campaign, but it actually seems to be the default setting for the game—something that escaped me in my youth. With more wisdom and greater experience in this type of campaign, I foresee a heck of a lot of fun in exploring a post-apocalyptic sandbox.

I’ve started doing the initial planning for a Gamma World sandbox by following Rob Conley’s incredibly useful step-by-step process. Although certain other projects got in the way of progress, I have completed the first step: the initial conceptualization of the larger world in which my sandbox will be located. Although a simple one-page sketch map is suggested, I’m more of a poster paper/colored pencils man. After all, why settle for sketching when you can create art!

I didn’t worry too much about pinning down scale at this point and size. This map is more in preparation for the day the characters find a bubble car and start zooming around the lower atmosphere (intentionally or not) and set down in some unknown region of the world, henceforth known as “Roont Urt” rather than the more prosaic “Gamma Terra.” If things look a little askew, that’s completely intentional…and part of the fun of exploring the campaign world. The initial sandbox would likely be set in the orange region in the lower left-hand portion of the map, right around where that mountain chain ends in a “Y”.

Next step: Naming regions.
Posted by Michael Curtis at 4:08 PM

What? I miss something?

Will you be providing after-action-reports from the sessions?

Phew...I thought I might have subconsciously lifted something from Urutsk or somewhere for a there. Wouldn't be the first time I discovered an "original" idea came from someplace much cooler.

And yes, "Ruined Earth" is *one* possible origin of the name...

As for post-game reports, it's a little too far ahead for me to determine, but I wouldn't rule out a campaign-dedicated blog like I did with the Labyrinth Lord campaign. But we'll wade across that glowing river of sludge when we reach it.

Not that I can see.

My Mutant Scavengers of the Ruined Earth! title ties in with a fiction-setting of mine I wrote a piece for Michael Moorcock, but I don't see enough of a connection yet to grow concerned.

I'm interested in P-A gaming in general, especially if it is unique.
--I'm eager to see what you've got planned. :D

In all honesty (and some remorse), I didn't even know such a thing as MSotRE! existed until just now. No intellectual hijackery was involved. But now I'll have to check it out!

I'd be honoured if you would use the rules. :D ;D

In all seriousness, let me know what you think of it.
--In the meanwhile, I'm looking forward to your game info.