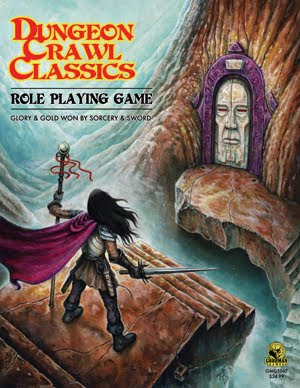 Today is Dungeon Crawl Classics Day over at the Goodman Games website.

You’re a reaver, a cutpurse, a heathen-slayer, a tight-lipped warlock guarding long-dead secrets. You seek gold and glory, winning it with sword and spell, caked in the blood and filth of the weak, the dark, the demons, and the vanquished. There are treasures to be won deep underneath, and you shall have them.

Return to the glory days of fantasy with the Dungeon Crawl Classics Role Playing Game. Adventure as 1974 intended you to, with modern rules grounded in the origins of sword & sorcery. Fast play, cryptic secrets, and a mysterious past await you: turn the page…

Designers’ Diary: Learn more about the RPG design in our regular entries.

Community: Discuss the DCC RPG on our forums!

Open Playtest: The core rules for the DCC RPG will be released in a free, open playtest in mid-2011. Watch this page for more details.

Support: Goodman Games will support the DCC RPG with an extensive line of adventure modules and select other materials going into 2012. More details coming soon!

Licensees: Select publishers will be offered licenses to publish supplemental material for the DCC RPG. If you are a publisher interested in learning more, please contact us.

Thanks for the heads up. I definitely be picking this one up and looking through it.

I got to play in that at GaryCon last year...it was fun but very rushed so I'm not sure I will commit to it until I can actually thumb through it.

It does sound really interesting, but I'll have to see more before I decide to buy it or not.

The artists include Peter Mullen, Erol Otus, and Jim Roslof? I'll get a copy just for that.