I am a Meta-Gaming Referee 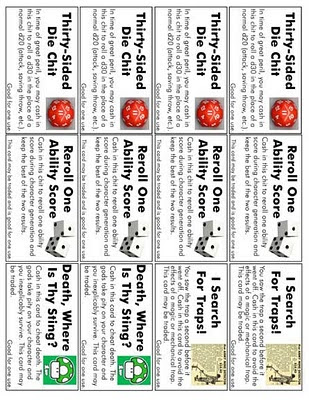 When WotC announced that they’re introducing the new Fortune Card marketing gimmick, some folks took it to be the final nail in the coffin of a game they once loved. Others saw it as the long-delayed inevitable step and wondered why it took this long to happen. I read about it on the blogs, shrugged my shoulders and went back to what I was working one.

I did this for two reasons. The first is because, other than the re-issue of Gamma World, nothing WotC does anymore affects my game playing or purchasing habits. As such, I’m no longer involved in any customer-publisher relationship with them, and outside of making the older editions available in PDF format again, I’ve no opinion on what Hasbro and the Wizards do with their products, money, and time. I do wish they displayed greater employer loyalty to their designers though.

The second reason was that I beat them to the punch by almost a year.

I’ve made note that I will sometimes award players with a certificate of commendation for reaching certain milestones or displaying exceptional growth in play. What I didn’t mention is that these award letters are accompanied by a chit or card good for use in game. All of these cards affect the mechanics of the game in some manner and they do so in a meta-gaming manner. It is the player who steps in the apply these award cards, much like using a “Get Out of Jail Free” card to avoid an unfortunate dice roll in Monopoly.

I make no apologies for this behavior. I find them enjoyable and the players love having this additional resource at their disposal when things start going incredibly wrong for them. Such an obvious “gamist” element might not meet with everyone’s approval, but if you are the kind of referee who likes giving the players another factor to consider when deciding their actions, you can download a PDF copy of the chits I use in my Labyrinth Lord campaign here.
Posted by Michael Curtis at 4:54 PM

It strikes me that there's a lot of room for "campaign specific customization" with a system like this, with giving cards names like "Crom..Count The Death!" or "Pettifoggery!"

I think most people's issue with the cards is that players can buy more and therefore get a better character, rather than with cards as such.

There's nothing wrong with a card-based metagame mechanic. Heck, it's really not that much different than Action/Drama/Fate/Hero/Whatever-you-want-to-call-them points.

What irritated a lot of people was the CCG element of it, I think.

I did something similar for Christmas. The players are enjoying it. http://madarchmage.blogspot.com/2010/12/santa-krampus-and-your-humble-dm-wish.html