A couple weeks back, I wrote about the idea that I had had about creating a list of famous families and then having human characters roll on that table during character generation to see which bloodline they’re part of. I’m skimming Herodotus’ The Histories again for something I’m writing, so it seemed like a good time to put that plan into action while the inspiration for the idea was in front of me. I started sketching out ideas and very quickly compiled a list of ten families. I figure that’s a good number to start with and I can always add to it later. The table is a bit too big to reproduce here on the blog so I’ve settled on a screen grab of the first page. You can click the image for a larger version. If that’s still not enough for you, you can check out the complete .pdf here. 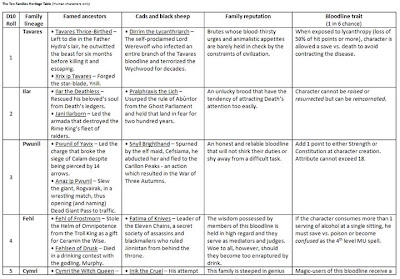 The table’s pretty self-explanatory. The only thing that might need clarification is the “Bloodline trait” column, which is rolled for after the character’s family has been determined. On a 1 in 6, the character has especially strong family blood and possesses the trait - either positive or negative - which is commonly associated with that bloodline. Originally, I had the chance at a 1 in 4 but I’m currently of the mind that that may be too much. I want to add a little randomness to the process but not have it become a tremendously common occurrence.

In sticking with my ethos of the illusion of depth, I’ve got very little clue as to what most of the events mentioned in the table actually are, nor am I worried about it. If a player sees something that catches his interest though, I’d be eager to sit down and think more on the subject, perhaps if only to produce a few threads for the character to follow.

It’s a germ of an idea and I like it in concept. I’ll need to take it out for a test run before I decide if this is something that will be a boon or a bane to the shared world experience, however.

Great stuff. Very inspirational. I may outright steal the format.

Agree, good and fun stuff. Ever since your original post I've been thinking about working in some Great Houses into my campaign, inspirational to see how you have put it together.

Question though, are you imagining that most denizens of the land are descendants from these bloodlines or just adventurers (and other misfits)?

Reminiscent of the Famous Ancestor character backgrounds from L5R, which is only to the good.

Your great-grandfather invented the owlbear?! Why I oughta!

I love the 'depth illusion', because it's being able to use these events from the past that help make things, well, seem deep...

The L5R ancestors were always a little constraining, I felt, but then again, the whole game was, despite having the second most awesome combat system for RPGs.

One Q, though; is -2 dealing with animals good or bad? (don't play any type of D&D, sorry)

Very inspirational. I may outright steal the format.

The format seemed to be the easiest way to compile all the various aspects I wanted to include. Take it and run!

Question though, are you imagining that most denizens of the land are descendants from these bloodlines or just adventurers (and other misfits)?

My thought is that all of humanity has some connection to the various bloodlines. Some just have a more vested interest in these families than others. I'm sure that there are other bloodline traits and ancestors of fame and infamy not mentioned on the table, but since this is primarily for adventuring characters, I decided to concentrate on the most game-applicable parts of family descent.

Reminiscent of the Famous Ancestor character backgrounds from L5R, which is only to the good.

If there is, it's purely accidental. I've never so much as look directly at a copy of the Legend of Five Rings. But it seems like the deisgners of that and myself where gunning for the same thing.

Your great-grandfather invented the owlbear?! Why I oughta!

It's about time somebody took the fall for those things.

One Q, though; is -2 dealing with animals good or bad?

I put the table together under the assumption of using it with Labyrinth Lord, so the -2 modifier is a bonus to the reaction roll, meaning the animal is less likely to attack. Folks running Moldvay Basic would use a +2 modifier for the same result.

Inspirational indeed! Running a class based system I love to have small oddities to make characters special. I usually carve the personality of my PC's in play so things like this is very helpful for me. Cool!