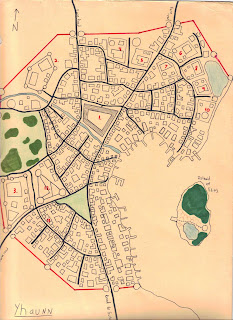 I didn’t like the World of Greyhawk when I was a boy. That’s a heretical admission for one who associates himself with the Barony of Eld, but a truthful one, nonetheless. My exposure to the World of Greyhawk, outside of the background notes for various modules, was the 7th printing of the campaign world boxed set. Prior to that time, I had been using my own homebrewed campaign world - one inspired by the Known World map from the Isle of Dread.

The reason that I disliked the World of Greyhawk was ironically its main selling point for many gamers, which was the lack of detail provided. Oerth was a canvas painted with broad strokes that left a lot of room for DMs looking to pencil in their own details. But to my twelve-year old mind this wasn’t a benefit. I instead saw it as a rip-off. If I was going to spend my hard-earned lawn mowing money (and my not-so-hard-earned birthday cash) on a TSR product, I’d better be getting my money’s worth. At the time, I certainly didn’t think that this was the case with Greyhawk. There wasn’t even a complete adventure included, just some ideas for some which I’d have to make up on my own – something I had been doing all along. I would admit to the map being fantastic, but that was slim condolence for a boy who had been expecting much more bang for his buck.

In 1987, the release of the Forgotten Realms boxed set changed my mind about the feasibility of using a published campaign world. A couple of different factors were responsible for my new opinion. The first was I was a few years older and wiser, and I could appreciate the appeal of blank space on a campaign map, so to speak. The second was that I felt that the format of the Forgotten Realms boxed set was superior to that of World of Greyhawk. I was (and remain) the type of person who gets great joy out of reading encyclopedias. The mental adventure of reading alphabetical entries without knowing where they may lead to next is something that entertains me. The “Cyclopedia of the Realms,” which was included in the boxed set, pushed all the correct buttons of my psyche. The last factor, while an apparently minor one at first glance but very important to me when I first read it, was The Promise.

The Promise, as I refer to it, appears on p. 6 of the “DM’s Sourcebook of the Realms.” Consisting of a mere two paragraphs, to my eyes it was nevertheless the most important piece of text in the entire set. In brief summary, The Promise states that several locations in the Forgotten Realms will never see “future adventures, modules, or sourcebooks” for them. The “will not” was even italicized to demonstrate how serious they took this statement.

I can only properly explain why these two paragraphs were so important to me by revealing an embarrassing secret: I was a TSR fan boy. Shameful, yes, but I was much younger then and didn’t realize that not everything coming out of Lake Geneva, WI was written on stone tablets handed down from on high. So blind was my devotion that even the Dungeoneer’s and Wilderness Survival Guides were treated as holy tomes. As far as I was concerned, anything and everything with a TSR logo on it was canon and had to be treated that way.

The Promise was, although the term wasn’t in my lexicon at the time, a social contract between me and TSR that effectively said “do what thy will.” The scales fell from my eyes and I embraced this idea with a fervor that exceeded my previous devotion to the company. It suddenly became clear to me that, outside of my purchase of their product, I had no further connection or obligation to TSR and was free to pick and choose and bend and break anything in the Forgotten Realms that I wanted to. And that’s precisely what I began to do.

Taking the suggestion of the boxed set, I wrote my own version of the town of Ashabenford in Mistledale. Although it was inspired by the entry for Shadowdale, Ashabenford was mostly my own thoughts put on paper and I was rather proud of it. Gathering a group of my friends together, we set about exploring the brand new (to us) setting of Faerun, as seen through my fifteen-year old eyes.

Almost every adventure we had in the Forgotten Realms was self-created. I pulled color, NPCs, and locales from the boxed set to give it a veneer of Faerun but that was it. Even as the first Forgotten Realms source books began to appear on the market, which I purchased to mine for ideas rather than use whole cloth, our weekend meets in the Forgotten Realms took place is one that was uniquely our own. We explored Myth Drannor long before the canonical version appeared, strode the streets of Waterdeep in the time before City System and which only owed slight acknowledgement to FR1 – Waterdeep and the North, opposed the plots of the Zhentarim and the Red Wizards of Thay (who more closely resembled the Cosa Nostra and the sorcerers of Stygia than as they’d ultimately be presented), and generally made ourselves at home in Ed Greenwood’s home, although with much redecorating to the premises. I can also say that a certain arch mage never even poked his beak-like nose into our goings-on.

Between the years of 1987-1989, which fortunately was the time in which my Realms campaign was most active, Faerun was little different from the published campaign worlds that had proceeded it. A bit more detailed, perhaps, than Greyhawk or the Wilderlands, but still a world that was wide-open to exploration and homebrewed creations. It was a world that was perfectly suited for someone such as me – a person looking for enough detail to help guide them into a more serious and realistic game experience. Despite how reviled the Realms has become to certain schools of thought, if one looks back on the original grey-green boxed set, many of the arguments against the Realms hold very little water.

But time stands still for no man, especially when there’s money to be made, and in 1988 and 1989, two events would occur that irrevocably changed the Forgotten Realms forever.
Posted by Michael Curtis at 9:01 AM

My experiences with the FR was similar, though not quite the same. I don't quite remember my first exposure, but I think it was the article on Seven Magic Swords from The Dragon. All of those articles, the Pages from the Mages, et.al., were awesome. They made the Realms feel alive without actually telling you that much about them. It was the Tolkien trick of using myths and legends to give the feel of background.

I was pretty excited, then, when I got the FR Boxed Set. But that already felt a bit too much to me. I think it was the inclusion of all of those PC's. Why the Hell did I care about someone else's high-level PC's? But, still, there was a lot of nifty stuff; I still really like the Red Wizards of Thay although I don't have the faintest notion of what the official version is or was. And I dug that list of the Years---Year of the Arch, Year of the Wyrm, etc.

What I'm hoping to get out of this revisit to the lands of my youth is a clearer understanding of what went wrong and why my emotions about a mythical place that once took up so many hours of my life are so mixed. Most times, I'm keeping this blog with the audience in mind, but other times, I'm doing it solely for my own edification. This is one of those times.

I actually had to go back and look at my copy of the boxed set to remind myself of what you meant by the high-level PCs. Looking back on those pages, I could see why their inclusion might not be some people's liking. In my own campaign, I don't recall using any of them other than to guage what my of NPCs of a roughly equal power level might have in magical items or influence, but I see what you're saying.

I'm still kind of fuzzy on the Red Wizards of Thay myself, canonicaly speaking.

Matthew, the inclusion of other characters was to give examples of the range and style of characters that "fit" in the Realms, based on Ed's home game.

The inclusion of those guys (like that ranger and his wife, I forgot their names), was the beginning of the Mary-Suing of the Realms. It wasn't long before everything got Elminsterizered.

When I first started DMing/playing in '81 it was mostly Greyhawk because of the old modules -- that was the setting in the mods, so we used it. By the time 1986 rolled around I felt really comfortable "going it alone" in terms of stealing/hacking/writing my own adventures and campaign stuff, and it was only a year later when the FR boxed set came out. I remembered the setting and bits-and-bobs from issues of Dragon and thought, "Why not give it a try?" I did, and loved it. Never much cared for most of the setting supplements except Savage Frontier, so a lot of "my" Realms wound up being run on the fly with a lot of tables and charts and random NPCs and stuff -- which typified the old-school way I like DMing. So, I never thought much about the Realms NOT being old-school. Well, at least until 2nd ed when everything but the kitchen sink came out for the Realms, but by then I had switched to a completely homegrown setting. Anyway, long rambling post basically saying "I look forward to more of your insights, Mike, 'cause they're making me think of the Realms again fondly!" :-)

Anyway, long rambling post basically saying "I look forward to more of your insights, Mike, 'cause they're making me think of the Realms again fondly!"

This has been my own experience in putting this week's posts together. I've had the change to delve back into a place that I have not visited in many, many years, and I'm rediscovering what drew me here in the first place. It's also allowing me to put a few old ghosts to rest. I'm glad your getting the same result from this trip down memory lane.

Sorry, but there aren't "all those PCs" in my copy of the original Realms boxed set. Those are almost all NPCs.
I remember hearing Greenwood answer questions at a GenCon seminar years later, and when he was answering, the highest level characters in the Knights of Myth Drannor had just made it to NINTH level.
As for MarySuing and Elminsterization: I think most of the former is based on gamer attitudes, and most of the latter on what TSR and WotC asked Greenwood to write about. A favorite refrain of his is that he DIDN'T want to feature Elminster in novels or Realms adventures, but did so when he was told someone else would just write them instead. So blame the publisher for the super-hero aspects of the Realms (which were paramount in almost all published game worlds in the 1990s, if you step back and take a calm look at them)