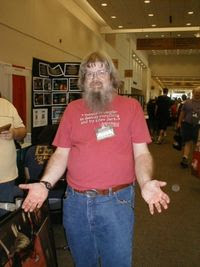 As we prepare to leave the Realms behind us for good, it’s fitting that we take a look at the man from whose brow the world sprang. Ed Greenwood, a humble library clerk from Ontario, has achieved what many gamers dream of: to take their homebrewed world to places outside their game room and into the world at large. And although this will undoubtedly Ed’s greatest legacy, it certainly isn’t his only contribution to the hobby as a whole.
Like many aspiring game designers, Ed got his start in the pages of Dragon magazine. Issue #30 featured a new monster, “Curst,” designed by Greenwood and appearing in the magazine’s “Dragon's Bestiary” column. Ed has admitted that his sole purpose in sending the monster to Dragon was his hope that, by getting it published by the TSR periodical, it would gain a measure of legitimacy and stop his players from complaining that he was “cheating” by not using monsters from the game books. Two issues later, another of Ed’s creations (one that would become a Forgotten Realms icon), the crawling claw, appeared.
Had Ed continued to limit his contributions to the “Dragon's Bestiary,” we might not know his name today. Although many of these monsters are, at the minimum, workmanlike creations, when was the last time you encountered a “wingless wonder” during a game session? Luckily for all concerned, Ed would prove he had the talent to do more than churn out a monster of the month.
He contributed an article on Divine Right, the new TSR board/war game, entitled “For Your Minarian Merriment” (issue #34) and followed that up with an article on magical gates in D&D (“From the City of Brass to Dead Orc Pass”) in issue #37. He continued to submit new magical items for the regular feature, “Bazaar of the Bizarre,” and some of the names associated with these pieces of magic would become very familiar years later when their creators appeared in the Forgotten Realms boxed set and source books.
Ed’s steady contributions of solid design pieces landed him a spot on the Dragon masthead starting with issue #45 (listed with Roger E. Moore as Contributing Editor). It would be soon after this that the first tendrils of the Forgotten Realms began to work their way through Ed’s articles. “The Merry Month of…Mirtul?” saw print in issue #47 and mentioned Ed’s unnamed campaign world, but it wouldn’t be until “Down-to-earth Divinity” (issue #54) that the public would see the words “Forgotten Realms” in print. These articles would be the beginning of Ed’s use of the Forgotten Realms as a framing device for Dragon articles – a device he would use to great effect for years to come.
Not everything Greenwood submitted to Dragon contained veiled references to his home campaign. Those who only known Ed in conjunction with the Realms sorely need to acquaint themselves with his landmark articles “The Nine Hells” parts 1 and 2, “Plan before you play” (a solid article on world-building from the top down, rather than from the dungeon out), and his “Up on a Soapbox” piece, “Players don’t need to know all the rules,” about introducing new players to the game. His contributions regarding gunpowder and adventuring in the 20th century (“Firearms,” “A Second Volley,” and “Modern Monsters”) are both indicative of the once-common tendency to mix technology and magic in D&D, as well as a unique take on the topic from someone whose become associated with the “high magic” world of the Realms.
“The Nine Hells: Part 1” appeared in issue #75 along with another of Ed’s articles. This other article, “The Ecology of the Mimic,” began Greenwood’s long-running stint as Dragon magazine’s monster ecologist. In later issues, Ed ran the gamut from basilisks to ixitxachitl, making logical sense out of fantastical creatures. Unfortunately, despite some entertaining fiction used to couch the monstrous information, for many gamers (myself included) the ecologies were more curse than blessing. The ecologies may not have solely contributed to the trend away from the “wild and woolly days of the dungeon,” when no explanation for funky monsters was required, but it certainly fueled the movement towards realism in fantastical worlds.
Although the Realms had been mentioned obliquely and in passing before, one article firmly cemented the associated of Greenwood’s name with the world he created. In issue # 62, the first of Greenwood’s “Pages from the Mages” articles appeared. In my opinion, “Pages” is one of the classic series from Dragon’s heyday. For the first time, magical texts and tomes became more than a lisitng on the treasure tables. Greenwood’s grimoires contained notes on their appearance and history, as well as the obscure spells and magical properties they contained. A fitting topic for someone in the library science field. “Pages” also featured the first appearance of Elminster, Ed’s fantasy alter-ego and Realm’s icon.

A few more non-Realms pieces appeared in the pages of Dragon (“The Scribe,” “The Smith,” “Curses,” “The Electrum Dragon”), but Ed’s framing device/campaign had found an audience despite the limited details that peppered his articles. Before long, all of Greenwood’s articles featured mentions of the Realms, even his ecology pieces. Outside of monster contributions, a retrospective on the Nine Hells articles, and the occasional magical item, the Realms and Greenwood became synonymous. Articles detailing aspects and objects from the Realms were now the norm and this only increased as the release date for the Forgotten Realms boxed set approached. The creation had outstripped its creator in many respects.
Greenwood remains an icon in the hobby, especially in a time when we’re losing so many of them. He stands as an inspiration for many gamers with dreams of sharing their creations with a broader audience. In no uncertain terms, Ed is one of the Tribe: a gamer, a dreamer, and a creator who was talented and lucky enough to make the jump from the game table to the profession. Perhaps unsurprisingly, it is this leap that is responsible for much of the ire directed at him. As a wise man once wrote, “Those who can write, write. Those who can’t, criticize.” Ed proved he had the chops to get himself noticed, much to the chagrin of those who lack the talent and the ability to realize it.
I, myself, have learned a lot from Greenwood – both good things and bad things. While I have no illusions that everything he’s ever created is a masterwork, he remains the designer who has had the most impact on the way I approach world-building and the people who inhabit it. His Realms gave me a wonderful place to play in during a time when I was still learning the craft, and for that I will always be extremely grateful.
Thank you, Ed.
Posted by Michael Curtis at 12:58 AM

This was a nice piece.
Thanks for the information. :)

I just re-read “From the City of Brass to Dead Orc Pass” last night. That article made an impression on me when I first encountered it. It's like a wonderful blog post, the way it draws in examples from various sources to give DMs ideas, without constraining them: "This is how gates should work . . ."

And while I loved the ecologies, I understand the problematic precedent they set. This article is perhaps the great counter example of how to write for gamers.

I always loved Ed’s magic item articles. I’ve always thought that’s how magic items should be. Unique and with a history. Minor artifacts.

I liked the Ed & Elminster framing dialogs too.

I loved the Ecology articles too. Yeah, so, some people may have picked up that ball and run with it too far. To me they showed me that it could be fun to try to expand upon the description of a monster. Even to let that expansion deviate from the description. Even if my own expansions might head in a less “realism” direction than his did.

(Beyond reading Spellfire, using the map for a brief campaign, and playing a bit of a SSI gold box game or two, I never really had much experience with FR.)

In addition to "The Theory & Use of Gates" article (as it was titled in Best of Dragon #2), Greenwood's "Law of the Land" (Dragon 65) is an apt companion piece to Dragon 63's "Plan Before You Play"), and provided some interesting commentary on his Knights of Myth Drannor PC group.

I've returned to the gates piece and the early articles on campaign development (planning, calendars, deities, laws, etc.) with some regularity over the years, as they're full of good world-building advice.

When you match them with the monsters, magic items, spells, and associated histories, you get a good model for building games: generalize and plan, then furnish the environment with treasures/magic items/spells/monsters that bring out the specifics of the setting's history in play.

Good stuff! Thanks for taking the time to revisit the early 'Realms, Mike: it's been a worthwhile read!

Ironically, Ed's first two monster contributions (Curst and Crawling Claws) are two of my personal favorites; they regularly occur in my campaign world, and some encounters with them have become iconic over the years (like the time the party stumbled into the room with hundreds of crawling claws everywhere, quickly slamming the door in front of them....but not before I noted oneof them had seen the gleam of a scroll case on a table in the room. Heh...took them two sessions to figure out how they were going to get that tube without being torn to shreds!!!).

Ed has had a few monster clunkers, but I also liberally put to use his Baneguard (they are created by evil priests in my world to guard treasure, and as bodyguards) and bonebats, two excellent quirky monsters that can give players' fits.

Ed's world-building articles (especially "Plan Before You Play") were the primary inspiration and template for the camapign world I currently run. Although I've never been a real Realms fan, I do feel a strong debt of gratitude for those articles. In fact, I remember those articles far better than most everything that came afterwards!