As much as I enjoy writing this blog, penning submissions for Fight On! and Knockspell, or creating The Dungeon Alphabet and Stonehell out of mental whole cloth, there are times when I find the end results of all these efforts to be a bit ephemeral. This is especially true since my writing is done on the computer and thus lacks even a finished manuscript to heft in my hands once everything is completed. I miss the tactile reward of a solid, completed project that exists in three dimensions.

Two weeks ago, this lack of the physical began to get to me. My hands were itching to start work on a project that would have a tangible end result. I considered and discarded a few options before remembering that I had starter “Paint Your Own Miniatures” set which I had purchased some years back but never began. The need to do something tactile overwhelmed my initial lack of confidence in my ability to paint something that small (the memories of the miniatures I painted some twenty years ago are unfortunately still as bright as the garish Testors plastic model paint I used), and I broke out the set.

Despite the lack of use, the years of sitting on the shelf had not been kind to the included paints and brushes, so the following day found me at my friendly local hobby shop to purchase a replacement (and to help spread awareness of The Dungeon Alphabet : “Order two hundred copies for the shelves, will you, Gil?”) I came home with a Games Workshop starter kit and two blister packs of minis scrounged from the bargain bin.

A week later, I had finished my first set of miniatures; a trio of vicious mole-men come to the surface world for plunder. While I’m certainly in no danger of winning any awards anytime soon, it’s nice to see that a little bit of patience, combined with much better miniatures, paints, and tools, produces markedly better results than I could have imagined twenty years ago. For the first time since I started playing these games, I know I can finally paint a mini that I wouldn’t be ashamed to put down on a gaming table.

While I don’t picture myself painting Warhammer armies anytime soon, I did find the experience to be an enjoyable one, and I finally see the allure that it has for some people. I was surprised to discover how much the world vanishes when your concentration is so focused on a tiny bit of pewter and miniscule brush strokes. I easily found myself losing two hours as I concentrated; looking up only to discover it was time for me to retire for the evening. It’s a much better alternative to plopping down in front of the TV and succumbing to the urge to snack.

I’ve picked up a few more paints and brushes, along with another set of minis, and started in on the next batch. It’s a simple pleasure and having something concrete that I can point at and say, “I did this,” is a nice remedy to the more ephemeral craft of writing. 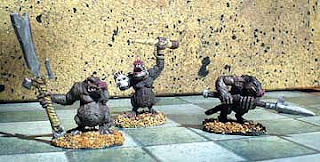 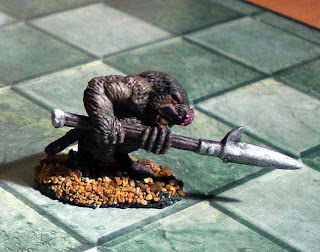 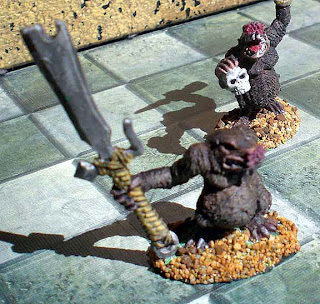 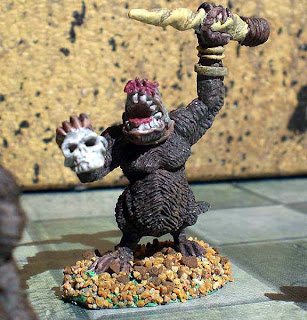 Addendum: Immediately after completing this post, I found that Scott Kurtz, the man behind PvP, recently had his own experiences with painting miniatures. I found it interesting that someone who makes their living with art had such a diametrically-opposed opinion to the experience than my own. I speculate he may hold himself to a different criteria of excellence than someone who works primarily with word-craft, such as myself.

I love painting minis for all the reasons you outlined.

I empathize with your need to "do something tactile." I find that my different obsessions are fairly seasonal...I tend to break out the miniatures for painting in October or thereabouts, and they'll be boxed up again before the New Year. Just go with the ebb and flow, my man...
: )

Those are way nicer than anything I've ever been able to manage. Congrats on having talent in more than one field.

I kind of understand the tactile (although for me it's physical, occasionally need to go out and dig a ditch in the hot sun or similar)

But I don't understand the feeling that electronic writing is ephemeral. Have just the opposite view. Until you posted the pictures to the internet the minis were destined to be seen by only a few people and to be lost in the seas of time.

Internet writing on the other hand is instantly accessible to many, many millions. It is indexed, stored, and archived countless places.

I so don't understand the fascination with paper "publication". Kill some trees, get a few expensive copies of flammable paper, that will yellow & rot with time, so a limited number of people can read your words but only after time, effort, and fuel is wasted getting it to them. Or, the Internet. Were copies are cheap, distribution is cheap and crazy fast, and millions of people will be able to read it.

For me print stuff is "future recyclable", electronic stuff is forever.

Nice work. I picked up a few mini's last weekend to try and force myself to try and learn to paint them so your post was an added inspiration.

I find there to be something cathartic in painting minis (not so much in assembling them) and I enjoy using them at the table top. There's something pleasing about seeing our party at the mercy of a ruddy huge hydra and having all the right models for it wonderfully painted (though credit for that does have to go to our assosciate Mr. Dave who paints professionally).