When gamers get together to reminisce about poor old defunct Dragon Magazine, the tide of conversation eventually turns towards the shores of the magazine’s long tradition of supplementing its usual useful gaming articles with a bevy of entertaining cartoons and comic strips. Depending on the ages of those gamers, certain titles are bound to come up. Older readers will voice their love for “Finieous Fingers”, “Wormy”, “What’s New with Phil and Dixie”, or even “Talanalan”. Later initiates have fond memories of “Snarfquest”, “The Twilight Empire”, “Knights of the Dinner Table”, “Nodwick”, “Dork Tower” and “The Order of the Stick”. The names of artists like Tramp, Phil Foglio, J.D. Webster, Larry Elmore, Aaron Williams, Jolly R. Blackburn, and Rich Burlew get bandied about, with debates as to who was a better artist soon following. One name that often gets left out of these discussions is that of Joseph Pillsbury.

Joseph Pillsbury never had an ongoing, multi-panel comic series in Dragon, but the man certainly made his mark. He was a frequent contributor to Dragonmirth, providing us with single panel jokes that often blurred the line between the worlds of fantasy and everyday life. A quick glance through the Dragon Magazine Archive tells me that Joseph made his first contribution in issue #90 with this piece: 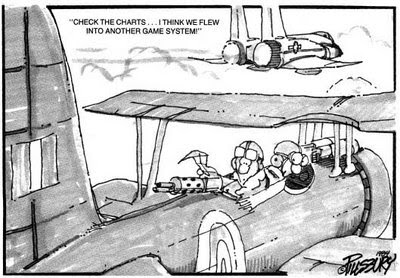 While I don’t have access to my own later issues of Dragon, I know his work was still making appearances as the published run of the magazine was winding down. That’s quite a legacy of grin-making.

I like Pillsbury’s work for a few reasons, but largely I love the way he depicts his “heroic” adventurers. They are not participants in world-changing events or of fantasy of the highest caliber. Instead, his world is inhabited by working-class schlubs who seem to have gotten into their careers by way of rotten advice from their guidance counselors. You can almost picture them punching a time clock before each adventure.

Pillsbury also excels at the skill that all good one-panel cartoonists need, which is to imply the funny, rather than show it. More often than not, the humor in Pillsbury’s work comes from what the reader knows is going to happen next, or what occurred just prior to the reader joining the action. Pillsbury allows the audience to fill in the blanks, which is a strength in single-panel comics, not a weakness.

My favorite Pillsbury piece is one that displays both of these talents. It appeared in Dragon #171: 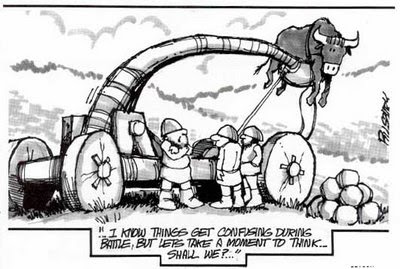 I love this one so much I’ve had it blown up and have displayed it both at home and at the office. We join this trio of siege engineers in media res, and are left to imagine just how exactly this situation came to be, as well as the possible consequences if their superior hadn’t stepped in at this exact moment. The look on the cow’s face just slays me. It is one of equal parts puzzlement and acceptance.

Pillsbury had a love for siege warfare, which would be a strange thing to enjoy had he not been so adept at portraying the humorous side of it. A collection of some of his comics involving siege weaponry can be found here. For a look at one of his “regular Joe” adventurers, consider this guy and his backpack.

Joseph Pillsbury is still drawing comics; although it seems that he’s take a break from the worlds of swords and spells. His most recent project has been Bogworld, an online series of cartoons of a more political nature. Hopefully he hasn’t left the bizarre world of sword-wielders and spell-slingers for good. I could do with some more cows in catapults to make it through the day.
Posted by Michael Curtis at 9:01 AM

Great stuff! Thanks for the links!

Good call. He had one or two cartoons in just about every issue of Dragon when I was reading it regularly, and those panels never failed to elicit a chuckle or three when I read Dragonmirth.

I knew I would miss somebody's favorite strip when I put this together. No intended slight on behalf of Yamara. She just slipped through my mental sieve.

I thought it be nice for someone to tip their hat to Pillsbury. The man was a work horse and always brought a lot of entertainment to Dragonmirth. It's really a shame people don't mention him more, but I can see why the "bigger" artistry of the multi-panel strips tend to overshadow him.

This is really funny stuff!