Every referee worth his or her salt probably keeps one of these. For many years, I referred to the set that I keep as my “dump books”, but having learned the proper term for them, I now prefer the more elegant-sounding “commonplace books”.

A commonplace book, traditionally, is a personal journal where quotable passages, notes, prayers, recipes, comments, etc. are kept for later consultation. Each becomes a scrapbook that reflects the personality and interests of its author. The concept of the commonplace book dates back to the 15th century, a time when writing paper became easily affordable to most. While the commonplace book is usually associated with authors, it’s no surprise that many referees, some of whom are aspiring authors, keep them as well.

A referee’s commonplace book can take many forms: a journal, a word document, index cards, a PDA, a blog, a wiki, or what have you. Personally, since I’ve always preferred the heft and substance of an actual book, I keep several commonplace notebooks in which to stash ideas until they grow to maturity. I have an artist’s sketchbook, which is the oldest of them, three regular marble composition notebooks, and soft cover 3.25” x4.5” marble memo book, which fits easily into my back pocket. Over the years, these books have followed me from dorm rooms, to apartments, to weekend getaways, to bars, to motel rooms, to trips into the mountains and to the beach, and from nightstand to nightstand. In that time, they’ve gathered quite a collection of sketches, maps, names, adventure seeds, world-building entries, monsters, magic items, historical anecdotes, and other ideas that have struck my fancy. Some of those ideas will never see the light of day in actual play, while others are just waiting for the proper time to take the stage.

I’m getting close to reaching a point of pause in the Dungeon Not Yet Named™, so I’m beginning to think about larger things than just the halls of that dungeon. To prepare for this, I’ve gone through my commonplace books looking for old ideas that I might want to include in the surface world to help flesh things out for when the adventurers are breathing fresh air again. Mostly I’ve been looking at maps and town set-dressing, but I’ve run across a few things that I’ve forgotten about over the years. They’re what would be considered “fluff” – a term I very much dislike – rather than “crunch”, but they amuse me and I’d thought I’d share a few of them. They’d appreciate the opportunity of getting out for a change, rather than moldering amongst the pages as usual. Consider them a cross-section of my commonplace books. Chances are that you’ve got some similar gems of your own.

As an artist, my skills ceased developing somewhere around the stick figure. I’ve tried to improve them from time to time, but I’m convinced that I lack the proper genes and talent to ever get anywhere near where I’d like to be. I’ve accepted this fact and moved on, but it doesn’t stop me from trying from time to time. I stick to still-life though.

A sketch of a Sweet Bog Berry. Inspired by my childhood love of beach plum jelly.

Itch Leaf sketch. Also inspired by my childhood, mostly from my yearly run-ins with poison ivy. 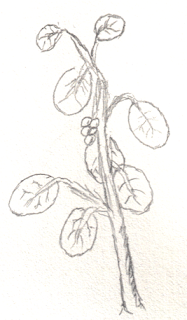 This is an unnamed plant I took to doodling one day. I'm not quite sure what it is or what its properties might be, but the presence of the little berries probably indicates that it can be used in either herbalistic healing or general cooking.

I stole this device shamelessly from Ed Greenwood’s tendency to start chapters in his novels with quotes from various plays and books that exist in the Forgotten Realms. I like this literary device, despite the slings and arrows that have been hurled at old Ed. I much prefer it to a similar device that R.A. Salvatore tends to use in the Drizz’t novels, wherein he separates sections of the book with essays and journal entries penned by a certain drow. At best, those seem to go against the old adage of “show, don’t tell.” At worst, they resemble the MySpace entries of some emo kid.

These short sayings remind me that there is more going on in my campaign world than high adventure and nation-shaking events. I’ve always envisioned adventurers as more “working-class heroes” than superheroes, and little things like this these help keep me grounded in that territory.

“What be stronger: teeth or tongue? Often the tongue destroys that which the teeth could never hope to chew.” - Dwarven proverb

“Buridrin awoke, sighed, stood up, and went to work.” – First line of the Dwarven account of the world’s creation.

Dwarves have always struck me a being very pragmatic folks, yet still possessing a sort of Zen-like wisdom. I think these two quotes sums that up.

Thief Proverbs:
1) If the chicken keeps laying rubies, you don’t kill the hen.
2) The quickest way to grow more daggers is to start planting them in backs.
3) A smart man learns of his lord’s orchard, and only harvests the trees allowed.

Thieves would have accumulated quite a few proverbs regarding their trade, given its long history.

“When I was young, I dreamt of magic, fine drink, and caressing arms as I lay awake at night. Now, I would trade my spells, my treasures, and all my days of pleasure for one dreamless night in a warm, soft bed.” – Rual Sytrik, Pages from the Trail

“Some wise and happy men choose to fill their days by collecting baubles they find comely. I have met a wheelwright who collects tiny forest animals carved from stone. I know of a noble lady who filled her court with birds of bright plumage, and a child who sought out the hair of elves. These little bits of joy help them when the skies are grey and the winter winds blow against the door. I am not a wise, nor a happy man, for I chose to collect problems.”

I like these two quotes the most. They capture the melancholy two older adventurers might feel upon looking back on their lives. The first is from a more successful mage, one who is entering his twilight years. The second is from a grizzled, grey-bearded soul whose still in the game but rethinking the choices he made in his youth. They reflect my own thoughts as I get older.

"Zaltz! Klaublumfun!” – Sign posted at the edge of a gnomish minefield.

My gnomes speak a sort of fantastical pseudo-German. This was my attempt to capture what that language might look like in the written form.

R’Nis is a patchwork world. I’ve got an overall map of the major continent sketched out, but much of it lacks detail. From time to time, I imagine what parts of that map looks like on a smaller scale and try to sketch out the details. The end result is intricate areas of fine design separated by vast areas of vague canvas. I supplement the map by writing adventures in areas that I haven’t yet detailed, which forces me to zoom in on that section of the world and flesh it out. 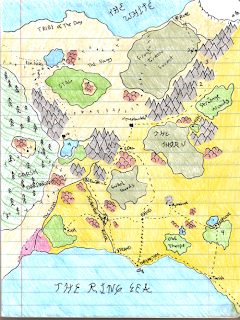 I sketched this region out while sitting in a bar with a pitcher of beer and a handful of colored pencils. I just started doodling and coloring, achieving this as the end result. I've not placed any adventures in this area, but the little bits of local color like "The Tribe of the Dog" have seen use in other places.

I have a simple trick for when I draw maps of little towns and villages: I think "would I like to live there?" With that I mind, I start putting down features that I would enjoy passing on my day-to-day activities, or places that I would have liked to play as a child. It keeps my interest and breathes life into this little hamlets.

This post just made my day. Thank you, Mike. In particular, I think those two maps are simply fantastic.

Some very interesting anecdotes you have there. I've only just started my own "idea book," as I call it...already I can see I'm going to need more blank books soon!

Great stuff, Mike. I've got notes and bits of inspiration scattered all over, but this post has inspired me to (hopefully) centralize it all for better use.

"At worst, they resemble the MySpace entries of some emo kid." lost my lunch.. hilarious.

Well, thank you kindly all. It's amazing how much clutter can accumulate in those books, so I figured I' do something with them.

I started collecting my notes in the commonplace books just aaround 1999 or 2000. Before that, I was very much like PatrickWR and had them all over the place. The little bit of time that I took to put them all under the same few cover was well worth it. The only difficulty now is remembering which of those books has what I'm looking for. Luckily, they're all differnt sizes and colors, so that helps as a mnemonic.

I'm looking at the maps again, and I'd just like to make a note on one of them. The village map of "Gasper Crossing" may or may not be 100% original. From time to time, I've used maps that I've run across in game suppliments as inspiration or stolen outright. I don't have access to a lot of my old game books at the moment, so I can't confirm the provenance of that one. I mention this just in case someone comes along and says "that looks exactly like 'so-and-so'"

“When I was young, I dreamt of magic, fine drink, and caressing arms as I lay awake at night. Now, I would trade my spells, my treasures, and all my days of pleasure for one dreamless night in a warm, soft bed.”

One of the Unknown Armies supplements featured the Therapeutic Pillow, which allowed the person sleeping on it to get a good night of dreamless sleep, and had a long wait-list for its use consisting of some of the most powerful people in the world.