or “Things to Do in Greyhawk When You’re Dead”
The philosopher Jeremy Bentham had interesting ideas when it came to the dead. In his unpublished treatise “Auto-Icon; or, farther uses of the dead to the living”, Bentham posed that people, if they be willing, should find uses for their mortal remains after they had shuffled off the mortal coil. He pictured a world where preserved corpses might one day replace the stone or marble statues that adorned churches, or –with a good coat of copal varnish as weatherproofing – take the place of trees that line the driveways to lavish country estates.
The thrust of the treatise was that dead bodies could be used for the edification and enjoyment of the living, and that corpses should be preserved for the benefit of future generations. He outlined eleven categories in which the dead could find use: “moral, political, honorific, dehonorific, money-saving, money-getting, commemorative, genealogical, architectural, theatrical, and phrenological.” Bentham suggested some uses for the Auto-Icon: collateral for loans; theatrical stage props; aesthetical decoration, such as statuary in the homes of the well-to-do; as subjects for public lectures on human anatomy. He proposed that the church might exhibit Auto-Icons in religious services during holidays, accompanied by rousing and uplifting music. Temples dedicated to famous and infamous characters could be erected, replacing the wax figures in such venues as Madam Tussauds with actual corpses. Auto-Icons could even be used for advertising purposes. Why stop with a simple barber’s pole when “a pair of fashionably-dressed ladies” could serve instead?

Bentham, lest it be said he was less than serious about this idea, wanted his own corpse to be used in instructing anatomy, hoping that it would teach scientists “curious, interesting and highly important knowledge” and that it would “show that the primitive horror at dissection originates in ignorance and is kept up by misconception and that the human body is as much more beautiful than any other piece of mechanism as it is more curious and wonderful.” Bentham got his wish, too. 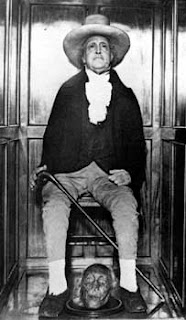 Three days after his demise, a trusted friend and doctor delivered an anatomical lecture with Bentham’s corpse accompanying him. In attendance were friends and supporters of Bentham. The lecture was cut short when a violent thunderstorm struck the area, unnerving even the prosaic doctor. Following the lecture, Bentham’s body was preserved in effigy. His flesh was removed and his skeleton hinged together. His head was preserved, but the results were less than expected. The process employed to remove the fluids from that extremity left Bentham’s head “as hard as the skulls of New Zealanders…all the expression was of course gone.” A wax head was constructed to replace the stony-faced original. His skeleton was stuffed with straw, hay, and wool, dressed in the philosopher’s clothes, seated in a chair with his favorite cane, and displayed in a mahogany-and-glass case. Bentham was ultimately donated to the Anatomical Museum at University College London.
At the college, his body was shuffled about from place to place, residing for a time in a museum, a library, and a faculty office at the college. His real head was stored on a ledge over a door, but was stolen by students from rival King’s College in the 1960s and held for ransom to generate funds for charity. It was returned in exchange for the college not alerting the authorities to its theft. The head is now under lock and key.

Unsurprisingly, several legends have sprung up surrounding Bentham’s remains. One states that his spirit haunts the halls of the building he resides in. At night, the sound of his cane is heard tapping in the corridors as Bentham walks about the building. Another legend, while amusing but untrue, is that Bentham is wheeled into meetings of the college council to sit alongside the staff. His attendance is recorded in the minutes as “present but not voting.”
You can probably guess where I’m going with all this.
I’ve long subscribed to the belief that the strangest fruit grows from the soil of reality. Turn over enough rocks strewn along the path of human history, and you’re bound to uncover some very strange anecdotes and events that, if magnified and expanded upon, can make interesting situations within your fantasy campaign. Bentham’s treatise and real-life case is ample fodder for the imagination.
Adventurers can be rather blasé when it comes to the dead. A lifetime of looting corpses encourages a cavalier attitude regarding the recently deceased. It usually takes the undead to get them sweating, and even then, unless the undead is one of the level-draining varieties, they tend to take them in stride. In order to unnerve the players at the table, and thereby their adventuring alter-egos, creativity and unaccustomed thinking is required.
Bentham’s case serves as a springboard for diving into uncharted waters of the imagination. If his ultimate fate is not interesting enough, the world he pictures in his treatise certainly is. All that’s required of the referee is to gently steer the players into that territory and see how they react.
Imagine the party coming upon a small town during their travels, only to find that the streets and shops are adorned with the shellacked remains of the departed. The preserved corpses of former merchants advertise their successors’ goods and services, or perhaps serve as signpost to direct customers towards the right streets. A memorial in the town common, dedicated to the town founders, is composed of those self-same founders posed to convey a noble visage. As the party stands gobsmacked by this weird vista, they witness a lively funeral procession departing the local house of worship, bearing the deceased on their shoulders and heading towards a burbling cauldron of resin.

If the players are like most of their kind, it won’t be too long before the detect evil spells start flying and they begin looking over their shoulders, awaiting the imminent arrival of the necromantic cabal that has this poor settlement in thrall. That is if they’re not too busy fleeing for their presumed lives, convinced that a diabolic cult lurks behind the villagers’ welcoming faces.
Of course, you and I know that there is nothing nefarious lurking behind the scenes. This just happens to be the quaint custom of this village for dealing with the deceased. But it’s going to unsettle the players something fierce. Things could get more interesting if the party has arrived in town in need of the divine powers of the local clergy and must confront this custom head on. How tolerant can the party be, especially clerics and paladins of rival faiths, when witnessing this uncouth handling of mortal remains?
The above scenario takes place in the bright, sunlit lands of the surface world and is unsettling even there. The effects of encountering the preserved dead in the dank dungeon halls will only be multiplied. Any gamer whose spent some time around the table is bound to have encountered the obligatory “statue garden” that medusas seem fond of cultivating. A collection of lifelike statues, usually found in positions of fear or surprise, is a sure indicator that death by petrifaction is just around the bend. What will the adventurers think when they find a similar garden composed of the un-putrefying dead? Do they face some strange new monster created by the referee? Or is this just another indicator that the dungeon’s creator is horribly and incurably mad, and eager to add them to his collection? Either way, they’re bound to start jumping at shadows.
Before we close the door on this macabre source of inspiration, let’s turn the weirdness dial up one more notch. In the fantastical worlds that adventurers pursue wealth and glory in, the presence of magical communication with the dead is possible, if not common. It is also a world where the demise of a good and beloved ruler has more than once led the way for the ascendance of a cruel and incompetent replacement. What if a city, or even an entire nation, took steps to ensure that they never lose their beloved ruler to the grave?
The party learns that a mighty king is in need of the services of brave adventurers. When they arrive at that king’s seat of power, however, they are shocked to discover that the king has been dead for some two hundred years. Dead, but not out of the loop, politically. His earthly remains, now perfectly preserved and revered by the populace, still sit atop the throne. The daily functions of the nation are attended to by his regent, the fourth person in that position since the king’s death, but when it comes to the big decisions, it is the deceased king’s shade that is consulted by arcane or divine means. It is his court priest or magus who conveys the king’s need to the party, while his silent form sits watching. Of course, with the decrees of the throne coming from a living mouthpiece, can the party truly trust that they are fulfilling the desires of the deceased monarch, or are they merely cat’s-paws for another hidden agenda?
The idea of a preserved noble need not be confined to grand schemes and nation-shaking events. Adventures of a smaller scale could be livened up with the use of a preserved corpse. The classical cliché of the abducted princess in need of rescue gets new life breathed into it when the princess is dead, and it is her preserved remains, much beloved by her grief-stricken father, that needs rescuing. Caution should be taken if the referee goes this route, however, as the inclination for Weekend at Bernie’s-type shenanigans might ensue.
After running through an adventure or two that feature the presence of an Auto-Icon, the party might have a new sense of respect, or at least some interesting tales to tell, when it comes to cavorting with corpses.
Posted by Michael Curtis at 9:01 AM

What if the characters themselves were believers in this kind of repose for the departed? How would the players deal with that?

Imagine a dungeon where the players have reason to believe that their every move is being watched (but is it really?) from a central location. How creepy would that be?

If we cleave directly to Bentham, a system of punishments might be involved when certain "rules" of the dungeon are broken. Or there might just be the creepy sense that the denizens of the dungeon are disturbingly and unnaturally prepared for the PC's every move.

Perhaps they are being watched through the eyes of statues that are found sprinkled throughout the dungeon, or through an elaborate system of mirrors.

Funny you should mention that...

There are indeed things in Ol' Nameless that have an invested interest in what the adventurers do down there. And not all of them have the same goals and desires, so it's quite possible that some of those entities might assist the party, merely to oppose another's planes.