A comment on one of the posts over at Greyhawk Grognard dislodged a memory of mine from my college years. During my undergrad career, I chanced upon a reproduction of an Italian artist’s etching that featured a vast underground location. The piece depicted a large space adorned with chains and strange statuary, cloaked in an atmosphere of smoke and despair. I was captivated by that piece, and remember thinking that it would be a great dungeon setting. (Sometimes it’s hard to shut off the internal DM Machine.) But as time went on, I forgot about the piece and eventually shuffled out of the hobby for awhile.

Thanks to the comment by Eli Elder, I was reminded of that artist and his work. The piece was by Giovanni Battista Piranesi (1720 -1778), an artist who was known for his etchings and engravings that depicted the ancient edifices of Rome. In addition to those works, Piranesi produced a series of sixteen prints known as Carceri d'invenzione (“Prisons of Imagination”). These etchings were untitled, but have since acquired names referring to the scenes they depict. Piranesi’s prison is a gloomy, forbidding locale, and would influence the Surrealism school of art that arose during the early 20th century. His use of staircases and hanging galleries seems to have inspired the works of the Dutch artist, M.C. Escher.

As a referee, especially one currently involved in the crafting of a megadungeon, I find these pieces to be rich fodder for the imagination. All too often, we think of the dungeon as a cramped space. Piranesi shows that this need not be the case. Of course, Piranesi didn’t have to worry about setting his etchings down on graph paper, or consider the possibilities of movement and range during combat. To duplicate some of his works directly into a dungeon setting would require that the referee be willing to make considerations outside the pale of normal dungeon design. The end results would be more than worth the effort, however.

Since I’m approaching a point where I need to pause in the design process of Ol’ Nameless, I think I might consider using at least one of these pieces as a location within the dungeon. I could work some of the dungeon around this set piece, and take the needed time to compose an encounter that takes advantage of this zowie! In the meanwhile, please peruse the selected images below for your own inspiration and enjoyment. The complete series is available here. 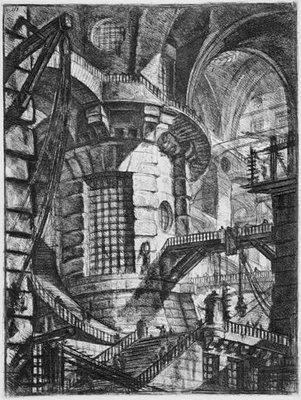 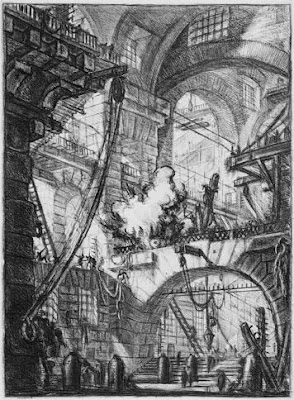 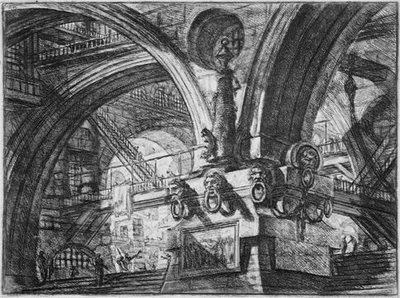 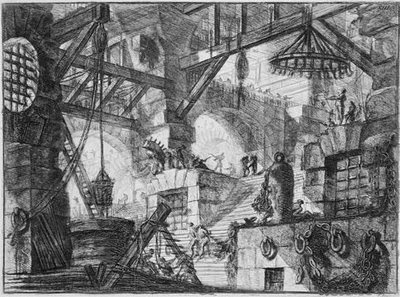 These are seriously awesome! They're also just damn good art -- ol' Giovanni really has a keen sense of spatial organization.

I would imagine that a trip to a dwarven city would look like this. Even the implements of torture would stay. In an active city they would contain criminals on public display, not for warning purposes but so the general population could be sure that the punishment was being handled in an efficient manner. Dwarven prisoners might just demand this public display as enduring these punishments with a stoic decorum could be seen as a sign of contrition and would allow for an easier re-assimilation into society.

Of course there would be other prisoners, prisoners who could not withstand the rehabilitation the legal system prepared for them. Now it is later, centuries later, and something of those prisoners is still chained to that wall and still suffers. It would like you to suffer too.

Ah, you beat me to doing a post on those pictures. :-) I had never seen them before; quite inspiring stuff.

Sorry, Joseph. Hope you don't think I was poaching your preserve. Eli's comment made me remember these and I thought they we're too good not to share.

How inspiring! Don't laugh, but it sort of reminds of the prison design in Kung-Fu Panda, which was also sort of inspiring.

I can't believe I just typed that, but its true. :)

Not at all! Teach me to be lazy and "I'll get around to it eventually"-ish when it comes to blogging. :-)