As I spend the first full day of my 36th year contemplating my navel and my place in the cosmos, please accept these maps from my commonplace books as gestures of goodwill, and a reminder that we never know what's out there until we venture forth for ourselves. 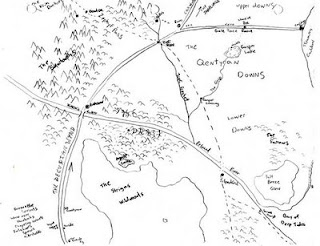 This area lies several leagues north of the Xultvar, the City Resilient, which serves as my stand-in for Lankhmar, Greyhawk, Waterdeep, etc. Part of the Eastern Reaches of the old empire, the area has descended into a collection of city-states and independent towns held loosely together by the traditions of the once-mighty empire. If you cut a left through the Zephyr Pass, you'll end up in the territory where Ol' Nameless is placed. 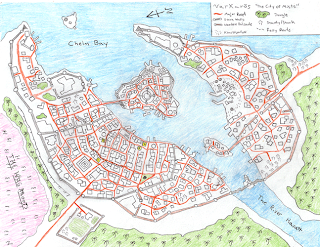 Behold Varkarös, "The City of Mists". Varkarös is located on a stub of land down in the southern jungle continent, wherein lies the remenants of Xoryphaal - kin to our Atlantis here on Earth. Varkarös is part ancient city filled with strange architecture and part Port Royal, Jamaica, inhabited by free-booters and scoundrels. Go deep enough into the jungles and you might find The Dwellers of the Forbidden City.

An unnamed village that I sketched out in an attempt to create a settlement that remained somewhat realistic. I again employed the old trick of drawing a place I'd like to live. Those marks just south of the hill by the river indicate where the teenagers of the village go to race their fathers' horses and indulge in the past times of youth.

The quiet town of Tinfi Run. The closest settlement to nearby Dead Ox, and gateway to Zephyr Pass. Ever since the mountain giants took out the bridge in Rushscar, Tinfi Run has seen a influx of traffic coming up the old road to the southeast. Damn mountain giants and their drinking binges of fermented giant goat milk...

Wow, these are really good. I especially like the village one. Looks like something from an Ordnance Survey map.

Happy Birthday, Mike! Just turned 36 myself a week ago.

hAppY bDaY!!! Turned the 36th corner myself in september.

the maps are very nice. I really like the city map that you have at the top of your blog

Boy it doesn't get much better than that. Hints of Atlantis, pirate scum, AND the jungle locale for Dwellers of the Frobidden City. That's my kind of fantasy.

Thank you all for the well-wishes and the compliments.

I find that cartography is one of the many things that I enjoy about RPGs. Having a complete lack of artistic skills when it comes to depicting realistic forms, I derive much pleasure from working with the symbolic and abstract images required in map-making.

The downside is that I end up with maps of places that will probably never be visited, simply because I felt like drawing something, rather than as an extension of a planned adventure or world-design. But there are worse problems for a referee to have when it comes to these games, so I cannot complain too much in that regard.