I’m working on a book that brings detail to a section of the October Country known as Snakewater Swamp. It’s been a lot of fun and is helping me to focus on certain systems I want to implement in the game and to flesh out the world in greater detail. I won’t say much more in the meantime.

Like the rest of the October Country, the wildlife found in Snakewater is largely of my own creation. For various climatic reasons, gators aren’t nearly as common as they are on Earth, but that doesn’t mean the swamps are free of large, aquatic predators. The swamp shark fits that bill wonderfully and has the pedigree of being inspired by the late-night, Sci-Fi channel cheapy movie of the same name. If you’re going to watch crap, you might as well make the best of it. 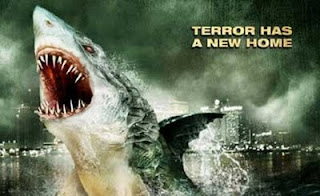 Swamp sharks are a species of shark that has adapted to the brackish and freshwater conditions found in coastal marshes. Their adaptations allow them to venture further into the headwaters of coastal rivers and bayous and many have begun to use these areas as nurseries for the pups. Full grown swamp sharks range in 8 to 11 feet in length and can weigh up to 700 lbs. Skin tones are brownish-gray to dark green, giving them natural camouflage in the muddy waters of the swamp. Swamp sharks are usually solitary predators (85%) but are occasionally encountered in pairs (15% chance). They attack by rushing their prey from concealment, biting their victim to shear off flesh, and then move past their prey to devour the mouthful of meat. They turn and make another pass two or three rounds later.
Posted by Michael Curtis at 3:33 PM

Don't we call those bull sharks here on Earth? :p

Seriously, I may be misremembering the breed, but I do recall that there is a type of shark that does meander up rivers into the freshwaters. Which is another reason I don't go swimming. Drowning being the other.