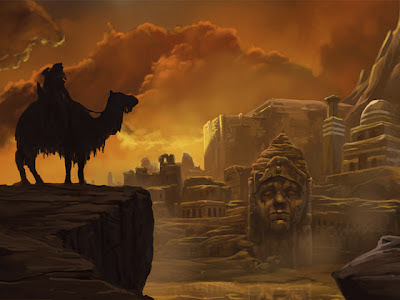 A new Kickstarter campaign has just been launched for Tales From the Fallen Empire, a 3PP supplement for Goodman Games’ Dungeon Crawl Classics RPG. Tales of the Fallen Empire is a post-apocalyptic swords & sorcery setting inspired by the works of Fritz Lieber, Robert E. Howard, Lynn Carter, H. P. Lovecraft, Roger Corman, and Michael Moorcock. It’s being produced by Chapter 13 Press and here’s the skinny on the setting:

1OO years have passed since Mankind revolted and slew the Sorcerer Kings of old… Now, the survivors of seven kingdoms begin to rebuild, placing new lives and hopes on the ashes of old. However, even as life continues, an ancient and forgotten evil stirs awaiting its moment to strike against mankind.
Join a war-torn land where the struggle for survival continues as new empires arise to impose their will upon the masses. Vicious warlords fight to control territories carved out of fallen Kingdoms. Imposing magicians emerge claiming the legacy of the Sorcerer Kings. High Priests of long forgotten gods and goddesses amass wealth in the name of divine right while Warrior-priests, devoted to a banished god, patrol the lands bringing justice to people abandoned by their rulers.
Within these pages is a detailed post-apocalyptic fantasy setting taking you through an ancient realm that is fighting for its survival and its humanity. Seek your fortune or meet your fate in the burning deserts of the once lush and vibrant land of Vuul, or travel to the humid jungles of Najambi to face the tribes of the Man-Apes and their brutal sacrificial rituals.
Tales From the Fallen Empire is a post apocalyptic swords & sorcery setting created for use with the Dungeon Crawl Classics RPG by Goodman Games.  It introduces new classes, an alternate way to handle the 0 level character funnel, setting inspired spells, new optional rules for swords & sorcery play and more.  Tighten the straps on your sandals, grab your weapon, and head forth into a land of trouble and turmoil. Adventure  awaits those foolhardy to enter the wastelands or for those who fear not the unknown. Pledge today to begin the adventure in the fragments of the Fallen Empire.
I’m one of the writers slated to contribute to the book and your funding means you keep me working! I’d be ever so grateful if you stopped by the Kickstarter page, gave the project a look, and help make Tales From the Fallen Empire a reality.
Posted by Michael Curtis at 6:10 AM

One hard cover for me please! :)

That title always reminds me of the MtG expansion.

Limited edition for me!