Kingmakers I Have Known

I’m still in head-down-fingers-flying mode while I work on the book, but I’ve reached a natural point of pause so I thought I’d compose a few words about something I read and something I remembered recently. 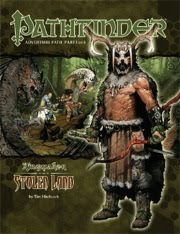 Last weekend, I got the opportunity to flip through the first installment of Paizo’s latest Adventure Path series, Kingmaker: Stolen Land. After reading the introduction, background, and the initial encounter, and then flipping through the rest of the book and reading the enclosed short story, I put the book down with the intention of never picking it up again—which, in this case, is the highest praise I can give it.

Simply stated, that brief exposure was enough to make me want to play this one through, and that’s quite a feat (no pun intended) since I’ve no desire to go back to the morass of rules which is 3.5 (or 3.75 or Pathfinder or whatever the kids are calling it this year). In the hands of a decent referee, one who knew a little bit about what a sandbox was and how it differed from the traditional Adventure Path, this one could be a blast. Hell, I’d even be willing to take the role of party leader if I played this one. For those who know me and my general dislike to be the guy in charge, that admission alone indicates how impressed I was with the book.

Of course, since I didn’t read the whole thing, I can’t make a hearty recommendation to others, and I might be completely disappointed by the path in actual play. I’ve been intrigued by some of the Paizo-produced Adventure Paths during their run with Dungeon, but the dew came off the rose quickly after the initial two or three adventures. Once they got out of the sweet spot of mid-level (and I mean old school mid-level, 5th-7th), I wasn’t so charmed anymore. This could be the case with the Kingmaker path, too. However, I'd be willing to give them the benefit of the doubt and let them prove they can really do an old school sandbox with new school rules. If your planning on running this series and need an old school player to roll up a fighter, I'll sit down at your table and gleefully take part.

Now, the whole time I was reading the book, I kept feeling something plucking at a mostly forgotten chord in my memory. Kingmaker? Why is that so familiar? I must have had some association with that in my past. Then it dawned on me: Kingmaker was the name of a wargame that I used to play way back when. 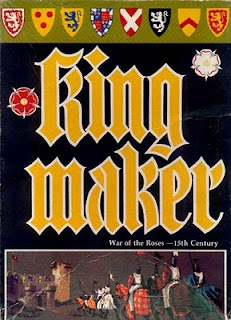 I’ve been trying to remember the title of that game for several months now. I thought it was called “War of the Roses” or some other derivative thereof, but, with my memory refreshed, I checked out BoardGameGeek and, once I saw those event cards, countless lazy summer afternoons came crashing back.

I couldn’t have been more than 12 (the minimum age recommended for the game) when I was introduced to it at my friend Greg’s house. I suspect it might have originally been intended for his Dad, but we kids co-opted it right quick. I can’t remember a single rule of the game, but the heraldry detailed in the game remains crystal clear. I think it’s time to see if I can track down a copy of the edition we used to play and put it on my tiny wargame shelf next to Outdoor Survival.

So that’s Gregg Press editions of the Fafhrd and Mouser books and a used copy of the 1976 Avalon Hill bookcase version of Kingmaker in case anyone’s wondering what to get me this year as a present. Just in case you were stumped for gift suggestions.
Posted by Michael Curtis at 9:01 AM

My dad and I played a lot of Kingmaker when I was a kid. I have my own copy now, though I don’t often get the chance to play it.

I think the thing I like the most (at least from a design viewpoint) is the way that the designer varied the size of the spaces on the board rather than just laying down a hex-grid and coming up with terrain and other movement modifiers.

I think that it came out from Ariel Games before Avalon picked it up. My copy is from Gibbons Games.

Along with Escape From Colditz, it was a favorite back when I was kid. I was never all that good at it, but its politics and use of individual knights really appealed. I have played it since and enjoyed it. I admit that if ever I had the space and time, I would run it as a PBM/PBEM.

I wanted to talk about my experience with Paizo's Kingmaker supplement, but it turns out I was a bit too verbose. ;) As such, if you care, I've posted my thoughts here: http://keithalanjohnson.blogspot.com/2010/06/kingmaker-adventure-path-so-far.html

I love, love, love the old Avalon Hill Kingmaker. I have a copy I treat gingerly.

If you (or any posters here) get into the Chicagoland area and want to get together for some Kingmaker (AH 1974), just let me know and I'll set it up. We just played last night and I've been part of games at EN Woirld Gameday 26, Little Wars 2010, GaryCon II, and Conception 2009 over the last year. It's a favorite of mine and partial inspiration for much of my RPGing, too.