File Under “Things I Wish I Had Said” 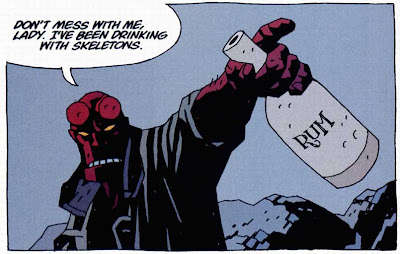 Leave it to Red to sum up my feelings at the moment. Man, am I beat.

This week was pretty much shot to hell, but in a good way. I managed to continue to beat the book into submission and I can see the end of the path through the forest of prose now. I’m confident that I’ll everything but the crying done by the end of the month, just in time for me to enjoy a nice break for the Fourth of July. I’ve even managed to start in on this next mysterious project and, after the literary knife fight which the current book began with, the manner in which this one is rolling off the fingertips is an oasis in the Drast of Creative Desolation. I have a good feeling about this one. Hopefully, I won’t be the only one.

GWAR was an unfortunate disappointment and if the show hadn’t been cheap and local, I’d be mighty pissed. The problem was mostly with the venue and with the people I was forced to share my quadrant of it with. I was glad that I finally got to experience them live, as it confirmed something that I’ve long suspected: GWAR is one of those rare bands which is much more smarter than the majority of its audience. If only some of those knuckleheads at the show realized that the butt of the joke was them… Luckily, it looks like Mike’s Punk Rock Summer 2010 has gained a new date, for Blondie’s playing in the city come August. GWAR and Blondie in one summer; one can’t dispute that I have a wide range of musical appreciation.

I haven’t so much as looked at the swag I got on Free RPG Day. I wish I had snagged a copy of D-Infiity, but I missed that it had Mutant Future content and put it down as another indie and 3.5 RPG game mag. I did walk away with the Harn quick start and adventure. Since I’ve had absolutely no experience with the system or setting, I’m looking forward to reading it…as soon as I get a free moment, that it. So, September, maybe?

I’ve got a few things on the line for next week, possibly a piece of news or two to reveal, but we’ll see where we end up after the weekend. I still need to polish up a few things for my Watchfires & Thrones session on Sunday and I’ve got a handful of minis that have been begging for a coat of paint—so I can unleash them on the players in the next session or two.

Enjoy your weekend, folks. I’m off line until Monday.
Posted by Michael Curtis at 11:51 PM

Gwar was here last fall, well, near enough. They weren't bad, the fun, schlocky campy GWAR as always, and it was fun to see the younger people astounded by the sheer...GWARness of it all.

I am jealous of you seeing Blondie too, however, Natalie Merchant will be at a nearby winery. I love that haunted voice of hers, but it doesn't compare to Debbie Harry's.

(my mp3 player has all three on it currently, and some Viking death metal, 90's acid/industrial, old Black Sabbath, Megadeth, GnR and, well a bunch of other stuff)

Congrats on the productivity. I enjoy your work!

You went to Gwar and didn't tell me? WTF, Mike?