Mike Comes Clean About His 3.5 Past. Is a Run for Public Office to Follow? 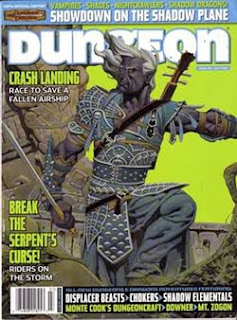 I just wanted to write you a brief letter in regards to Matthew Hope’s adventure “And Madness Followed,” in issue #134. I’ve been a long time fan of the works of Robert W. Chambers and H.P. Lovecraft, especially those stories that involve Hastur and the assorted trappings that accompany those tales. When I saw Dungeon #134 on the magazine rack, the blurb about the King in Yellow immediately caught my eye. I thought to myself, “That can’t mean THAT King in Yellow!” I was quite pleased to be wrong in this regard.

Mr. Hope has crafted an excellent adventure that seamlessly intertwines all the inherent creepiness of the King in Yellow with the fantasy adventure of D&D. As a DM who has used Hastur and the Pallid Mask in some of my own D&D games over the last two decades, I was very excited to see them appear in an adventure that is sure to win a few more fans (err…lost souls?) to the King. The sidebars add to the usefulness of the adventure by providing not only descriptive background color, but the crunchy bits for the DM as well. It is adventures like these that make Dungeon such a valuable aid to the DM. I know I plan on swapping out a few of my old Carcosa house rules with those introduced in “And Madness Followed.” Kudos as well for including a selected bibliography for DMs looking for more information about the King in Yellow. In addition to those mentioned, I’d also suggest Pagan Publishing’s Delta Green: Countdown sourcebook, which includes an excellent chapter on a slightly different way of using Hastur in a game setting.

Matthew Hope deserves a hearty round of applause. Excellent job, Matt! I thought I was the only DM twisted enough to use the Yellow Sign in my adventures. Excellent job as well to you folks at Dungeon for publishing this adventure.

While I have you, let me add my accolades to the pile in regards to the Age of Worms Adventure Path. The Hand of Vecna, the Rod of Seven Parts, and Kyuss AND Dragotha? It warms my old first edition heart. Bravo!

Thanks for the heartfelt response, Michael! All of us on the staff are obsessive nerds about several things, and “weird” fiction and first edition D&D top the list! I was introduced to the work of Lovecraft, Moorcock, Leiber, and dozens more by Dungeons & Dragons, so running adventures and articles that point to the literary foundations of our hobby is just one way of paying back D&D for all of the great stores it’s led me to over all these years. When James and I first started talking about this stuff years ago, we feared we were in the minority of D&D fans, but if anything, enthusiastic letters like this one make us realize that we are legion.

Wow. Was that really four years ago?

You can forget about public office with an FBI file the size of yours.