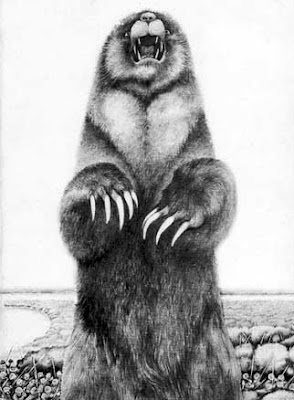 The cult of Guraul has only recently made inroads to the civilized lands along the border of the Kinan-M’Nath. In recent years, the arrival of one of the Great Bear’s nomadic bands to the thorpes and homesteads that dot the frontier have grown more common, and crofters have become used to the colorful wagon in which these adherents travel. For these isolated homesteads, the Bear Priests are often the only form of semi-organized religion seen all year, and the minor miracles and blessings the priests perform are warmly welcomed.

The worship of Guraul arose less than three decades ago when the totemic beliefs of the western barbarian tribes met with the more civilized tenets of Warden Rangers, resulting in a totem-based religion adorned in highly-formalized ritual and mystery-work. Elevated to the ranks of minor godhood, Guraul the Bear Totem is now venerated as a deity of healing, wisdom, and protection. His worshippers and priests are predominately human, although a handful of demihumans have been adopted into Guraul’s ranks as well.

As would fit their wild origins, the priests of Guraul are hirsute individuals, and neither the men nor women who pay homage to Guraul trim their hair. They dress in simple homespun robes and protect themselves with cudgels and staves. Despite their gruff-looking demeanor, the followers of the Great Bear are both friendly and goodly-aligned, and they will lend aid to itinerant adventurers encountered on the road provided that the party doesn’t seem bent on evil deeds. Donations for such services are encouraged of course, and a few gifted coins are usually rewarded with snippets of rumor or gossip as well as clerical aid. Those unable or unwilling to donate are given a simple nod and a wish that “The Great Bear watches over you.”

The priests travel in covered wagons adorned with yellow-green banners and wind chimes, both of which herald the arrival of the priests to a new locale. They typically bivouac in or near one of the many small homesteads or settlements along the frontier, and spend between 2-8 days before moving on. When encountered on the road, the priests offer to host travelers for the evening in return for some minor form of entertainment such as song, music, dance, or ballads. Those in true dire straits are hosted gladly and without the need for recompense. A typical band of Bear Priests is composed of an 8th-level cleric, 3 5th-level clerics, 10 clerics of 1st-3rd level, 15 laymen, and 2 others of various backgrounds (typically ranger, fighter, elf, halfling, or thief). Each band has 5-7 wagons.
Posted by Michael Curtis at 9:01 AM

I think I recognise the picture. Is it from the fantasy novel by the author of Watership Down?

Yes, it is. Shamelessly stolen from the cover of one edition of Shardik.