It’s amazing what a change of mental scenery will do for the creative process. Sometimes just changing genres for even a short period can result in unexpected mental leaps.

I mentioned last post that my character was adamant that the body count in the CoC game could be explained away as the actions of an angry bear. When we found a body that was suffering from both a massive bite wound AND signs of strangulation, that theory began to unravel (hence the “bear and boa constrictor working in tandem” alteration to the hypothesis). Another investigator proposed the counter-argument that we might be dealing with a bear armed with a garrote – a culprit I then dubbed “Thuggee Bear” after Antonio Fargas’ character on “Starsky and Hutch.”

Thuggee bears are mutated grizzly bears that have grown to prodigious size. In addition to their huge stature, two pairs of tentacles grow from their shoulders and their fur is a bright yellow. These massive ursine monsters are prone to anger and it is only their near-blindness that allows the occaisonal victim to escape a thuggee bear attack alive.

Thuggee bears attack first with their 10’ long tentacles. These tentacles constrict victims on a successful attack and deal 1d3 points of damage each successive round. For each tentacle constricting an opponent, the victim suffers a cumulative attack penalty of -1. A constricting tentacle can be cut off if a total of six or more points of damage are dealt with one blow. Once a victim is entwined by its tentacles, a thuggee bear will drag it close to unleash it deadly claw/claw/bite upon it. It gains a +2 bonus to attack any creature wrapped in its tentacles with its claws or bite (thus nullifying its vision impairment modifier).

While many travelers claim that a thuggee bear is the worst example of altered bear stock roaming Ruint Ert, a recent tri-D photo taken along the shores of the ‘Cific seem to indicate something much worse stalks the lands of Gogun: 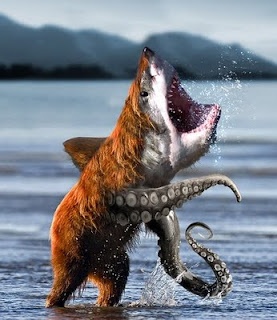 Picture from Cult youth
Posted by Michael Curtis at 9:01 AM

I will really try to use this somewhere - just because ripping shit off from other DM's is the highest form of Flattery.

Just keep Zoltan away or set yourself up for a back stabbing.

For the second day in a week, you're my hero.

I think you've been scooped: