Lionel Price Will Not Write the Great American Novel

Yesterday, I took a break from the sword & sorcery genre and ventured down to my FLGS for Cthulhu Day.Despite a late night with my regular gaming group, it had been too long since I played CoC and I looked forward to Sanity shattering horrors and a high body count. I was not discouraged on either count.

I arrived promptly at 11 AM to make sure I snagged a spot in one of the CoC sessions, and spent the next several hours playing Lionel Price, a burly writer who was quite convinced most of the shenanigans of the scenario could be explained away as the actions of a rampaging bear (later amended to “a bear and a boa-constrictor working together”). Alas, poor Mr. Price’s bear theory proved to be horribly wrong and I became the first PC casualty of the game.

It’s been far, far too long since I played Call of Cthulhu, but the mechanics are so simple to remember, I was back in the swing of things in minutes. If I had any difficulty at all, it was that I was hesitant to rely on the use of skills to resolve anything. I kept asking probing questions or double-checking the scant evidence we accumulated to see if we overlooked something critical instead. It’s been so long since I played a skill-based RPG that I kept forgetting you were supposed to use those things once in awhile. No matter though; skills wouldn’t have saved me from the tentacle/maw combo that ingested our budding writer. 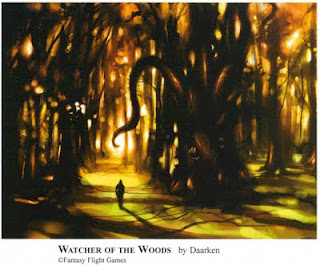 The scenario we played was entitled “Engine Trouble,” and will be appearing in an upcoming publication from Miskatonic River Press. The scenario’s author and MRP President, Tom Lynch, acted as our Keeper for the game. I won’t say much about the story other than it started with a blocked bridge, a corpse, and a thunderstorm, and progressed quickly downhill from there. It was surprisingly combat-heavy for a classic era CoC game, which surprised me. Reexamining it, however, I see that that was probably for the best for a one-off game store run, but I’m still more used to slow, methodical investigation followed by sudden violence, insanity, and death when it come to CoC.

However, my main problem with the afternoon was not the scenario, the TPK that it ended in, or the more violence than expected. Instead, I was unlucky enough to have to endure the session with the type of gamer I detest more than any other you’d care to mention: the pedantic loud-mouth.

I’d rather sit next to the socially inept gamer who smells like cat piss than have to play with a PLM. To make matters even more unpleasant, this particular PLM is one of the owners of the store – a fact which had escaped me up until today. I’d seen him in there from time to time before, but took him to be one of the usual social flotsam and jetsam that accumulate in such establishments.

So instead of having a great game with the four guys we had started off with (PLM was a late comer), I had to listen to this ass spout wisdom on such topic as the mechanics of a 1920’s engine and ninjutsu, and have the unwelcome revelation that he had predetermined that he’d be the hero of the scenario minutes after he joined in. A role he was so determined to fulfill that he actually shot one of the investigators (the cop) in order to get back possession of the scenario’s MacGuffin.

I had to pause here a minute before continuing because only by writing about it did I realize how much this guy grinded my gears today. I’m usually a pretty laid-back guy and I’ve been around the block enough times to realize there will always be these types of social misfits in the hobby. Goddamnit though, I hate it when stereotypes prove they’re based on fact. It’s because of people like this that I keep my participation in this hobby quiet more than anything else. It’s also one of the reasons I don’t play in more pick-up games. I hate to have to game with people like this more than once a decade or so. I take some solace in the fact that the cop shot the PLM in return, killing his character and removing any chance of him doing anything worthwhile to stop Armageddon and be the hero of the hour.

Other than PLM, I had a good time and it was nice to while away the afternoon in 1920s New England (a time and place I’ve expressed a fondness for in the past) rather than a gloomy dungeon set in a pseudo-medieval realm. Once Miskatonic River Press releases the book with “Engine Trouble” in it, I’ll probably be moved to pick up a copy of my own, if only to find out everything that was going on during that stormy autumn night along the Aylesbury Turnpike. In fact, today was enough of a reminder of how much fun CoC can be that I’d even consider playing in a semi-regular CoC game group. It sounded like there were some rumblings about getting one together at the game shop yesterday.

Unfortunately, it also sounded like the pedantic loud-mouth would be playing in those.

Life's too short to spend any of it playing with jerks.

It's unfortunate that the socially damaged are always the ones to represent the hobby. So many nice, ordinary people out there, yet this kind of guy ends up as the poster boy. Maybe next time, you should just bring a taser.

I'm there with you Mike. I also hated playing with that particular loud-mouth and I was also surprised to learn that he was the store's owner. I guess they keep him in a closet somewhere as his lack of social skills would surely kill the business. If it's any consolation, at least his character got killed by the policeman's return fire.

(later amended to "a bear and a boa-constrictor working together".)

This just jives with me in a way that made me almost laugh out loud in the computer lab. You sir, are my hero for the day.

Word Verification: brersound (the sound of shenanigans in the forest?)

> It's unfortunate that the socially damaged are always the ones to represent the hobby.

> It’s because of people like this that I keep my participation in this hobby quiet more than anything else.

There's more than one cause and effect here. I implore you and others to speak up, represent our hobby do not hide it. Don't let losers be our representatives.

Too damn bad that That Player should stop you from getting in on a regular CoC game.

LOL, sounds like the situation here. The "silent partner" of the FLGS is such an embarrasment to the actual, full time owner, he has limited his comings and goings in the store. The "silent partner" however can sometimes be found inside, spewing his obnoxious opinions far and wide in a loud, know it all voice. Just to let you know what a tool he is, he was (and still IS) a fervent John Edwards supporter (you know, the political candidate that cheated on his cancer ridden wife with some chick he hired to do the video for his campaign spots), and he continually whines how "John" got a bad deal and hopes he can still get back into politics someday, because he had the right stuff. I didn't even mention the fact he's overweight, homely, and lets fly loud gas bombs without the slightest apology (ok, maybe I just mentioned that). His resemblance to your nightmare is that he often sits in on games...ANY game...and proceeds to tell the gamemaster exactly what they are doing wrong in a loud and annoying voice, completely ruining the game for everyone. He's been banned from coming on on Saturdays (that's their open gaming day) due to several confrontations with gamemasters running games he's horned into.
Thanks for letting me unburden! Maybe his dude is your guy's twin? I'll have to find out if he has a brother somewhere out there...

Exact reason I stopped playing in pick up games. Whether at Men at Arms, or Suny Stony Brook, or ICON/Gen Con, or Waterloo...I often wound up with someone dickish enouigh at the group that it made even playing for a short while unbearable.

It was one of the great things about MTG - even if I was stuck at the table with a douchebag - the game was short enough that I could get up "walk a bit" and then rejoin another game and table with other people.

Sorry Mike, and I was hoping to just come down and poke my nose around on Sunday. Sounds like I didn't miss anything.

Yeah, both the Geektard "Cliff Claven" loudmouth know-it-all and the cat-piss social dipshit have passed before my senses, but not so much since I stopped going to Cons and hanging out in gameshops 25 years ago. I ran a recent short lived Star Wars campaigns for an existing group of these types. Bottom of the barrel, I tell you what.

You should have killed his character and taken his stuff!!

I love the "there has to be a logical explanation" delusional character, I think my next D&D character is going to be a contemporary "real life" professional skeptic trapped in fantasy land!

In fairness we haven't heard his depiction of you.

For sure try to get a group together, but away from the store. Playing at a shop (or con table), in the middle of the day, just doesn't sound like the way to get the most from the game.

Try and get the campaign going at a private residence at night, and avoid the game ruiner that way.

Brother, we've all encountered these guys. I once gamed in a garage where they kept the pet doberman... the place sure smelled like a dungeon, and the owner smelled like a ogre, how hard-core was that? ;) But the loud-mouth/premadonna/know-it-all is among the worst, right up there with the guy more interested in cracking jokes and talking than actual gaming.