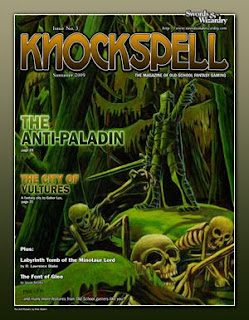 Available from Black Blade Publishing: THE PDF and IN PRINT

It's the highest-level Knockspell magazine ever created, the Wondrous Can of Whoopass, the plate mail of armor classes, and indeed the one thing you MUST NOT DO WITHOUT if you are a serious gamer from the editions that never had decimal points! 1E, 0E, OSRIC, and Labyrinth Lord -- it's all here.

Take a look at the Table of Contents, and you will be convinced beyond all doubt. ----- Unless you make your saving throw, or I have configured the Mythmere's Enthralling Internet spell improperly. (If you roll a 1 and yet don't immediately go buy the magazine, please let me know).

THE TABLE OF CONTENTS:

Nothing from yours truly this time around, but many of my own favorites make a return. Knockspell #3 is also the first issue released through Black Blade Publishing, rather than Lulu. This one could be a milestone issue, people. Pick it up!
Posted by Michael Curtis at 12:06 PM

And let us keep in mind - the fact that Michael didn't have a contribution in this issue is due to Michael, not due to an insufficiency of pleading and large bribes delivered to the proper authorities. :)

All too true. I rolled a "1" on the Knockspell article I had planned to write. I just couldn't breathe any life into the subject and took a pass rather than subject the readership to a dry dissertation on adapting historical sources for game play.

I shall return to this topic at a later date...