Landmarks: Valley of the Stylites 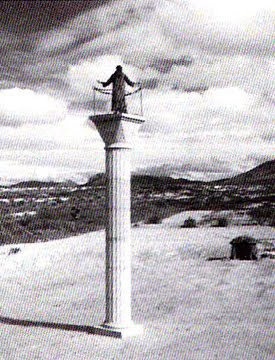 An arid gorge located in the southern tip of the Drast badlands is known as the Valley of the Stylites. On either side of the narrow road that winds its way through the vale are tall stone columns. These pillars are both naturally occurring and hand-carved. Each stands a minimum of 30’ in height and a mere 5’ to 10’ in diameter.

Dwelling atop many of these pillars are the Stylites: ascetics devoted to various deities who’ve given up worldly comforts in order to connect closer with the divine. These men and women are ragged specimens of humanity who rely on offerings provided by pilgrims and devoted local residents for sustenance. Atop their lofty pillars and exposed to the deprivations of weather and the hallucinations born of hunger, the Stylites gain great insights into the mysteries of the cosmos. It is said that when the greatest of sages, priests, and wizards know not the answers you seek, it is best to speak with a Stylite.

However, getting a Stylite to speak is often a difficult task. Many survive their decades-long existence atop their stele by entering deep trance states, while others have long since succumbed to madness. A few have taken vows of silence in addition to their vows of poverty and suffering, sealing the knowledge they’ve gained behind shut lips. Some refuse to answers queries unless the seeker first proves himself worthy of the knowledge. This can lead to philosophical and theological debates that take days to complete.

Despite these impediments, finding a Stylite willing to speak is well-worth the difficulty. Stylites can produce the same results as the 6th level magic-user spell, legend lore, and the subject of their knowledge need not be well-known. The cost of such knowledge is usually a meal’s worth of stale bread and tepid water given to the Stylite to support them for another day. Although the cost is light, adventurers are advised not to seek out the Stylites regularly for information. Their primary obligations are to the gods and those entities become most upset with mortals who insist on vying with them for their servant’s attentions.
Posted by Michael Curtis at 9:01 AM

That could make a really great side trek for a big quest!

Good stuff, source of PC info and RP opportunity all in one. :)

Are you also going to make homeless and assylum lunatics saints? The freak spent decades on top of a pole! Any priest who condones such behavior is endangering the sanity of minors! No wonder you refuse to see the absence of the emperor's missing clothes and keep falling for tyanny.

Are you also going to make homeless and assylum lunatics saints? The freak spent decades on top of a pole! Any priest who condones such behavior is endangering the sanity of minors! No wonder you refuse to see the absence of the emperor's missing clothes and keep falling for tyanny.

This is the best comment I've yet to receive since I started this blog. Thank you very much!