When I was a boy, I was fascinated by dioramas. The idea that the real world could be reproduced in miniature fired my imagination, and museum field trips usually found me pouring over the tiny reenactments of historical events located in those institutions. When my father bought my brother and I a train set, I had considerably more fun making little trees and cliff faces for the table than I did running the train itself. Watching The Lord of the Ring’s special features on the miniature workshop at Weta reminded me of the simple joy I took from seeing the world in a much smaller scale.

I mentioned on Monday that I might have to pursue crazier paths in order to bring my imaginary world to life. That was the preface for this post. In truth, I’ve been playing with the idea of scratch-built miniature terrain for the last two or three weeks, mostly to keep my hands occupied with something other than a cigarette. I picked up a copy of Games Workshops How to Make Wargames Terrain to see if there might be a germ of an idea there. After pricing a few of the needed components and finding them to be much cheaper than I had anticipated, I tried my hand of creating two small pieces, both of which are sites from my campaign world. I’ll let the results speak for themselves in the pictures below.

I readily admit that this is without a doubt the geekiest thing I’ve done in regards to this hobby of ours, but it was very satisfying. The wonder of tiny worlds which I had has a child hadn’t vanished – it was merely slumbering. And while sculpted terrain isn’t the easiest way to reproduce what’s in my head, nor the easiest to transport, there is a visceral reward to being able to place something on the table in front of you and say, “This what you see.” Especially if you’re already using miniatures in the game and can now move them about the three-dimensional shard of your world which has suddenly appeared.

Sculpting these pieces takes some time, but the majority of it was spent waiting for paint or glue to dry overnight. The actual time spent working on them only amounted to two or three hours each. If I was working on two pieces simultaneously instead of consecutively, I figure I could turn out small pieces in fairly short order. All that’s missing right now is the inspiration to make more and the confidence to build larger, both of which will come in time.

Yes, it’s a different way to go and it’s certainly a little daft, but it was a hell of a lot of fun. It could also be something that other artistically inept referees might want to play around with. I might even document my next project and make a “How To” post out of it. 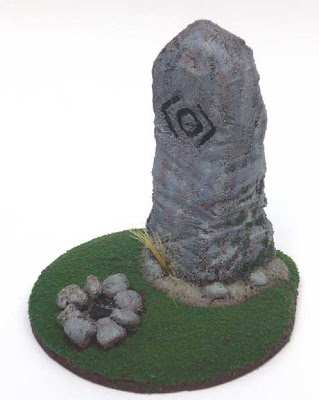 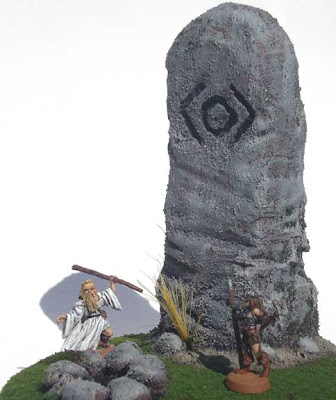 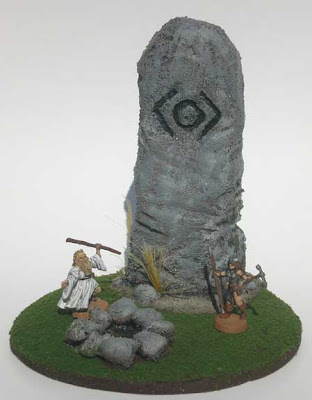 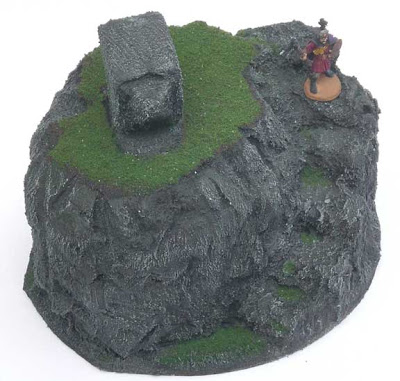 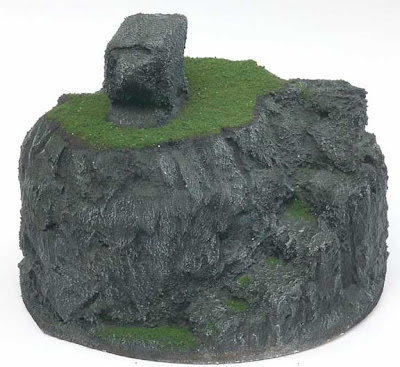 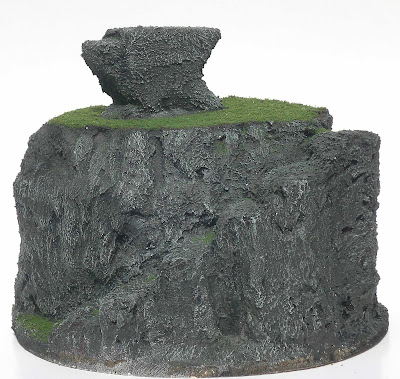 Posted by Michael Curtis at 2:20 PM

Those are both awesome!

I haven't created much terrain, not even for wargames use. But it's something I've always wanted to do.

This might just be the jump-start my imagination needed!

I've made WWII buildings and whatnot myself, but I've never had the inspiration to tackle free-form fantasy pieces like this.

Please do a how-to article!

I use to drool over dioramas when I was a kid as well, but it was the model of the foggy swamp and decrepit house on the hill from the local "Monster Movie Matinee" opening sequence (a Saturday horror/sci-fi movie slot) that really fueled my childhood love for miniature scenery. I think everything I've built for wargames since my intro to that hobby 20 years ago has channeled that haunted diorama. (And I have a lurking feeling that I'm building my way up to creating something like it one day...)

I love your pieces, BTW. It's amazing how easy it is to create good looking, useful miniature terrain. I look forward to seeing what else you come up with.

I think everything I've built for wargames since my intro to that hobby 20 years ago has channeled that haunted diorama.

That reminds me that there's another source for my love of miniature landscape: The Land of the Lost. Watching that show as a kid with all its various miniature backdrops really made a dent in my subconscious. I'd forgotten about the impact that show had on me until I read your post.

Very nice stuff! And you are not alone in your love for the tiny. I once saw a reproduction of the battle of Agincourt in a museum and wow... But oddly enough, one of the coolest miniature settings that I remember was the old Movie Intro for HBO back in the 80's. The one where they do a flyover of a miniature city street, then cruise out into the countryside! It was awesome then, and its awesome today. Don't get me wrong, I love computer generated stuff, too, but it doesn't hold the same charm as something 'tangible'.

I used to do a lot of that. Storage and line of sight issues were the main reasons why I stopped.

I loved being able to put out figurines of trees and huts and such. And because I built everything with the intent that it would be used and manhandled and figures would be put on it, I overengineered everything. Those little huts were sturdy! And seeing these objects snap to the 1-inch grid was pretty cool too.

You should try working with cardboard, masking tape, white glue / spackle mixture, and ballast (like gravel, cat litter, sawdust, etc). You'd be surprised how much you can do with that, how sturdy it is, and how cheap too. You'll never look at a refridgerator box as just another time machine again!

Also check out Terragenesis. Some tutorials, some of the same information as in the GW book. But the inspiration is pretty good.

Looks like you don't need that art department after all! You are doing fine on your own. Those little things look great!

I was also always fascinated by the miniature, and would borrow the houses and stuff from my brother's model trains for my battles, much to his consternation.

I have a number of small huts, houses, etc., all built at ~25mm scale for use with my minis... I tried to make 2 versions of each model, intact and ruined, for battles. If the house gets burnt or smashed by catapult fire, I can replace one model with the ruined version.

Most of them are 'scratch built' from cardboard, paper, gravel, glue, toothpicks, etc., and don't look nearly as nice as your samples.