My regular readers know that I’ve penned the upcoming DCC adventure Emirikol Was Framed! and that it’s due for release later this year. What is not common knowledge is that I’ve written a second adventure and that I’m currently working on a third Dungeon Crawl Classics scenario.

The second adventure is entitled The Sea Queen Escapes! and it’s now in the final stages of revisions and playtesting. The cover art is complete and the book is almost ready to go into layout. No release date or formal announcement has yet been issued, but I have permission to talk a little bit about it. You can hear me say a few words about The Sea Queen on an upcoming episode of Jennisodes, and those of you looking for more details about my DCC work, Stonehell Dungeon, and “Of Unknown Provenance” should tune in once that goes live.

As I mentioned, The Sea Queen Escapes! is undergoing playtesting at the moment by certain select groups. One such group played through the adventure this weekend. Amongst the players at the table was Jim Wampler, the mind and pen behind Marvin the Mage! I’ve mentioned Marvin in the past and Grognardia gives old Marv some wordage as well in this post. If you’re not currently reading Marvin, I suggest you point your browser over to mudpuppycomics.com and catch up on the fun.

One of the unique monsters featured in The Sea Queen Escapes! are the lampreymen, an sea-going race that makes an appearance early on in the aquatic-themed adventure. Jim Wampler, inspired by the party’s run in with these cold-blooded suckers, created a wonderful illustration of them in his own unique comic style. Both Jim and Joseph Goodman gave me their blessings to share Jim’s work with my readership. 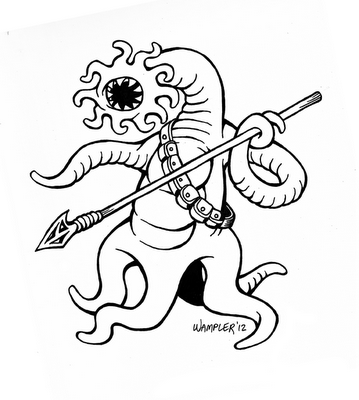 Having no visual artistic talent of my own, it’s always a surprise and an extreme pleasure to see something that existed solely in my head and in written form come to life in an artistic depiction, and Jim’s take on the lampreymen is no exception. I’m digging the bandoleer of pouches this guy’s rockin' as he comes at you with his spear and big old mouth.

Hopefully this small glimpse at just one of the many threats awaiting the PCs inside the cover of The Sea Queen Escaped! “wets” your appetite for more. If you dig this sample of Jim’s work, stop by mudpuppycomics.com for a lot more of his stuff and a lot of laughs to boot!
Posted by Michael Curtis at 2:37 PM

I just did something similar: http://www.digitalorc.blogspot.com/2012/07/lady-lamprey.html