Of Unknown Provenance on IndieGoGo 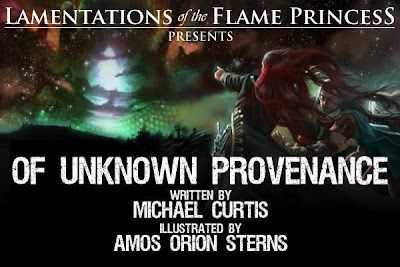 James Raggi has kicked off a campaign to get nineteen adventures for Lamentations of the Flame Princess RPG funded in the month of July. The would-be authors of these works runs the gamut from industry professionals, up-and-comers, and a few wild cards one wouldn’t expect to see lending their names to a roleplaying game supplement.

One of the names that falls somewhere in that range is my own. Provided the funding is achieved, I’ll be writing an adventure entitled “Of Unknown Provenance.” They say write what you know, so I decided to use a forgotten, near-legendary repository of items with intrinsic – as well as pecuniary—value as the adventure’s framing device. It’s also my nod to certain anthology shows like Tales from the Darkside and Friday the 13th: The Series. The teaser is as follows:

In certain occult circles, sorcerers still trade tales of the Night Archive. Known as a repository for artifacts deemed too perplexing or too dangerous for mortal minds to safely comprehend, the Night Archive was a vault of wonders tended by the devoted few who dedicated their lives to the custody of the macabre and inscrutable. But history, like the weird inks that stain arcane grimoires, is prone to fading and the Night Archive slipped into the mists of legend.  Now, as the stellar wheel turns above and the sign of Herthas rises once more, rumors spread that the location of the Night Archive is again known by Man. The fate of its collection and the caretakers charged with its keeping remains a mystery, but for those who deduce the vault’s location, a treasure trove of magic surely lies for the taking…

I’m really looking forward to penning this one, so please, if you’re interested in seeing it brought to life, consider kicking in to help fund the adventure. While you’re doing so, check out the rest of the adventures currently up for funding and see if they also pique you’re interest. Both I and the rest of the authors would be extremely grateful.
Posted by Michael Curtis at 2:26 AM

That sounds great! You, of course, have to include a red-head npc with big, poofy hair.