Into the whirlpool
Where matter vanishes
Degenerate star
Arm of Orion

Now that visitors know what to expect once they arrive in the Uncertain Lands, how exactly do they get there? For this, we must turn to the sages of the ages, who, in their ink-spattered wisdom, have determined that there are four known methods of transportation between the Kinan-M’Nath and other worlds.

Method #1 – Spell Craft: Perhaps the easiest method of world travel, this method is restricted to those who have achieved mastery in magic, have discovered a magic item capable of cross-world travel, or can pay someone to provide these means of travel for them. In general, spell craft travel covers cross-world travel achieved by use of astral projection, gate, limited wish, plane shift, and/or wish, or through magic items such as an amulet of the planes, a cubic gate, or a well of many worlds. The benefit of this method is that the caster or item user has some control over where they arrive—provided they have some familiarity with the lands of the Kinan-M’Nath.

Method #2 – Realm Storms: Highly unpredictable, those arriving in the Kinan-M’Nath by way of a realm storm seldom do so willingly. These planar tempests tear the boundaries between worlds, although they appear to be nothing more than extremely strong thunderstorms to those caught in them. More than one party of adventurers has sought shelter in a cave during a realm storm only to emerge after it ended and find themselves in a completely different world. Some powerful mages and learned sages can predict where and when a realm storm may next appear, but finding such an individual and meeting their price is an adventure in its own right.

Method #3 – Etheric Mists: Like realm storms, etheric mists are a supernatural event. They are even more unpredictable than the storms, however, and some sages believe that etheric mists are examples of Fate in action. Appearing as a smoky gray fog, etheric mists are cold, thick, and damp, restricting sight to a mere 5’. Alien noises and weird echoes sound from the depths of the mist, and an occasional phantasmagorical shape can be barely discerned. Etheric mists appear without warning, even on the sunniest of days. They envelop travelers completely, last anywhere from several minutes to several hours, and, once they dissipate, leave the wanderers in a new land. 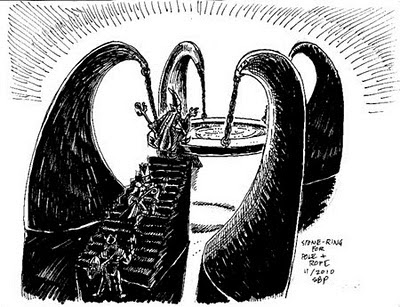 Method #4 – Hangways: These permanent gates were created in the dim past by unknown hands for indeterminable purposes. Appearing as 12’ diameter stone hoops, hangways are typically found suspended horizontally between four massive supports and dangling 10’-12’ above the ground. Usually a set of free-standing stairs or a ramp leads up to the edge of the hoop, allowing travelers easy access to the 8’ diameter opening in the hoop’s center. The air inside this aperture shimmers as if hot, although the temperature is the same as the surrounding atmosphere. Although hangways share the same general appearance of horizontal hoop hanging from supports, details vary from place to place and world to world. 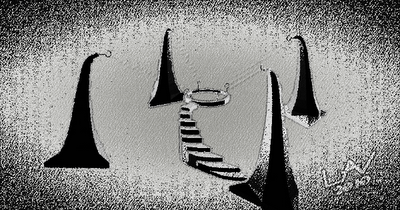 Hangways, sometimes called “hopgates” due to their method of egress, allow free travel between worlds to specific locations. Unlike the less predictable methods listed above, hangways remain in fixed locations and provide access to a matched site on one or more alien worlds. Use of the hangway is a simple matter of hopping through the horizontal aperture and falling between worlds. The traveler lands unharmed on the floor underneath the other hangway’s matched hoop on a new world. Travel between world can only occur by stepping through the topside of the hangway’s hoop. Attempts to reenter a hangway from below are always unsuccessful. 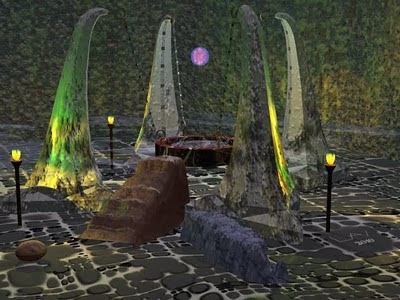 While the majority of hangways are keyed to a single location, some allow access to multiple planes. Hangways with multiple connections are usually time-based, meaning that a single hopgate will connect to one place during a certain time of the day, week, month, or year, and connect to another at an alternate time. Sometimes manuals, instructions, carvings, etc. are found near these types of hangways, but this is not guaranteed. Adventurers intending to travel via hangways should research their chosen hopgate carefully before embarking on their journey.

Hangways are the most common planar gate found in the Kinan-M’Nath. At least two are known to exist within the boundaries of Stonehell Dungeon; others can be found in forgotten places (both indoors and out) across the Uncertain Lands. The most recent wayfarers to arrive through a functioning hopgate are the members of The Society of Planewalkers, currently operating out of Blackpool. These outsiders purportedly originated in the Lands of the Rotted Moon and have displayed talents and traits unusual to the Kinan-M’Nath. Whether they will become a force for the Weal or the Woe remains to be seen.

A Note About the Duration of Stay: Visitors to the Kinan-M’Nath should be aware that their method of travel to the Uncertain Lands may have an impact on how long they remain in that world. Etheric mists and realm storms are notorious for carrying a person or persons between worlds only to return them to their place of origin days, even hours, later. And while spell craft and hangways almost always allow for unlimited visitation, even these methods have been known to abruptly fail, resulting in the traveler’s sudden departure from this realm. In other words, the referee has full control over the length anyone visits his campaign, making it much easier for a guest PC to suddenly fade away and return to his own campaign world if needed at the end of a session.

A very, very heartfelt thanks to Stefan Poag and Talysman for taking the time to contribute their talents to an unconventional idea dreamed up by me on a whim. Your contributions are greatly appreciated!

The hangway notion is pretty neat. I'd like to stick one in my megadungeon - multiple interconnected megadungeons (Stonehell, and who knows where else) is a really neat idea.

I'll be publishing my megadungeon (first level in January), so I won't just go and do it, that would be wrong. Instead I'm humbly begging your permission to do so.

Pat, I have no problem with you including a hangway in your dungeon. Just be aware that the art included in this post is property of its respective artists and cannot be used without their permission.

The hangway concept itself is all mine, however, and you can place on in your megadungeon. Just throw me a credit somewhere for its design. Best of luck to you!

That pretty much goes for anyone wishing to add a hangway to their own work. And, ff course, you can include as many as you want in your home games without need to credit me.

That's why you're a better man than me - I would insist that people ESPECIALLY credit me in their home games, with a 10 minute period of praise before each game session.

As the premier megadungeon guy, you could probably push the concept even further. A virtual network of megadungeons, with hangways at certain levels (so 3rd level of Wonkaland doesn't have to run into 12th level of Neverendingzombiedungeon). Then toss up a "Hangway Enabled" logo or something that people can stick onto their megadungeons products.

This is so interesting, and I love the hangways concept! Thanks for putting this out there!

Per your picture on posted on Nov 26th, the hangway needs a 100' diameter circle, with some margin to walk around it. I've found an appropriate spot on my third level map to plop it in, a deserted beach along an underground lake.

Since the hangways would be used to visit the megadungeon, access to compelling points of interest is probably important. I might make sure that access to the next levels up and down is reasonably close. Then again I might not. Have to chew that over.

Per your picture on posted on Nov 26th, the hangway needs a 100' diameter circle, with some margin to walk around it.

That sketch was more of a concept piece rather than an exact floorplan. Feel free to resize the hopgate if you need to.

Talysman did a geomorph using the hangway that is available here should you need some more inspiration.