If you’ve been following the progress of my Labyrinth Lord campaign, you know that hobgoblins are the current “big bad” of the dungeon. Prior to the missions against the hobgoblin redoubt, I discovered that I was grossly lacking in hobgoblin miniatures. I made one attempt to solve this by making a lowball bid on a slew of WotC’s pre-painted hobgoblin minis on eBay, but someone wanted them more than I did. As a result, I decided to go for quality over quantity and made my very first purchase of Otherworld Miniatures, namely Hobgoblin Warriors I. A lot of good things have been written about Otherworld’s metal and I can say that I heartily agree with those statements. It might be my imagination, but the pieces felt heftier than your average metal mini. I was very impressed with my hobs—enough that I purchased another two sets (Hobgoblin Warriors IV and Hobgoblin Guards I) to bring my total number of orange-toned Asian goblins up to eight, which should be enough to carry me through most encounters (although the Hobgoblin Command Pack looks pretty sweet and it’s hard to resist).

These guys have shown up in the background of certain photos and video from the game sessions, but I thought they’re worth a closer look. The camera work is a little shoddy, but I pretty pleased how they came out—especially since painting minis is a fairly new activity for me. 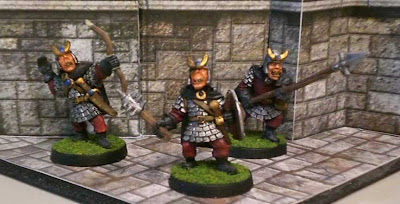 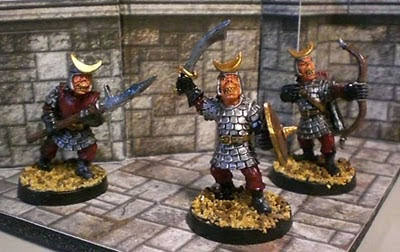 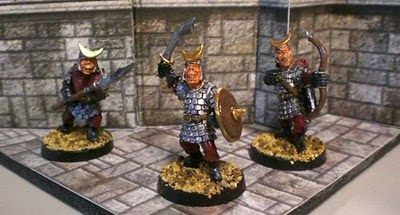 While Otherworld’s pieces make them, in my opinion, the go-to source for new classic miniatures, there are of course other manufacturers out there. In my own game, Mars Markus is portrayed by a Mega Minis Guthrie Grenadier recast, for example. Nevertheless, I wanted to make a case for Center Stage Miniatures. Center Stage went through a bad patch a little while back when its owner left the business in less than capable hands while he was undergoing military instruction. He came home to find the business in ruins and has been doing his best to rebuild goodwill and make right all that went wrong. Originally, Center Stage was to do a line of official Swords & Wizardry minis, but that’s no longer to be now that S&W is moving in other directions with new partners. The S&W line has been, ahem, “recast” as Fantasy Encounters. Fantasy Encounters are all 25mm pieces from molds that were manufactured “back in the day” and are again available at good prices.

I did business with Center Stage before the whole kurfluffle and my interaction with them was nothing but professional and satisfactory. I would do business with them again in future should their pieces again meet my needs. I’d likely wait until I needed several minis and go for the flat shipping rate to make the most of my savings. You can check out their renewed website at centerstageminis.com.

The two pieces I purchased were Evil Cleric and the just returning Evil Champion W/Runesword. You can see my efforts to bring them to life below. 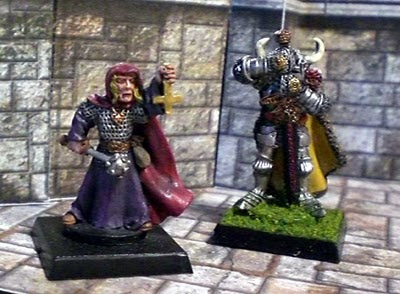 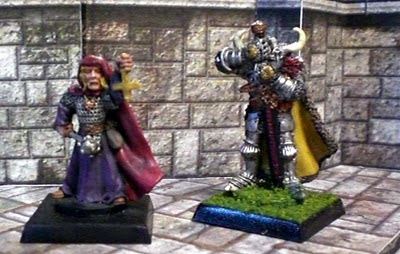 The OSR has been largely synonymous with retro-clones and new adventures compatible with old editions, but let’s not forget that there can be more to these games than just the books and dice. Companies like Otherworld and Center Stage are making it easy for those of us who couldn’t afford a Grenadier boxed set back in the day to nevertheless acquire some pretty cool, classic-looking pieces and I, for one, am extremely grateful for that.
Posted by Michael Curtis at 6:31 PM

Holy crap, I need one of those upsidedown cross clerics!

He is pretty sweet. I really should find an excuse to throw another evil cleric into the mix...

Those Hobgoblins look very good, I think you did a great job painting them. I really want to get some the Otherworld Orcs...and pretty much everything else they make. I'll start with the Orcs, especially after hearing that the Hobgoblins have some heft to them.

I picked up a few sets of Otherworld miniatures (orcs, goblins, wererats, rust monsters, and the idol) but have yet to paint any of them. They really are fantastic miniatures.