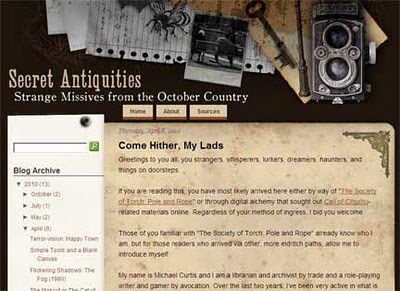 I’ve been very neglectful of my tertiary web project, Secret Antiquities, as of late. I’ve been more concerned with getting projects finished, running Watchfires & Thrones, and playing in the radiation for next year’s Gamma World campaign. It is October, however, a month that has historically been one of great creativity for me and an all-around enjoyable time of year.

To celebrate October and to train myself to be more attentive to my weird history project, I’ve challenged myself to make thirty-one posts over on Secret Antiquities between now and Halloween. I’m trying to formulate some parameters for my planed GORE project in 2011 and I need to flail about wildly for a bit to find where my creative boundaries lie. Therefore, what will be appearing over on that blog is a potpourri of strange ideas, intellectual artifacts, and dream relics come to light. I can’t promise everyone’s going to be a Maserati of creativity, but hopefully the signal-to-noise ration won’t suck too badly.
Stop on by if this sort of thing sounds like your cup of ichor.
Posted by Michael Curtis at 10:01 AM

It is a great idea to set yourself a real target, i'll be sure to check it out, i am looking forward to seeing what weird and wonderful things you are coming up with!