Can Anyone Identify This Brand of Graph Paper?

I'm in the middle of my first cold of the season and it's keeping me from the work I'd like to be doing. Instead, I'm nursing a strange obsession that I can't seem to satisfy. I'm hoping somebody out there might be able to help. It's a long shot, but here goes:

I have had a pad of a certain brand of graph paper for more than twenty years. Many of my earliest maps were drawn out on this type of paper (my version of Ashabenford being one of them) and it has served me well. The problem is that I'm just about out. For pure nostalgia's sake, I would love to get my hands on another tablet of the stuff. Unfortunately, the few pieces I have remaining have no brand identification marks and I have no idea where I bought the stuff back in '80-something. My search online has turned up nothing as I have little to work with.

I've attached a few photos below of the paper. It is double-sided with 10 squares to the inch on one side and 20 squares to the inch on the other. It features a .75 inch margin around its long edges and a .5 inch one at top and bottom. I have only seen one other person with this stuff in my life, and they too bought it a long time ago. The manufacturer might be long gone, but if it's not, I'm hoping that someone out there can either recognize it by sight or has their own stock of the stuff with a brand name still on it.

Does this look familiar to anybody?

UPDATE: The paper has been identified as Armory 1/10" x 1/20" Graph Paper. A very special thanks to Allan Grohe for confirming the identity of the stuff and thereby explaining why most people who have if bought it twenty years ago. Looks like I've got some auction trolling to do if I want another pad of the stuff. 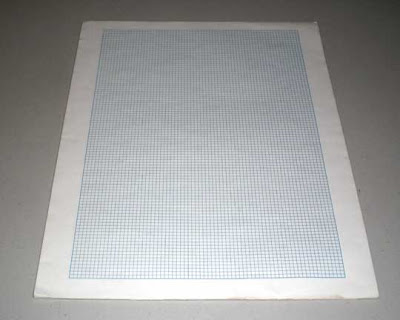 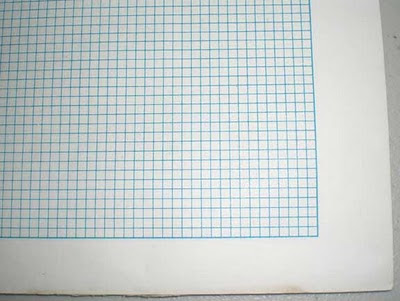 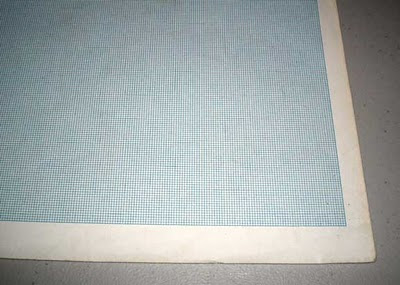 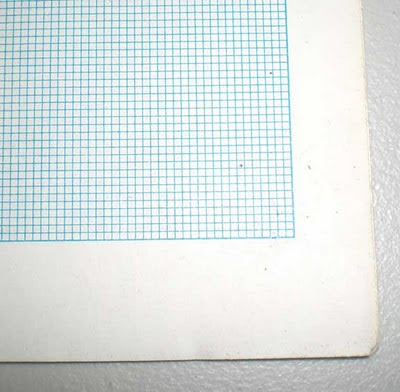 Posted by Michael Curtis at 6:15 PM

Ah the search for lost graph-paper vendors. I can't help you but have had a similar problem of my own. My work place used to stock these odd-ball 14 x 17 sheets with, get this, 6 squares to the inch...

It looks familiar, from BitD, but I don't know.
--However, I suggest scanning and saving each side so you can print out copies, or use them as a layer in PS, etc.

I suggest scanning and saving each side so you can print out copies, or use them as a layer in PS, etc.

That's the inevitable solution should it no longer be available. I've got an old fashioned streak though and nothing compares to a real tablet of the stuff. So I'm hoping somebody out there can ID it.

Sadly, can't ID. However, there are a couple of websites out there which let you generate a reproduction as a PDF, which you can then print. You can tell it how many squares/inch, set the margins, etc. I've made some lovely blue graph paper very similar to that.

From what I can tell, paper with 10 & 20 squares to the inch is often used for designing needlepoint patterns and quilting.

Perhaps you could check at that sort of store for the pads you are looking for.

I used the EXACT same paper to map this Sunday. i grabbed it from a pad at the hosts place. I'll check out what is on the pad cover at the next Sunday sesh.

Michael, I used to buy paper like that (only larger) at art stores in the loose paper drawers(?) Maybe that could be a place to start searching? Good luck!

From what I can tell, paper with 10 & 20 squares to the inch is often used for designing needlepoint patterns and quilting.

I had an inkling it might be a specialty paper since it looks like nothing one normally sees. Thanks for the suggestion; it may help.

I used the EXACT same paper to map this Sunday. i grabbed it from a pad at the hosts place. I'll check out what is on the pad cover at the next Sunday sesh.

That would be most appreciated! I figured it was a long shot to ask blindly, but it looks like it might have paid off. I look forward to your reply!

I used to be able to buy hole-punched sheets of 10 to the inch, but with canada going all metric, its nearly impossible to find now.

My recollection is vague... I can't remember the company, but I think it came wrapped in plastic with a sticker on the front. Did the logo have a line drawing of a castle...?

I remember picking the wrapped pad of paper out of a rack filled with TSR and third party modules...

Sorry I can't remember, but if you're feeling experimental, check this out.

I have half a pad of the same paper myself, owned it for almost 20 years, bought it at ICON long ago - and no idea the brand. :(

Well, maybe not. It just looks like tracing paper. Sorry.

I have a pad at home that is not that size but sounds very similar. The cover of the pad listed the other sizes available, and IIRC there is another cover sheet at the bottom of the pad. I've had it for 25 years or so. I'll look tonight.

I've got a few sheets of that stuff. No idea where it came from though, I got it 30 years ago. I like that it doesn't have bold lines at every inch, but I'm not a fan of the big white border.

I just wanted to thank everyone whose been chiming in here with suggestions or to confirm that I'm not the only person who had/has this type of paper.

I'm not so much looking to replicate the size or square/inch ratio as I am simply trying to see if I can buy more of this actual paper. Thus a manufacturer's name is my true goal.

Since almost everyone who has mentioned they have or had the stuff attaches a 20 or 30 year old time frame to their recollections, I'm doubtful that the real stuff is going to be easy to replace, but I remain optimistic. Hoepfully those of you who are waiting to regain access to their own stuff will have some good news in the near future.

The double-sided paper with blue ink sounds like The Armory to me: I have several sets of hex paper in a similiar style, but will do some digging to see if they did their graph paper in those sizes too.

That's the stuff alright, Allan. You can tell by looking at the folded corner at the bottom of the image on Noble Knight's page for it.

And, of course, it's sold out.

Thank you, though, oh master of role-playing esoterica. I should have simply asked you from the start! Now I have it identified and know what to start trolling for on auction and out-of-print sites.

A thousand blessings on your house, grodog!

Thank you, though, oh master of role-playing esoterica. I should have simply asked you from the start! Now I have it identified and know what to start trolling for on auction and out-of-print sites.

A thousand blessings on your house, grodog!

You're quite welcome, Michael. I may have a spare pad of this stuff upstairs, if you're not able to dig another source up.

Ah, forgot to check. But my pad is The Armory as well. Loved that stuff.

I second the use of http://incompetech.com/graphpaper/square.html or just search for graph paper in google and you'll find sites that you can customize to your hearts content and will be able to recreate that paper without having to go to ebay or pay out the wah-zoo! I'm using incompetech paper for all my graphical needs in pathfinder/dnd!