Radioactive Theatre: The Blood of Heroes 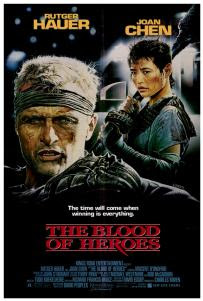 To occasionally prove that the entertainment industry isn’t completely creatively bankrupt, someone proposes that the mixing of two or more genres into a never before seen mashup is precisely what today’s jaded audience is clamoring for. This can lead into strange territory. Some of these mixes look bizarre on paper—“science fiction plus haunted house” or” buddy comedy meets zombie movie”—yet the results (Alien, Shaun of the Dead) speak for themselves. Other mashups aren’t quite so successful—"Cop Rock", for instance—but at least somebody gave it a go.

Amongst the weird bedfellows these genre mashups have produced, none is quite as weird as our next installment of Radioactive Theatre, The Blood of Heroes. This film is the only entry in the genre of “post-apocalyptic sports drama,” although I suspect its inspirational pedigree can be traced to such fare as Rollerball or Knightriders. Whatever its creative font, it does seem to have more in common with something you hallucinated during a particularly nasty case of the flu than actual cinema. Luckily for us, this is not the case. It does exist and even features genre film favorite, “Root beer” Hauer.

Here is the obligatory spoiler warning, but I bet you can guess how it ends simply by knowing it’s a sport drama film. Continue to read at your own risk. 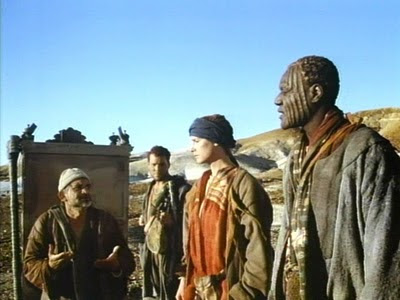 The thumbnail synopsis: In the years after Armageddon, mankind sorely misses football (of either variety) and decides to make do with what’s on hand. Being that this is after the apocalypse, what's on hand is an endless supply of dog skulls, spikes, and surplus sports padding. Thus "The Game" is born. Consisting of two teams trying to stick said dog skull on the other side’s spike, "The Game" is the only diversion available in a world so backward that full grown armoires are considered to be reasonable replacements for backpacks. "The Game" is popular from the Nine Cities—underground metropolises where the rich dine of Komodo dragon—to the outlying “dog towns” that apparently meet the apocalypse’s need for dead bamboo.

Against this evocative canvas we meet Sallow (Hauer), a disgraced professional “jugger” (or player of The Game--hate the Game, not the player, baby) that’s been banished to the dog towns for his youthful indiscretions with one of the nobles of the Nine Cities’ wife. He travels from town to town taking on the local teams with his assortment of bush league juggers (which include Vincent Philip D’Onofrio fresh off his success in Full Metal Jacket). In one of these towns lives Kidda (a young Joan Chen, seen here just before her move to the quiet town of Twin Peaks). Kidda dreams of being a professional jugger, living the high life as a “qwik” (the speedy bastard whose job it is to put the skull on spike) in the Nine Cities. When Sallow and his band come to Kidda’s town, she plays for the home team and brutally decimates Sallow’s qwik, ensuring a place on his team when they split town.

What follows is the usual sports montage of Kidda earning her place on Sallow’s team and watching them take on all comers in the dog towns of the post-apocalyptic future (which looks unsurprisingly like Australia—go figure). Eventually, Kidda and Young Gar (D’Onofrio) grow tired of playing in the bush league and convince Sallow to take the team to the Nine Cities so that they can prove their competitive worth and live the luxurious life of pro juggers. After some hemming and hawing, the team does just that—with predictable results (it is a sports drama after all).

The Blood of Heroes is not high cinema by any means. In fact, when you break it down into its component parts, it’s not even good cinema. The sports drama plot is a by-the-numbers story, one you’ve seen a hundred times before. The post-apocalyptic elements are limited to sandy backdrops, ragged clothing, and the usual rusty and battered props all such films are required to have. Nevertheless, the film somehow manages to become more than a sum of its parts, combining two so-so examples of genres to become an entertaining and somewhat guilty diversion. Hauer, D’Onofrio, and Chen bring workman-like performances to the material, which is better than most apocalyptic fare from this era can claim credit for having, but one can see nobody was mistaking this for capital-A “Art.”

The movie’s most mysterious legacy is that it has an odd effect on certain personalities. Some people, after watching this movie for the first, fifth, or five hundredth time, get the overwhelming urge to actually play “The Game” for real. What’s even more mysterious (and somewhat disturbing) is that these individuals find one another and form actual leagues. But it takes all types to make the world go ‘round, neh?

But since we’re not here to perform film criticism or pass judgment on people’s pastimes, let’s see what there is to steal from The Blood of Heroes for use in my inevitable Gamma World game, shall we?

The short answer is, unfortunately, “Not a lot.” The thrust of the movie concerns “The Game” and its associated rules, regulations, and emotional baggage—which is to be expected from a sports drama. I am a referee who likes games within my games, but “The Game” just doesn’t do it for me. If I’m going to cram a post-apocalyptic sport diversion into my game, I’m either going to Thunderdome/maze from Spacehunter route or bring back Aztec handball. Hyped-up football just isn’t my bag.

The subterranean Nine Cities has some charm, especially the fact that they seem to be located so deep under the earth that it’s considered de rigueur to catch a nap while waiting for the elevator to reach bottom. The strict class system of the cities is predictable, but always makes for good role-playing opportunities. The movie’s take on hotels after Armageddon is entertaining and good for campaign color, making it an interesting if not required tidbit to steal.

The Blood of Heroes simply doesn’t lend much of itself to my vision of Gamma World, but that’s largely due to the fact that it’s an example of sports drama at heart and not a post-apocalyptic one. The trappings all scream post-Armageddon, but the real meat of the tale has more in common with The Bad News Bears than Bartertown, making it less than ideal for my purposes. That doesn’t mean it can’t continue to serve as a guilty pleasure on a rainy Sunday afternoon.

Next time on Radioactive Theatre: We’ll either get Mad Max Beyond Thunderdome out of the way or take a quick trip over to New Zealand to listen in on The Quiet Earth. Until then, here’s hoping your rad count stays low.
Posted by Michael Curtis at 11:41 AM

Any chance you'll review SHE?

I'm assuming you mean this She and not the Hammer film by the same name?

To be honest, all my insperational viewing is based solely on what I can get from local library or what my Mom & Pop video store has on its shelves. I can't rule out a review of She for suitable Gamma World use, but it'll have to come to me. I'll see if I can get my hands on a copy in a no fuss manner.

I am thrilled. THRILLED. That there are actual people out there forming Jugger leagues. Not that I'd get within' 100 feet of a game, but still.

When freak flags are flown so proudly I can't help but stand up and salute.

The Blood of Heroes is one of my all-time favorite films. I've owned it in multiple forms for many years. From a writing perspective I find it fantastic, especially the subtext of what is NOT said about the particular world in which the people of the film live.

I could wax on about it for many pages and maybe I will on my own blog, but suffice is to say I consider a lot of sheer genius, and can see how this particular screenwriter would go on to win an Oscar for his also brilliant writing in Unforgiven.

I read an interview in which Joan Chen said this was her favorite film role.

I love this movie! But I'm a huge Rutger Hauer fan. I didn't realize D'Nofrio was in this. He keeps popping up in a lot of different movies I like.

I was referring to the trashy 80s B-movie starring Sandahl Bergman. It's pretty terrible, but definitely doesn't lack in the post-apoc craziness department:

This is a movie that depicts a future in which pre-war breakfast cereals are apparently a form of currency. Where roving bandits in swastika-festooned football gear and warriors in cast-off tae kwon do workout outfits roam the forests of Northern California. Where a woman who has declared herself a goddess battles a robotic Frankenstein's monster in an old warehouse in order to get to a pool of healing water.

If you have Netflix, it's available to watch instantly.

I was about to complain about your "only entry in the genre of post-apocalyptic sports drama" comment, and point to another Rutger Hauer film in the same genre called Salute of the Jugger, but as I read on I realised it's the same film!

The Quiet Earth is a great film. They used to show it here on BBC2 at about 6pm every so often.