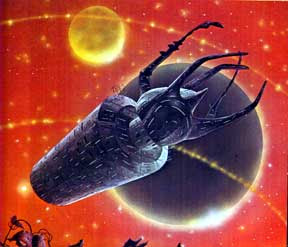 Several decades ago, the Cosmic Imperium developed a problem— a sanitation problem to be precise. With over ten thousand world under its control, the Empire was fast running out of places to deposit the massive amounts of refuse its worlds created. With all of the Imperial trash worlds reaching capacity, hundreds of scout crafts and garbage scows were dispatched to the ends of the galaxy, each with orders to find new dumping planets to handle Imperial sanitation levels.

At the farthest reaches of the galaxy, in the nearly forgotten flyspeck of a solar system designated SK-FG, the garbage scow I.S.S. Molly Hammer came across a planet known only as M262 on the Imperial star charts. Initial scans of the planet detected the presence of massive amounts of hard radiation and most of the world’s surface was wasteland—with the exception of a small 3 x 4 mile island whose sole feature was a crumbling stone castle set amidst lush greenery. Assuming the castle to be ancient remains from a pre-cataclysmic age, the Molly Hammer began preparations to redesignate M262 an Imperial trash heap.

As the scow laid out its primary markers, the ship’s LIDAR chirped to life, indicating a human-sized, unidentified object rising from the castle and heading on a direct course for the Molly Hammer. Once in visual range, the bridge’s view screen revealed this object to be a skeletal figured dressed in rotting robes and seemingly flying without any visible means of propulsion!

Attempts to establish communications with the figure were unsuccessful, but, to the command crew’s surprise, they suddenly found themselves in telepathic contact with the flying skeleton. The robed form identified himself as Waldorf, Overlord Supreme of Planet Waldorf, and decreed that the scow was in violation of Waldorfian airspace. Furthermore, the bony warlord pronounced, the penalty for committing such a gross transgression against the Overlord Supreme was instant death.
Upon passing this grim sentence, Waldorf the Flying Skeleton made several passes with his hands and bolts of lightning and blasts of fire streaked from his fingertips to impact on the Molly Hammer’s forward defense screen. The captain looked at his first officer and sighed. His first officer looked at the helmsman and nodded. The helmsman pressed a button on his console and the Hammer’s three-terawatt maser incinerated Waldorf, Overlord Supreme of Planet Waldorf.
With the question of planetary ownership resolved, M262 became the first of the latest wave of Imperial trash heaps, with unmanned ships making regular circuits to waste world. Unfortunately, one of these drone ships carried more than mere trash in its hold. A clan of Waaj had stowed away as well.
The Waaj are nuisance race. Standing an average of one Imperial meter in height, with only their glowing eyes visible in the depths of their traditional scarlet robes, Waaj clans crisscross the galaxy, selling second-hand technologies to primitive worlds. Since most of their clientele have never seen high-tech devices and are easily impressed, the Waaj save on costs by providing their naïve customers with refurbished tools scavenged from trash heaps and waste worlds. The Waaj stowaways had been in the process of searching the drone ship’s hold for choice pickings when the ship lifted off for M262, trapping them onboard.
Upon arrival at M262, the drone ship dumped it cargo of trash along with the inadvertent Waaj stowaways. The Waaj, being a highly adaptable and near-indestructible race, were unbothered by the planet’s high radiation levels and promptly claimed the world as their own, naming it “Utinni,” which means “Glorious newfound garden world of riches destined to improve the lot of our people across the galaxy.” If nothing else, Waajese is a compact language.
Once the Waaj began spreading across the face of Utinni, one small band discovered the green island with its crumbling stone castle. Always on the lookout for good junk, these Waaj found that the ancient stronghold held a bizarre collection of knickknacks, gewgaws, and tsotchkes—many of which had the delightful tendency to discharge energy blasts, render its possessor invisible, or make it wearer impervious the harm. Most impressive, however, was the glowing stone ring that lay in the castle’s deepest sublevel. After much experimentation, the Waaj learned that by the manipulation of certain levers, dials, and switches, the ring could be made to function as a portal to other worlds, many of which were grossly impoverish when it came to technology, but extremely rich with precious metals, gemstones, and weird curios.
Since that time, Waaj merchants have travelled to worlds formerly undreamt off, trading high-tech tools of questionable provenance and predictability for mineral and magical wealth. These tiny traders appear without warning, make as many deals as possible before their merchandise breaks down, then vanish back through a magic portal to Utinni, where they restock and start the process anew on some new world. Occasionally the Waaj will set up mercantile outposts in large population centers, provided that their customer turnover is brisk enough for them to sell the goods to successive waves of gullible buyers.
Still rarer are the subterranean bazaars that some Waaj have established in dungeons and other hazardous underground locales. In these dim marketplaces, Waaj dealers make money hand over robed fist by selling unpredictable wares to rival humanoid tribes and iterant adventurers alike. More than one dungeon-delver has avoided certain death thanks to the strange device he purchased from a Waaj salesman, but many more adventurers have inadvertently destroyed themselves with some faulty piece of high technology. When dealing with the Waaj, caveat emptor…
Posted by Michael Curtis at 9:01 AM

Awesome stuff! You've inspired another whimsical element to my games.

(BTW, why said efficient Imperial bureaucracy wouldn't just shoot the garbage into stars is beyond me...)

BTW, why said efficient Imperial bureaucracy wouldn't just shoot the garbage into stars is beyond me...

Self-preservation. On the off chance The Dread God-Emperor accidentally throws away the keys to his hover-dreadnaught, Imperial underlings want to be able to comb planets rather than the infinity of space in order to find them.

Ahahaah!! Said underlings don't like the thought of the Pain-Booth-of-a-Thousand-Agonies?

What about the gods working in the salt mine under the castle?

What about the gods working in the salt mine under the castle?

Simple. With the destruction of all their worshipers, there was no one left to believe in the gods, so they simply faded away. Something Waldorf never considered in his hubris.

Thanks for that great and almost completely forgotten bit of Dragon Magazine goodness.

LOL, so sad that such a iconic legend comes to such an inglorious end...well maybe...

Hey Michael, this doesn't have anything to do with this blog...but very cool btw, but wanted to give you the heads up of a short review in Realms of Fantasy magazine of Dungeon Alphabet. Wasn't sure if you saw it or not.

This is great - a conflagration of Lucas and Leiber! (at least, my mind jumped to the Fafhrd and Grey Mouser story, the name of which escapes me, where some beings pop through a portal and try to unload a whole ton of junk on the unsuspecting populace)

That picture! It was from some book of starships I had as a kid! That picture was at Barnard's Star!

What book was that? There was also a giant Space Cerberus German Shepherd in it, right?

Dear lord that's awesome! Did you find what you were looking for for the minis?

What book was that? There was also a giant Space Cerberus German Shepherd in it, right?

It's from Spacecraft:2000-2100, part of the Terran Trade Authority series.

No Space German Sheperds in that book, however. Maybe in of the sequels though, which I've never seen.

Did you find what you were looking for for the minis?

Not metal ones, but I knew it was a long shot. I've picked up a few of the cheapy plastic ones and I'm going to see if I can repurpose them for my own uses.

Have you tried The Miniatures Page Sci-Fi Marketplace? There aren't any Jawas for sale right now, but you can inquire to previous sellers and perhaps put up a "wanted" ad.

HoL, Waldorf and Jawas. It's like a triple-tiered nerd cake iced with refined WIN!

Type in "Jawa". May need to hit the next button.

The Space German Shepherd was in Spacewrecks.

It's all coming back to me now.

A full-scale ship model made entirely of macaroni, right? That was something mentioned about a third of the way into the book, I think.