It's times like these that I'm glad I don't worry too much about realistic simulation in role-playing games.

I've been detailing my hexmap sandbox and I've got a few fens and marshes to fill. Normally, this would call for beasts like alligators or crocodiles to help round out the list of "things likely to eat the adventurers." However, my map is located on a part of R'Nis' surface that stretches between 41° and 44° latitude--a climate not usually very gator friendly.

If I was worried about rationalism and realism, I couldn't just slap fur coats on them and move them into my swamps now, could I? 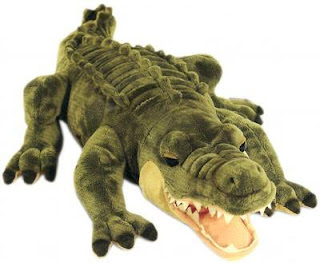 This species of alligator is similar to its common cousin with one exception: the thick patches of wool-like fur that cover its scaly body. This fur and the creature’s fast metabolism allow it to range further north than its sub-tropical relative and specimens have been found as far as 43° latitude. A woolly gator’s fur also acts as a superior form of camouflage. This fur collects algae and stray water plants, forming a mat of greenery that disguised the gator in its surroundings. When amongst similar plant growth, woolly gators surprise their prey on a 1-3 in 6.
Posted by Michael Curtis at 2:18 PM

I keep seeing that and reading "Wally Gator".

You may need to start an account to access this. The pic alone is worth it and totally on-topic.

I love it. You should get one of those plushies to drop on the table when your party is trudging through the cold fens...

"You've been surprised by a woolygator!"

That would be quite surprising. With the whole argument for dinosaurs evolving into birds, perhaps a reptile with a thick insulating plumage might also be appropriate, cf. the classic owlbear?

That is just too perfect...a little spooky too. Thanks for pointing me to that link! I'm stealing that picture straight away.