This is the first of an occasional series that looks behind the scenes at the creation of Stonehell Dungeon. Because some of you have expressed an interest in hearing some of the anecdotes and design choices that went into writing the megadungeon, I’ve decided to sporadically post about them here on the blog. I will attempt to avoid any spoilers in these posts by referring to the appropriate parts of the book in only the vaguest of terms. If you have a copy of the book, you should have no problem understanding what aspect of the dungeon I’m talking about. However, if you want to be absolutely certain to remain uninitiated into Stonehell’s secrets, just avoid any post with the “Secrets of Stonehell” header.

Some of these related anecdotes will be short and sweet; others will require a bit more text to relate. While not all of them may be especially interesting to everyone, I will attempt to stick to only telling tales that I think have some entertainment value. If you’re the type of person who likes Easter eggs or delights in the reason why the phrase “Stop her, she’s got Mike’s keyboard,” is so funny, this series of posts is for you. And to start things off, I’d like to tell you the story behind Coal the bear.

On September 14th, 2001, just three days after 9/11, I was on one of the first flights out of JFK to start a new phase of my life in California. Having found myself out of a job after the web bubble burst, a producer friend of mine offered me a gig out in Hollywood. I’d lived in L.A. before and knew the city, so, with nothing keeping me on the East Coast, I took him up on the offer.

My first job “on location” in the film industry took me to Auburn, CA, where I spent nine weeks working on a cable movie remake of the TV series, “Gentle Ben.” The film featured Dean Cain and Corbin Bernsen, and, in the role of Ben, an 8 year-old, 600 lbs. black bear named Bonkers.

The shoot itself was a trip. One colleague kept calling those nine weeks in the woods “band camp” with good reason. Despite 14-hour work days, six days a week, the fact that I was standing atop a mountain under a brilliant blue sky for my paycheck was a welcomed change from the previous three years I’d spent in front of a computer monitor. Plus, just like summer camp, plenty of shenanigans ensued to keep the cast and crew entertained during our limited downtime. Not a bad way to earn a paycheck!

The highlight of course was regularly working with a very large bear. Bonkers was a most unusual ursine. He ate ice cream and chicken fingers like a stoned frat boy and had a penchant for jumping up and down in his trailer, resulting in thunderous booms and rattling steel that would occasionally ruin the audio track on a take. Then came the day when it was discovered that we couldn’t legally drop an eleven year-old kid down a mine shaft and onto a bear. The director looked about and, seeing my size, promptly sent me to wardrobe to b 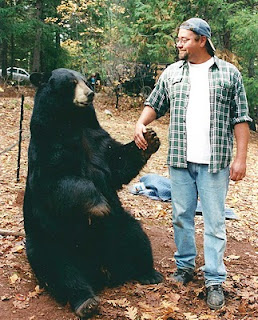 e placed in the bear suit. I spent the latter part of the afternoon crouching next to a crash mat while our child star’s stunt double fell down a mocked-up 10’ pit, “bearly” missing me with each take.

That day was only the first of several which saw me standing in for our loveable bear. Thanks to some method acting and advice from Bonkers' trainers about how to comport myself, I blend seamlessly into the film. You’d never know it was me in the suit. As a reward for my efforts, I was allowed to pose with my co-star one afternoon during lunch. That’s me on the right there.

When it came to writing Stonehell Dungeon, I found the need to include a creature to help diversify the habitat of the surface level. So, as homage to my time in the Sierra Nevada Mountains and my hirsute co-star, Coal was introduced to the dungeon. And, just like his real life counterpart, Coal can seriously mess you up if you’re not careful.

As one side note to my time in Auburn, I was shamefully unaware of the pulp connection that Auburn had and its subsequent role in this hobby of ours. It was only after we had wrapped shooting that I discovered, thanks to the book, Shadows Bend, that Auburn, CA was once home of Clark Ashton Smith. Had I only known at the time, I’d have gladly taken one of my few days off to track down his home and search the hills for his discarded carvings. Perhaps someday I’ll return to Auburn to not only reminisce about the shoot but to follow in Smith’s footsteps.
Posted by Michael Curtis at 12:00 PM

I concur completely. Really cool. I am looking forward to more.

Another "cool" here. Keep them coming. It's neat to get a peak behind the curtain from time to time.

Great post - to be honest I've been getting a bit jaded with your blog, what with all the advertorials recently, but this kind of Director's commentary special feature really grabbed me.

The bear is one of my favorite NPC's in Stonehell. Great post!