Although my pursuit of these was not tenacious and the amount of cash I was willing to spend was set, I’ve nevertheless finally added a complete white box set to my library. 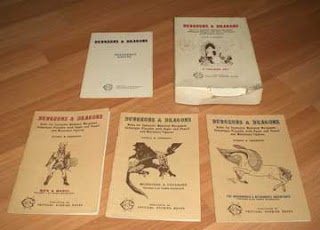 The box has been crunched but the books are all in good condition with only slight staple rust and two penciled-in additions to the text (apparently a previous owner thought clerics got off too easy experience-wise once they hit curate). It’s a sixth printing but I cannot complain too much considering I didn’t have to pay a cent more than I budgeted myself for the set and even the reference sheets are included.

I’ve had the .PDF versions of the books for some time, but they fail in comparison to being able to handle the LBBs in physical form. As someone whose career revolves around the preservation of materials with intrinsic historical value, finally having a set of these books means a great deal to me—not only because I know that at least one set will remain in excellent care but also because ownership of one of these boxes is like the OSR’s secret handshake that grants entrance into some bizarre inner cabal of owners.

Now I'm just waiting on a trio of old school d20s (numbered 0-9 twice) and a set of Zochi high precision, uninked dice coming later this week. I guess it's 1974 again at my house this week. Good stuff indeed.

I have some well-worn sets of dice. I would be willing to send some to you if you want.

I just got done inking a set of my old Gamescience d20s, one side with silver, the other left blank. Never did figure out how I avoided doing it before.

I is cool, though, to have a set of the Little Tan Booklets, right? Maybe we should refer to them as "LTBs" just like Traveller players refer to "LBBs"? :)

In the 80's,at a con, I blew off a chance to buy a pristine wood grain box set of OD&D because at the time, I thought 75 bucks was too much.

Jeeze, re-reading can be embarrassing. Not "I is cool" but "It is cool" - bah!

Actually, the OD&D books are often refereed to as the "3LBB's". Little Brown Books.

Also, for those who might be interested, TheGreyElf (Jason Vey of ZeRFS and S&S) says that this:

Is a match for the original covers on these books.

I have some well-worn sets of dice. I would be willing to send some to you if you want.

I'm always on the lookout for some vintage dice. Thanks, Ed! Drop me an email at poleandrope@gmail.com and we'll see if we can work out an arrangement.

I figured right after the holidays would be the time to find one. Everybody's tapped moneywise so I could slip in a lowball bid and walkaway with the goods...which is what happened.

If White Box D&D is a secret handshake, then what is White Box Empire of the Petal Throne? Maybe one of those big necklace/pendant combos that show you're in the inner circle?

I just bought a White Box EPT. Now waiting excitedly for the post to deliver it, complete with the trio of big beautiful vinyl maps.

Actually, you will now be able to cast real spells, just like was foretold in the Chick Publications tract!

Welcome to the club. The key in finding OD&D sets at a reasonable price is to be patient - it sounds as if that's exactly what you did.