City-State of the Invicible Twelve-Year Old

As someone whose career involves the organization of information, I'm extremely lax to do so when it comes to my own files. However, with the new year here, I've been compiling and organizing my game notes from across the decades. These are strewn across various binders and folders, but it is my goal to create an organized filing system for them all.

Tucked away in the back of one of those folders, I chanced upon a map that I'd forgotten I still had. It is the first giant city map I ever drew and, while the exact year of its creation escapes me, it can be no earlier than 1985, as Gygax's depiction of Greyhawk in Saga of the Old City influenced a lot of this city's design.

The map consists of 6 pieces of 8.5 x 11 graph paper held together with Scotch tape and illustrated with a mix of pencil and permanent markers. All the buildings are numbered but I can't remember if I actually got around to detailing and stocking the entire city. In fact, I can't even remember the name of the place. 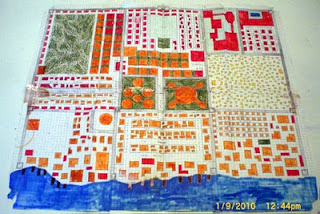 Like any good walled city, this one is composed of several different districts and quarters. The reason I know that Saga of the Old City influenced my design is because a few (the Slum, River, and Foreign) are taken right from the book. 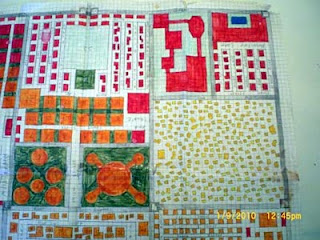 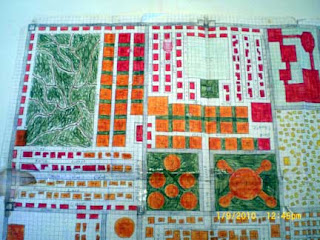 The northwest section contains the Garden District and the overlapping High and Magic Districts, and the Palace. 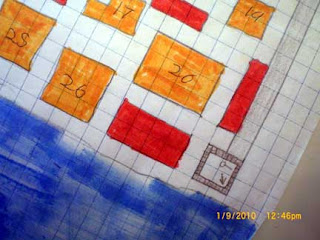 Strong defences ring the city's walls. Here we see a ballista and catapult perched atop a guard tower situated against the river. 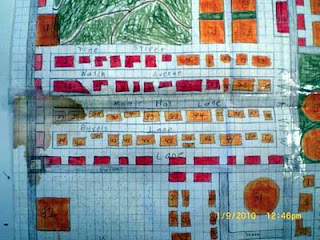 The commercial area of the Garden District. When you have some coin to spend, be sure to peruse the shops along Tree Street, Watch Avenue, Buyers Lane, Owl Bear Lane, and, my personal favorite, Magic Hat Lane. I'm pretty certain you can find a magic shop or three along that stretch of road. 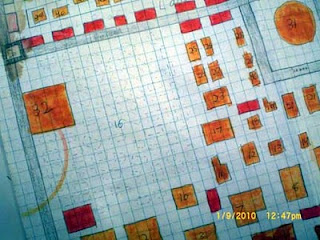 If you seek more exotic goods, a trip to the Foreign District is in order. There you will find a vast bazaar where merchants from around the world erect a maze of gaily-colored tents and stalls filled with delights. And if it's slaves you seek, auctions are held in the large hall against the western wall. 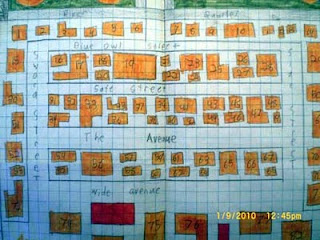 At the north end of the River Quarter, adventurers can find an array of taverns, inns, and shops catering to their professions. When the sun goes down, lights, laughter, and violence spill out from saloons, casinos, and bordellos that line The Avenue.

Every time I look back on this city, I remember the summer that I spent drawing it and the wide-eyed enthusiasm for the hobby that gripped me at that time. Some of that enthusiasm can never quite be replaced, but the map still gets me excited to visit it. While I wouldn't use this map as it is now, there remains plenty of details to re-purpose back into the campaign world--which is why I've kept it for so long. That and the nostalgia it gives me in looking upon it again.
Posted by Michael Curtis at 9:01 AM

Owl Bear Lane is where you go to get the BEST owl bears. They've also got a neat little Tapas place...

WAHT A HUGE CITY?!?!?? YOU MUST TELL OF US THE ADVENTURS THAT ARE HAD WITHIN THIS WALLS!!!! (FROM WHEN YOU ARE TWEWLVE(

I wish that I would have kept some of my first maps. I miss them so. Sadly, when I moved around after high school I lost most of my old maps and gamenotes. Never lost the enthusiasm though, but it would be nice to still retain a piece of early gaming.

This is a great bit of nostalgia, but what's really inspired me is the title of the post. Now I have to run a game set in a city run by a petulant psychic child, like the kid from that Twilight Zone episode!

Oh the scotch taped monstrosities of youth! Looks lovely - an ambitious project at that age.

Excellent! Our imaginations at that age were so innocent and boundless and not jaded by the things that become somehow important as we grow older. Thanks for sharing some of your childhood with us. :)

I once had a six-sheet (11"x17" each) fly-over map of a desert planet for Star Frontiers that I made one summer vaction. Footprints in the sand, crawler treadmarks, shadows...man!

It was fun looking at that map of yours.
--Decent setup for a contemporary game. Will we hear about its development as a product? :)

Damn that brings back memories. I was never quite that ambitious, or if I was I was too easily distracted from finishing ;)

Inspiring post, pix and title. I lost the notes and maps from my twenty-year campaign, and was heartbroken for years. It's great that you still have that great map!

Yeah.
My first map for a tunnels & trolls city called khazar was from 7th grade (I made notes on the back ofd same pages on a light table in a friend's house, and that was 7th eight, so I know the year. 1979. I played more D&D, but with that guy, more T&T.) Folded out to 15 sheets of 8 sq to the inch graph paper, everything perfectly lined up (unlike my purposefully chaotic later maps).
I did the basic info for over 700 buildings on the damn thing. And barely used it.

You've broguht back an old memory. I know where that map is, I think. Time to go digging.