Gamers possess a form of insanity that is shared with the collectors of old books. In the book trade, this mania is referred to as “the gentle madness.” It’s a subtle form of dementia which turns objects of paper, ink, cardstock and thread in fetishes worth hundreds or thousands of dollars. It is this psychosis that drives eBay auctions and causes locked cases to be installed at hobby shops.

Like many, I suffer from this gentle madness, albeit not as severely as some of my fellow gamers. I prowl the boxes at my local hobby shop, seeking out monochrome versions of classic modules. I cannot pass over a copy of Deities & Demigods without peeking inside to see if it’s one of the rare editions with the gods both Lovecraftian and Menibonéan. One of these days, when fun funds allow, I’ll pick up a copy of Outdoor Survival, just to replace the version I once owned and put it to the recommended use (my birthday’s late November…)

It is with little wonder then that, of all my gaming books, the one that I cherish the most is this one: 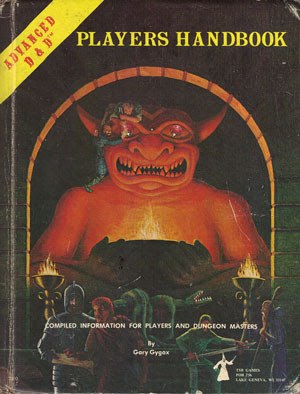 According to The Acaeum, it’s a 7th printing of the Player’s Handbook. Not exceedingly rare, but it still bears the classic Trampier cover and the wizard logo. For a book that seen heavy use, it’s in pretty good shape for something almost thirty years old.

This one is my prize simply because it is mine. It’s the first hardcover AD&D book I ever bought, not a replacement or a winning bid at auction. It has survived not only time, but several moves, two cross-country relocations, numerous dorm rooms and apartments, vindictive ex-girlfriends, flood, plague, and Acts of God. It has witnessed innumerable characters and campaigns, bad puns, spilled drinks, wildly spinning dice, and the insides of countless backpacks, satchels, boxes and car trunks.

The pages within are marked with pencil and pen, charts and tables have been underlined, an inventory of magical treasures has been written on the inside front cover in orange crayon of all things, and the stats for a monk have been scrawled in pencil on the inside back cover. The edges of the pages have been worn down with so much use that they feel like soft velvet, rather than wood and cloth pulp.

All of that history, wear and tear, and good memories are enough to have changed this one copy of a book printed by the thousands into a personal fetish. If it stopped at that, this would still be a book that I hope accompanies me throughout my remaining years. But it has one last alteration that places this codex head and shoulders above its bookshelf companions: 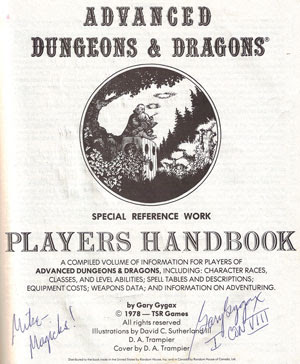 That was the only time I ever met Gary. I-Con VIII would have been sometime in the spring of 1989. I’m sorry to say that I don’t really remember much about that meeting. I remember standing on line with my friend, Pete, who had brought his Monster Manual to be signed. I remember that Gary seemed to be happy to meet with the fans and talk with them. He didn’t seem to phoning his appearance in. I seem to remember that he was wearing some sort of hideously ugly Hawaiian shirt, but that memory is suspect, as I’ve seen pictures of him at more recent conventions dressed as such, so I might be confusing the details. I am sure that he asked me what my favorite class to play was, and I’m pretty certain I told him either thieves or magic-users. But that’s about all I can recall of that one moment almost twenty years later.

It still seems strange that he’s gone and that whole generations of gamers will never have a moment like that. Of course, even if they had the chance, the emotional impact might be different. I’m sure that for some gamers, the chance to meet R.A. Salvatore might be their shining memory of game-related brushes with greatness.

I’ve heard a lot of stories about Gary over the years, some quite humorous, some not-so flattering. I’m sure that there are truths to most of them. He was human and possessed a wide variety of character strengths and flaws. But he was the Dungeon Master and he signed my Players Handbook, and that still means something to me. There are probably hundreds of other copies of books out there that bear the inscription “Mike – Magicks!” (or “Mark – Magicks!” or “Matt – Magicks!” or what-have-you), but none of those are mine. Those copies may have similar stories of adventure and great times associated with them. In fact, you might have one yourself. But there’s only one copy that sits on my shelf, asks me to come open it again, and to venture off to places undreamt of by most.
Posted by Michael Curtis at 9:01 AM

Nice! I got Mythmere to sign my S&W Core Rules in the hopes of creating something like what you already have. :D

My entry on the table would be soft multi-coloured polyhedrals from the old TSR boxed sets.

Barely randomizers? Maybe... but if anyone is making these dice now they'd be as good as rolling '01' to Pick Pockets.

Now that IS a treasure, to be certain.

Very cool! As a B/X nerd, my first AD&D PHB was the blue cover, and though I've long since picked up a couple of copies of the Tramp cover version, I still treasure that first PHB.