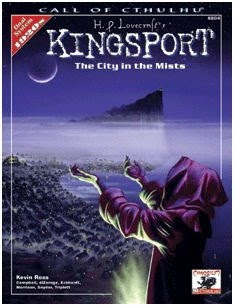 In his writings, Howard Phillips Lovecraft created a handful of quiet, yet creepy New England towns. Witch-haunted Arkham is by far the most famous, but backwoods Dunwich, infected Innsmouth, and dreamy Kingsport occupy their own places in both his Mythos and the Miskatonic Valley. Of the four, poor Kingsport is the ginger-haired step-sibling of the bunch. This mist-shrouded town on the Atlantic coast appears in just a handful of Lovecraft’s stories, and those few are neither his most famous or complex tales.

Despite its low place on the Lovecraft Country totem pole, Kingsport has a special place in my heart. I grew up along the coast of Long Island and spent much of my early years in close proximity to both the ocean and those who made their living from it. Because of this familiarity, Kingsport feels more like home to me than any other of Lovecraft’s fictional towns and villages. I can identify with both the place and the people more than shadowy Arkham or backwater Dunwich simply because I’ve rubbed elbows with folks very much like the Kingsporters, and I see identical architecture and history everywhere on Long Island.

The Call of Cthulhu supplement H.P. Lovecraft’s Kingsport is the second edition of the previously-released Kingsport, which was published in 1991. Written by Kevin Ross, Kingsport was the third book in the Lovecraft Country series of supplements spearheaded by the late Keith Herber. It is the opinion of many CoC fans that Herber was responsible (either directly or indirectly) for some of the best source material ever produced for the game – an opinion which I, myself, share. In the early years of this decade, Chaosium updated most, but not all, of the Lovecraft Country books to incorporate the D20 version of Call of Cthulhu and were published with the “Dual System” logo on the cover. This retrospective is based on the 2003 update.

Like the other dual system re-releases, H.P. Lovecraft’s Kingsport begins with selections from the Old Gent’s work to set the tone. For this book, “The Strange High House in the Mist” and “The Festival” serves as the literary introductions to Kingsport. It is only after reading these stories that the challenge that Ross must have faced in writing the supplement become apparent. Unlike the other books in the Lovecraft Country series, Kingsport suffers from a lack of canonical material to draw from. That which does exist is lacking in much detail about the town itself. This must have been both a blessing and a curse for Moss. He had a great deal of leeway in designing the game version of the town, but a very limited palette from which to choose his colors.

With the introductory fiction out of the way, the reader encounters a broad overview of Kingsport. Subjects such as climate, business hours, employment opportunities, local government, and crime are covered. While some might find entries such as the climate of Kingsport to be inessential to the book, I believe it’s little details like this that help bring the town to life, and is especially useful to those unfamiliar with the seasons in New England.

The following two chapters cover the history of Kingsport, both the well-known and the secret. It’s unsurprising that the history of Kingsport resembles that of Marblehead, Massachusetts, its real-life inspiration. Founded by colonists from southern England and the Channel Islands, Kingsport became a busy seaport and shipbuilding facility. As a port of operation for privateers during the American Revolution, Kingsport was blockaded by the British Navy, a tactic which ended when one of the town scions hauled cannons up the Kingsport Head to fire upon the British ships. In the following decades, a time when many New England towns began to embrace the Industrial Revolution, Kingsport remained wedded to the sea - a choice that would ultimately lead to its decline. After losing its status as a port of entry, the shipbuilding trade slowed and the town’s economy relied on fishing to keep the money flowing. Even this trade began to fail when the commercial fish packing plants started dominating the industry. In the 1920s, Kingsport’s biggest source of income is tourism and the town has become a summer vacation spot for both the wealthy and the artistically-inclined.

Behind its formal history lies the obligatory Mythos cult that any CoC supplement must have. Referred to only as the Kingsport cult, this group of worshippers bent knee to Tulzscha, the Green Flame. The cult is derived from Lovecraft’s tale “The Festival” and is not extensively detailed in the supplement. Part of this has to do with the lack of concrete details provided in the story and is also partially because the cult is greatly reduced in the 1920s. The Keeper is given a few suggestions but not many hard facts, which is either a positive or negative aspect of the book depending on one’s attitude towards RPG supplements.

We next come to the heart of the book, “A Guide to Kingsport.” This chapter provides a breakdown of the town’s more interesting and useful locations, detailed on a neighborhood-by-neighborhood basis. It’s this chapter (and its cousins in the other Lovecraft Country books) that truly shines. CoC doesn’t lend itself easily to sandbox-style play, but this chapter does its best to assist that method of gaming. Covering between three and twenty-plus locations in each of the nine areas of Kingsport, the chapter provides concise information about each locale. Most entries run no more than a paragraph or two, yet still pack all the pertinent information a Keeper needs once the investigators start making the rounds. My favorite part of these chapters is that the reader gets to play “Guess Where I’m From?” as he reads the entries. Minor characters and sub-references to other Lovecraft works are seeded throughout the chapter and it’s an Easter egg hunt to identify them all.

A chapter on using dreams in CoC, written by Mark Morrison, follows the guide. While not groundbreaking material, it’s nice that Morrison sprinkles his own personal experiences in the game throughout the chapter, providing the Keeper with more than just theoretical advice.

The book next provides three sample adventures which take place in and around Kingsport. These investigations are for both new and experienced investigators, and can be used as introductions to the town or as scenarios encountered by permanent residents. The adventures are “The House on the Edge,” “Dreams & Fancies,” and “Dead in the Water.”

“The House on the Edge” concerns the most famous of Kingsport’s attractions, the Strange High House. It quite literary starts off with a boom, destroying the High House with a lightning strike during a violent thunderstorm. On first glance, I thought this was very cavalier of the author, especially since this scenario is an introduction to Kingsport. Wiping the House out right off the bat is bound to disappoint some readers. Reflecting on it, however, I see the wisdom in it. Investigators, unlike the residents of Kingsport, are not going to be content to leave the House alone. This is especially true when you consider that any CoC player who’s familiar with Lovecraft’s work knows that the House is one of the more benign locations in Lovecraft Country. It’s probably for the best to address the issue of the High House immediately and move on. The investigation does have one wrinkle which might not appeal to all players, namely the need to cover the same ground twice, albeit with very different results. Some players, myself included, don’t like being forced to retrace our steps simply because the plot requires it.

“Dreams & Fancies” involves Kingsport’s close proximity to the Dreamlands and is design to reinforce the power dreams have here and sense of otherness that pervades the town. Starting with a seemingly mundane suicide, the investigators find themselves involved with Kingsport’s seasonal artist colony and the lines between dreams and reality quickly fade. This could be a very memorable investigation in the hands of an adept Keeper.

“Dead in the Water” is a refreshing change of pace from CoC’s standard Mythos menace scenarios. There’s strange things going on at sea and the investigators are hired to get to the bottom of matters. Some overconfident players might assume they know who’s behind the doings, given Kingsport’s seaside location and the fact that Innsmouth’s just up the coast, but never take anything for granted in Lovecraft Country. I suspect that John Carpenter’s The Fog might have been the seed from which this adventure grew, but that could be my own influences speaking. Properly run, “Dead in the Water” could be the best of the three adventures. Poorly run, it’s an episode of Scooby-Doo.

The book finishes with a chapter of D20 system stats for the various residents and creatures that call Kingsport home. I’m biased here, but whenever I read the dual system books for CoC, I’m always struck by how clunky the D20 rules look next to the BRP system. Obviously, the D20 rules are trying to conform with the original text, but its jarring for me nonetheless.

Being a Chaosium Call of Cthulhu book, H.P. Lovecraft’s Kingsport wouldn’t be complete without the fiddly bits. A poster-sized player’s map of the town and a tourist brochure issued by the Chamber of Commerce are included as hand-outs.

So what do we make of Kingsport? Is it worth shelling out some Innsmouth gold for? The answer to that question depends on what the Keeper has planned for the campaign. In a bog-standard “Ayeee!” gibber-gibber, Call of Cthulhu game, Kingsport is best suited as an investigation location rather than the PCs place of residence. Arkham has more to offer both in resources (Kingsport has no sanitarium) and adventure possibilities. A summer trip to Kingsport as a break from mind-rending horrors is a nice change of pace, but I wouldn’t want to live there.

If you’re planning on a campaign that’s more attached to the Dreamlands, however, Kingsport makes a great starting location for such a game and I’d recommend the book heartily. The dreamlike quality of the seaside town makes it the perfect threshold from which to enter the Dreamlands and to conduct further explorations of that realm from. It’s a shame that the supplement isn’t available in .pdf, as tracking down a print copy seems to be growing more difficult.

Join me next time as I head up the beach for a look at Innsmouth. Bring along your overcoat and fedora and start practicing your “Innsmouth Slouch.” It’s best not to stand out in that place.
Posted by Michael Curtis at 9:01 AM

Chaosium really put out some great stuff for the game back in the Herber days. I've got most of the CoC books Chaosium published in the 90's - they're the most prized books in my massive RPG collection. Unfortunately, I haven't done more than skim most of them. (The biggest exceptions being Arkham Unveiled and Mansions of Madness.) I think I need to start spending more quality time with my collection, starting with Kingsport...

Oh, how I envy you Mike, who actually actually have something to look back at and recognize the kind of locales that HPL writes about. For me it's very fuzzy in my mind's eye, even after I have read the stories.

I find it interesting that you mention sandboxes and styles of play. That's part of that well known poisoned well from which I just drank, once again...